Deep neural networks are, by nature, [black boxes]This serves as a barrier for adoption in applications where the interpretability of a model is essential. It also presents difficulties for analyzing and improving the structure of the model. In this paper, DeepLIFT method is presented to decompose the output of a neural network on a specific input by backpropagating the contributions of all neurons in the network to every feature of the input. DeepLIFT compares the activation of each neuron to its ‘reference activation’ and assigns contribution scores according to the difference. This is a form of sensitivity analysis and it helps to better understand the model.

DeepLIFT seeks to explain a difference in output, from some reference output, based on the differences of the input. Concisely, what varied in the input which caused the observed variance of the input? Definitionally, this requires a reference input-output, which is meant to serve as the "default." A mathematical formulation is derived such that the differences in an output neuron can be decomposed into the contributions of the previous neurons. In order for DeepLIFT to provide useful information, a relevant reference must be selected. This selection, practically speaking, should be made by a domain expert; it is the answer to the question "What are we interested in measuring differences against?" It also may be necessary, in practice, to try several references in order to achieve desired results (for instance, using the CIFAR-10 dataset, an all 0 (black image) reference highlighted "hard-to-interpret" pixels in the background, while a blurred version of an original image outlined key objects). 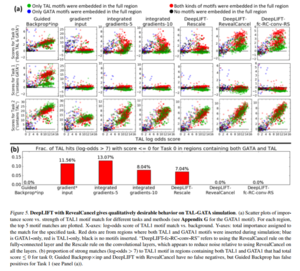