Deep Neural Networks (DNN) have shown remarkable performance in several areas such as computer vision, natural language processing, among others; however, improvements over previous benchmarks have required extensive research and experimentation by domain experts. In DNN the composition of linear and nonlinear functions produces internal representations of data who are in most cases better than handcrafted ones; consequently, researchers using Deep Learning techniques have lately shifted their focus from working on input features to designing optimal DNN architectures. However, the quest for finding an optimal DNN architecture by combining layers and modules requires frequent trial and error experiments, a task that resembles the previous work on looking for handcrafted optimal features. As researchers aim to solve more difficult challenges the complexity of the resulting DNN is also increasing; therefore, some studies are introducing the use of automated techniques focused on searching for optimal architectures.

Lately, the use of algorithms for finding optimal DNN architectures has attracted the attention of researchers who have tackled the problem through four main groups of techniques. The first operates over the random DNN candidate’s weights and involves the use of an auxiliary HyperNetwork which maps architectures to feasible sets of weights and consequently allows an early evaluation of random DNN candidates. The second technique is Monte Carlo Tree Search (MCTS) who repeatedly narrows the search space by focusing on the most promising architectures previously seen. The third group of techniques use evolutionary algorithms where a fitness criteria is applied to filter the initial population of DNN candidates, then new individuals are added to the population by selecting the best performing ones and modifying them with one or several random mutations [Real, 2017]. The fourth and last group of techniques implement Reinforcement Learning where a policy based controller seeks to optimize the expected accuracy of new architectures based on rewards (accuracy) gained from previous proposals in the architecture space. From these four groups of techniques, Reinforcement Learning has offered the best experimental results; however, the paper we are summarizing implements evolutionary algorithms as its main approach.

Despite the technique used to look for an optimal architecture, searching in the architecture space usually requires the training and evaluation of many DNN candidates; therefore, it demands huge computational resources and pose a significant limitation for practical applications. Consequently, most techniques narrow the search space with predefined heuristics, either at the beginning or dynamically during the searching process. In the paper we are summarizing, the authors reduce the number of feasible architectures by forcing a hierarchical structure between network components. In other words, each DNN suggested as a candidate is formed by combining basic building blocks to form small modules, then the same basic structures introduced on the building blocks are used to combine and stack networks on the upper levels of the hierarchy. This approach allows the searching algorithm to sample highly complex and modularized networks similar to Inception or ResNet.

Despite some weaknesses regarding the efficiency of evolutionary algorithms, this study reveals that in fact these techniques can generate architectures who show competitive performance when a narrowing strategy is imposed over the search space. Accordingly, the main contributions of this paper are a well defined set of hierarchical representations who acts as the filtering criteria to pick DNN candidates and a novel evolutionary algorithm who produces image classifiers that achieve state of the art performance among similar evolutionary-based techniques.

All the evaluated network architectures are directed acyclic graphs with only one source and one sink. Each node in the network represents a feature map and consequently each directed edge represents an operation that takes the feature map in the departing node as input and outputs a feature map on the arriving node. Under the previous assumption, any given architecture in the narrowed search space is formally expressed as a graph assembled by a series of operations (edges) among a defined set of adjacent feature maps (nodes).

Accordingly, these motifs can also be combined to form more complex motifs on a higher level in the hierarchy until the network is complex enough to perform competitively in challenging classification tasks.

The composition of more complex motifs based on simpler motifs at lower levels allows the authors to create a hierarchy-like representation of very complex DNN starting with only few primitive operations. In other words, an architecture with L levels has only primitive operations at its bottom and only one (very complex) motif at its top. Any motif in between the bottom and top levels can be defined as the composition of motifs in lower levels of the hierarchy. 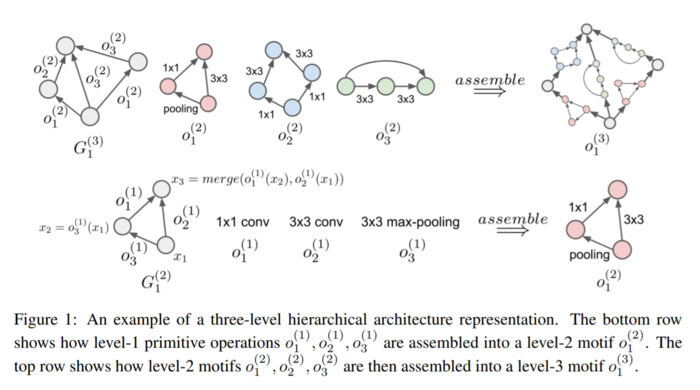 The six primitive operations used as building blocks are:

The authors argue that convolution operations involving larger receptive fields can be obtained by the composition of lower-level motifs with smaller receptive fields. Accordingly, convolution operations considering a large number of channels can be generated by the depthwise concatenation of lower-level motifs. Batch normalization and ReLU activation function are applied after each convolution in the network.

Before moving forward we introduce the concept of genotypes in the context of the article. In this article a genotype is a particular neural network architecture defined according to the components described in section 2. In order to make the NN architectures “evolve” the authors implemented a three stages process that includes establishing the permitted “mutations”, creating an initial population and make them “compete” in a tournament where only the best candidates will survive.

One mutation over a specific architecture is a sequence of five changes in the following order:

An initial population is required to start the evolutionary algorithm; therefore, the authors introduced a trivial genotype composed only of identity mapping operations. Then a large number of random mutations was run over the “trivial genotype” to simulate a diversification process. The authors argue that this diversification process generates a representative population in the search space and at the same time prevents the use of any handcrafted NN structures. Surprisingly, some of these random architectures show a performance comparable to the performance achieved by the architectures found later during the evolutionary search algorithm.

Tournament selection and random search are the two search algorithms used by the authors. In one iteration of the tournament selection algorithm 5% of the entire population is randomly selected, trained, and evaluated against a validation set. Then the best performing genotype is picked to go through the mutation process and put back into the population. No genotype is ever removed from the population, but the selection criteria guarantees that only the best performing models will be selected to “evolve” through the mutation process. In the random search algorithm every genotype from the initial population is trained and evaluated, then the best performing model is selected. In contrast to the tournament selection algorithm, the random search algorithm is much simpler and the training and evaluation process for every genotype can be run in parallel to reduce search time.

The second auxiliary algorithm is called the worker and is in charge of training and evaluating each genotype.

Both auxiliary algorithms work together asynchronously and communicate each other through a shared tabular memory file where genotypes and corresponding fitness are recorded.

Instead of a looking for a complete NN model, the search framework introduced in section 2 is applied to look for the best performing architectures of a small neural network module called convolutional cell. Using small modules as building blocks to form a larger and more complex model is an approach proved to be successful in previous cases such as the Inception architecture. Additionally, this approach allowed the authors to evaluate cell candidates efficiently and scale to larger and more complex models faster.

In total three models were implemented as hosts for the experimental cells, the first two use the CIFAR-10 dataset and the third uses the ImageNet dataset. The search framework is implemented only in the first host model to look for the best performing cells (section 4.2), once found, these cells were inserted into the second and third host models to evaluate overall performance on the respective datasets (section 4.3).

The terms training time step, initialization time step, and evolutionary time step will be used to describe some parts of the experiments. Be aware that these three terms have different meanings; however, each term will be properly defined when introduced.

The overall goal in this stage is to find the best performing cells. The search framework is run using the small CIFAR-10 as host model for the cells; therefore, during the searching process only the cells change while the rest of the host model’s structure remains the same. In the context of the evolutionary search algorithm, a cell is also called a candidate or a genotype. Additionally, on every time step during the search process the three cells in the model will share the same structure and consequently every time a new candidate architecture is evaluated the three cells will simultaneously adopt the new candidate’s architecture. 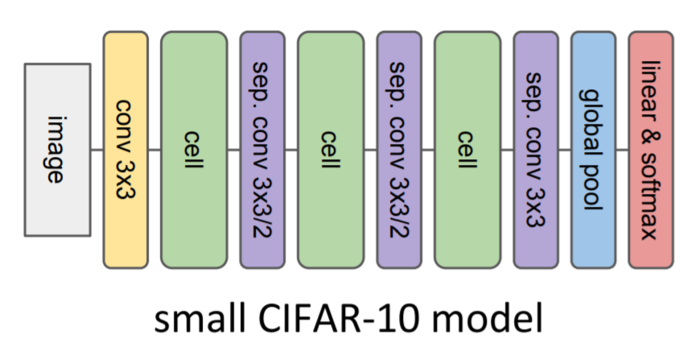 To begin the architecture searching process an initial population of genotypes is required. Random mutations are applied over a trivial genotype to generate a candidate and grow the seminal population. This is called an initialization step and is repeated 200 times to produce an equivalent number of candidates. Creating these 200 candidates with random structures is equivalent to running random search over a constrained architecture space.

Then, the evolutionary search algorithm takes over and runs from timestep 201 up to time step 7000, these are called evolutionary timesteps. On each evolutionary time step, a group of genotypes equivalent to 5% of the current population is selected randomly and sent to the tournament for fitness computation. To perform fitness evaluation each candidate cell is inserted into the three predefined positions within the small CIFAR-10 host model. Then for each candidate cell the host model is trained with stochastic gradient descent during 5000 training steps and decreasing learning rate. Due to a small standard deviation of up to 0.2% found when evaluating the exact same model, the overall fitness is obtained as the average of four training-evaluation runs. Finally, a random mutation is applied over a copy of the best cell within the group to create a new genotype that is added to the current population.

The fitness of each evaluated genotype is recorded in the shared tabular memory file to avoid recalculation in case the same genotype is selected again in a future evolutionary time step.

The current fitness plot shows the fitness achieved by the best performing cell from each one of the three types of cells when plugged in the small CIFAR-10 model. Even though the fitness grows rapidly after the first 200 (initialization) time steps, it tends to plateau between 89% to 90%. Overall, cells that follow a flat representation without restriction in the number of parameters tend to perform better than those following a hierarchical structure. It could be due to the fact that the flat representation allows more flexibility when adding connections between nodes, specially between distant ones. Unfortunately, the authors do not describe the architecture of the best performing flat cell. 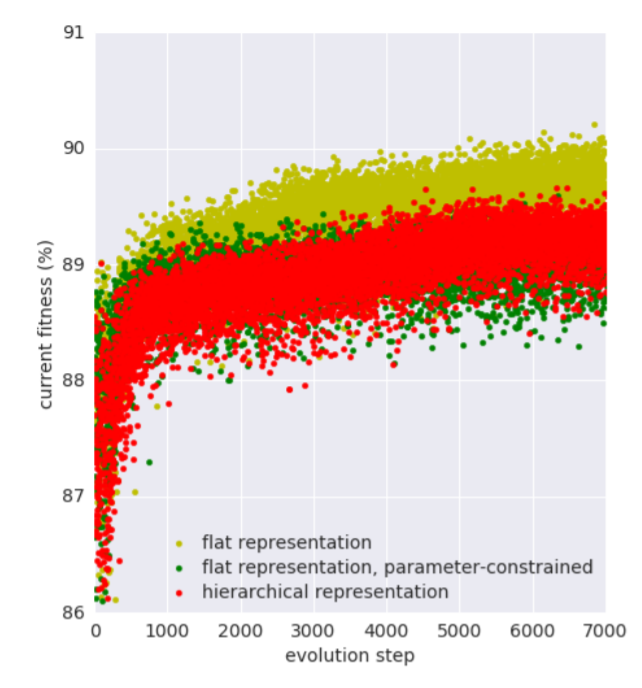 The maximum fitness plot depicts the best fitness seen by the search framework in each one of the three types of cells, the fitness at time step 200 is therefore equivalent to the best model obtained by a random search over 200 architectures from each type of cell. 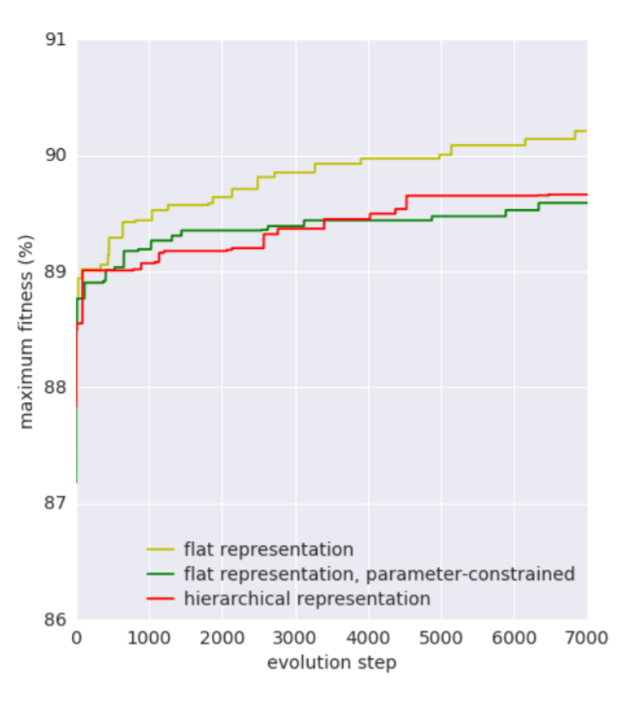 The plot shows the total number of parameters used by each genotype at any given time step. It suggests that flat representations tend to add more connections over time and most likely those connections correspond to convolutional operations which in turn require more parameters than other primitive operations. 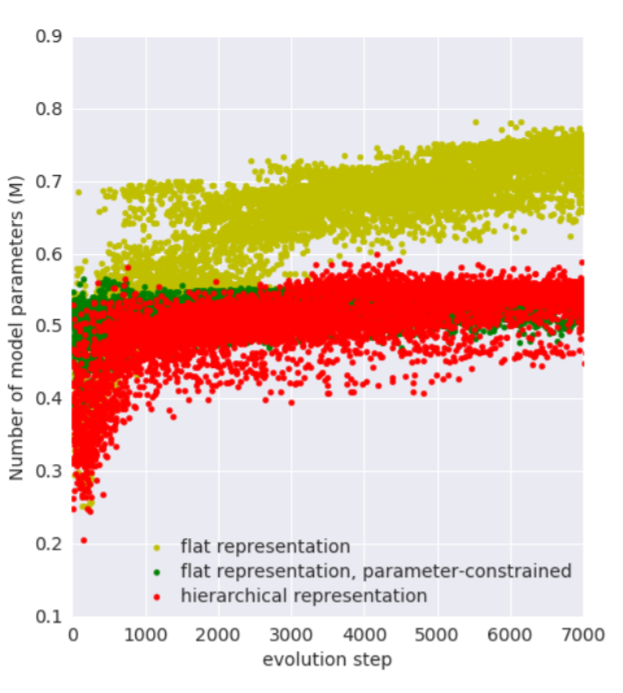 To run each time step (either initialization or evolutionary) in the search framework, it takes one hour for a GPU to perform four training and evaluation rounds for each single candidate. Therefore, the authors used 200 GPUs simultaneously to complete 7000 time steps in 35 hours. Considering the three types of cell (hierarchical, flat, and parameter-constrained flat), approximately 20000 GPU-hours could be required to replicate the experiment.