Reinforcement learning (RL) is one of the three basic machine learning paradigms, alongside supervised and unsupervised learning. It refers to training a neural network to make a series of decisions dependent on a complex, evolving environment. Typically, this is accomplished by 'rewarding' or 'penalizing' the network based on its behavior over time. Intelligent agents are able to accomplish tasks that may not have been seen in prior experiences. For recent reviews of reinforcement learning, see [3,4]. One way to achieve this is to represent the world based on past experiences. In this paper, the authors propose an agent that learns long-horizon behaviors purely by latent imagination and outperforms previous agents in terms of data efficiency, computation time, and final performance. Along with the latent space representation, an actor-critic model is used to learn the reaction and optimize the behavior of the agent. The proposed method is based on model-free RL with latent state representation that is learned via prediction. The term "model-free" in RL refers to not having an explicit model of the environment and its dynamics - there is still a model of the agent being learned. The authors have changed the belief representations to learn a critic, or value function, directly on latent state samples which help to enable scaling to more complex tasks.

The main finding of the paper is that long-horizon behaviors can be learned by latent imagination. This avoids the short sightedness that comes with using finite imagination horizons. The authors have also managed to demonstrate empirical performance for visual control by evaluating the model on image inputs.

In many problems, the amount of actions an agent is able to take while learning is limited, for example due to computational resource limitations, sensitivity of the environment, or physical resource constraints. Thus, it is difficult to sufficiently interact with the environment until an accurate representation of the world is learned. The proposed method in this paper aims to solve this problem by "imagining" the states and rewards that an action will provide. That is, given a state [math]S_t[/math], the proposed method generates \[ \hat{A}_t, \hat{R}_t, \hat{S}_{t+1}, \ldots \]

The authors of the paper call their method Dreamer. From a high-level perspective, Dreamer first learns latent dynamics from past experience. Then it learns actions and states from imagined trajectories to maximize future action rewards. Finally, it predicts the next action and executes it. This whole process is illustrated below. 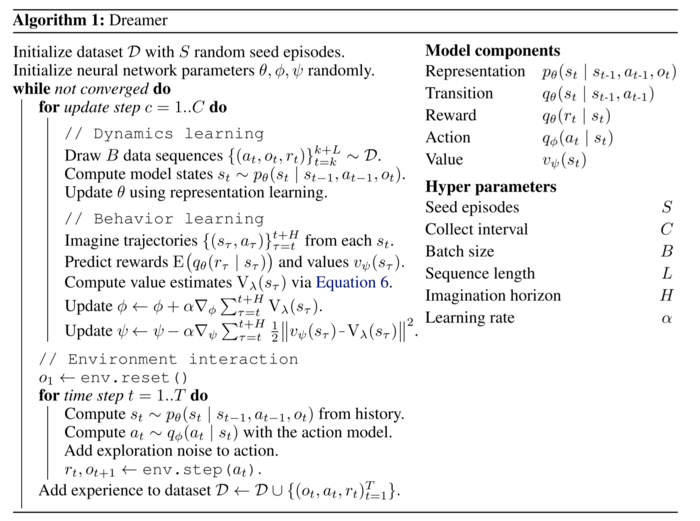 The paper formulates visual control as a so-called Partially Observable Markov Decision Processs (POMDP) in discrete time. Since the goal is for an agent to maximize its sum of rewards in a Markovian setting, this puts the model squarely in the category of reinforcement learning. In this subsection we provide a lengthier discussion on this Markovian assumption.

The figure below summarizes Dreamer's performance compared to other state-of-the-art reinforcement learning agents for continuous control tasks. Using the same hyper parameters for all tasks, Dreamer exceeds previous model-based and model-free agents in terms of data-efficiency, computation time, and final performance. Overall, it achieves the most consistent performance among competing algorithms. Additionally, while other agents heavily rely on prior experience, Dreamer is able to learn behaviours with minimal interactions with the environment.

This paper presented a new algorithm for training reinforcement learning agents with minimal interactions with the environment. The algorithm outperforms many previous algorithms in terms of computation time and overall performance. This has many practical applications as many agents rely on prior experience which may be hard to obtain in the real-world. For example, consider a reinforcement learning agent who learns how to perform rare surgeries without enough data samples. This paper shows that it is possible to train agents without requiring many prior interactions with the environment.

As future work on representation learning, the ability to scale latent imagination to higher visual complexity environments can be investigated.

Learning a policy from visual inputs is a quite interesting research approach in RL. This paper steps in this direction by improving existing model-based methods (the world models and PlaNet) using the actor-critic approach. However, their method was an incremental contribution as back-propagating gradients through values and dynamics has been studied in previous works.