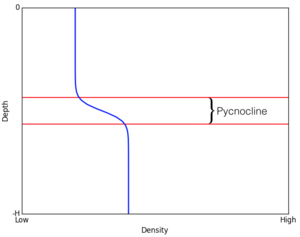 In the context of fluid mechanics, stratification refers to the spatial variation of density of a given fluid. A fluid is said to be stably stratified if density increases monotonically with depth (dense fluid is never above light fluid) and unstably stratified otherwise. A common feature in stratified water is a pycnocline, which is the location of a sharp transition in density. The figure to the left illustrates a sample stable stratification that uses a vertical tanh profile (blue) and outlines the pynocline in red. Outside of the pycnocline the density is nearly constant, while within the pycnocline the density changes rapidly.