Difference between revisions of "what game are we playing" 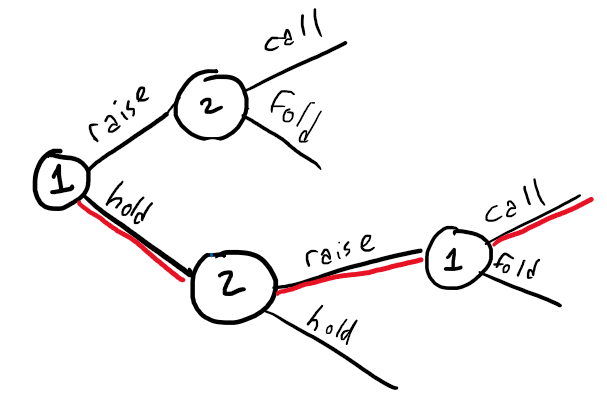 Next they investigated extensive form games using the one-Card Poker (with imperfect information) introduced in the previous section. In the experimental setup, they used a deck stacked non-uniformly (meaning repeat cards were allowed). Their goal was to learn this distribution of cards from observations of many rounds of the play. Different from the distribution of cards dealt, the method built in the paper is more suited to learn the player’s perceived or believed distribution of cards. It may even be a function of contextual features such as demographics of players. Three experiments were run with [math] n=4 [/math]. Each experiment comprised 5 runs of training, with same weights but different training sets. Let [math] d \in \mathbb{R}^{n}, d \ge 0, \sum_{i} d_i = 1 [/math] be the weights of the cards. The probability that the players are dealt cards [math] (i,j) [/math] is [math] \frac{d_i d_j}{1-d_i} [/math]. This distribution is asymmetric between players. Matrix [math] P, E, F [/math] for the case [math] n=4 [/math] are presented in [1]. With training for 2500 epochs, the mean squared error of learned parameters (card weights, [math] u, v [/math] ) are averaged over all runs of and are presented as following [1]: