In this paper the effect of the convolutional network depth on its accuracy in the large-scale image recognition setting is investigated. It was demonstrated that the representation depth is beneficial for the classification accuracy and the main contribution is a thorough evaluation of networks of increasing depth using a certain architecture with very small (3×3) convolution filters. Basically, they fix other parameters of the architecture, and steadily increase the depth of the network by adding more convolutional layers, which is feasible due to the use of very small (3 × 3) convolution filters in all layers. As a result, they come up with significantly more accurate ConvNet architectures. 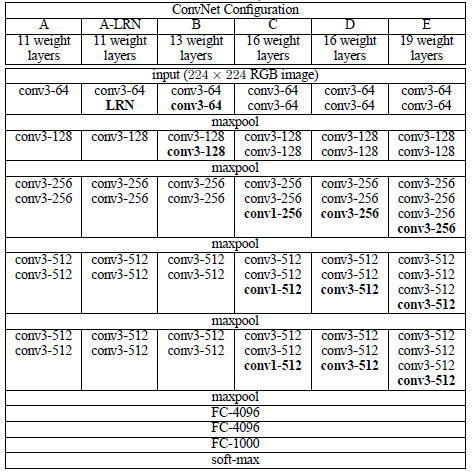 Training is carried out by optimizing the multinomial logistic regression objective using mini-batch gradient descent with momentum. Initial weights for some layers were obtained from configuration “A” which is shallow enough to be trained with random initialization. The intermediate layers in deep models were initialized randomly. In spite of the larger number of parameters and the greater depth of the introduced nets, these nets required relatively less epochs to converge due to the following reasons: (a) implicit regularisation imposed by greater depth and smaller conv. filter sizes. (b) using pre-initialisation of certain layers.

Very deep ConvNets are introduced in this paper. The results show that the configuration has good performance on classification and localization and significantly outperform the previous generation of models, which achieved the best results in the ILSVRC-2012 and ILSVRC-2013 competitions. They also showed that their configuration is applicable to some other datasets.