However, widening an LSTM or adding layers to it usually introduces additional parameters, which in turn increases the time required for model training and evaluation. As an alternative, this paper <Wider and Deeper, Cheaper and Faster: Tensorized LSTMs for Sequence Learning> has proposed a model based on LSTM called the Tensorized LSTM in which the hidden states are represented by tensors and updated via a cross-layer convolution.

We consider the time-series prediction task of producing a desired output [math]y_t[/math] at each time-step t∈ {1, ..., T} given an observed input sequence [math]x_{1:t} = {x_1,x_2, ···, x_t}[/math], where [math]x_t∈R^R[/math] and [math]y_t∈R^S[/math] are vectors. RNNs learn how to use a hidden state vector [math]h_t ∈ R^M[/math] to encapsulate the relevant features of the entire input history x1:t (indicates all inputs from the initial time-step to the final step before predication - illustration given below) up to time-step t.

The update of the hidden state h_t is defined as:

[math]W^h∈R^{(R+M)\times M} [/math] guarantees each hidden state provided by the previous step is of dimension M. [math] a_t ∈R^M [/math] is the hidden activation, and φ(·) is the element-wise hyperbolic tangent. Finally, the output [math] y_t [/math] at time-step t is generated by:

where [math]W^y∈R^{M×S}[/math] and [math]b^y∈R^S[/math], and [math]\varphi(·)[/math] can be any differentiable function. Note that the [math]\phi[/math] is a non-linear, element-wise function which generates hidden output, while [math]\varphi[/math] generates the final network output.

One shortfall of RNN is the problem of vanishing/exploding gradients. This shortfall is significant, especially when modeling long-range dependencies. One alternative is to instead use LSTM (Long Short-Term Memory), which alleviates these problems by employing several gates to selectively modulate the information flow across each neuron. Since LSTMs have been successfully used in sequence models, it is natural to consider them for accommodating more complex analytical needs. 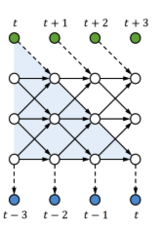 where [math]C_{t-1}[/math] is padded with the boundary values to retain the stored information.

Note the paper also employed a softmax function ς(·) to normalize the channel dimension of [math]Q_t[/math]. which can also stabilize the value of memory cells and help to prevent the vanishing/exploding gradients. An illustration is provided below to better illustrate the process: 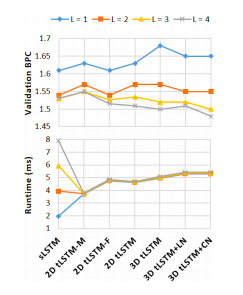 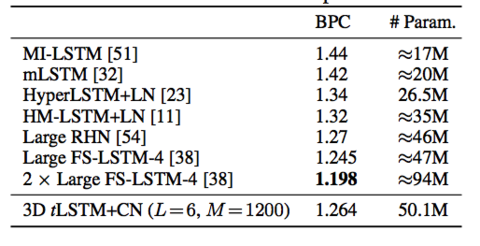 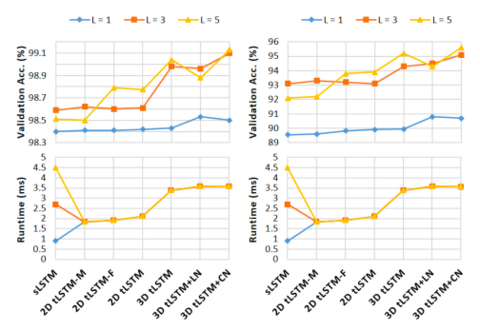 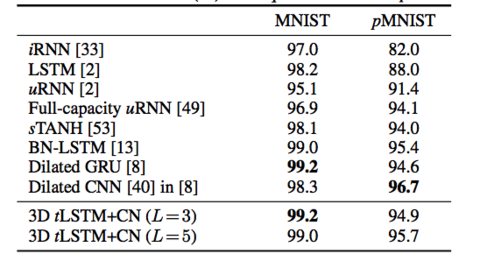 It can be seen in the above figure that tLSTM behaves differently with different tasks:

- Wikipedia: the input can be carried to the output location with less modification if it is sufficient to determine the next character, and vice versa

- addition: the first integer is gradually encoded into memories and then interacts (performs addition) with the second integer, producing the sum

- memorization: the network behaves like a shift register that continues to move the input symbol to the output location at the correct timestep

- sequential MNIST: the network is more sensitive to the pixel value change (representing the contour, or topology of the digit) and can gradually accumulate evidence for the final prediction

- sequential pMNIST: the network is sensitive to high value pixels (representing the foreground digit), and we conjecture that this is because the permutation destroys the topology of the digit, making each high value pixel potentially important.

From the figure above it can can also be observe some common phenomena in all tasks:

The paper introduced the Tensorized LSTM, which employs tensors to share parameters and utilizes the temporal computation to perform the deep computation for sequential tasks. Then validated the model on a variety of tasks, showing its potential over other popular approaches. The paper shows a method to widen and deepen the LSTM network at the same time and the following 3 points list their main contributions: