The main reason behind the recent success of LSTM (Long Short-Term Memory Networks) and deep neural networks, in general, has been their ability to model complex and non-linear interactions. Our inability to fully comprehend these relationships has led to these state-of-the-art models being regarded as black-boxes. The paper "Beyond Word Importance: Contextual Decomposition to Extract Interactions from LSTMs" by W. James Murdoch, Peter J. Liu, and Bin Yu proposes an interpretation algorithm called Contextual Decomposition(CD) for analyzing individual predictions made by the LSTMs without any change to the underlying original model. The problem of sentiment analysis is chosen for the evaluation of the model.

There has been research trying to develop methods to understand the evaluations provided by LSTMs. Some of them are in line with the work done in this particular paper while others have followed some different approaches.

Approaches similar to the one provided in this paper - All of the approaches in this category have tried to look into computing just the word-level importance scores with varying evaluation methods.

Focussing on analyzing the gate activations:

Over the past few years, LSTM has become a core component of neural NLP system and sequence modeling systems in general. LSTMs are a special kind of Recurrent Neural Network(RNNs) which in many cases work better than the standard RNN by solving the vanishing gradient problem. To put it simply they are much more efficient in learning long-term dependencies. Like a standard RNN, LSTMs are made up of chains of repeating modules. The difference is that the modules are little more complicated. Instead of having one neural network layer like in RNN, they have four (called gates), interacting in a special way. Additionally, they have a cell state which runs through the entire chain of the network. It helps in managing the information from the previous cells in the chain.

After processing the full sequence of words, the final state [math]h_T[/math] is fed to a multinomial logistic regression, to return a probability distribution over C classes.

CD decomposes the output of the LSTM into a sum of two contributions:

One important thing that is crucial to understand that this method does not affect the architecture or the predictive accuracy of the model in any way. It just takes the trained model and tries to break it down into the two components mentioned above. It takes in a particular phrase that the user wants to understand or the entire sentence.

Now let's define this more formally. Let the arbitrary input phrase be [math]x_q, ..., x_r[/math], where [math]1 \leq q \leq r \leq T [/math], where T represents the length of the sentence. CD decomposes the output and cell state ([math]c_t, h_t [/math]) of each cell into a sum of 2 contributions as shown in the equations below.

At this stage we need to make an assumption that the non-linear operations at the gate can be represented in a linear fashion. How this is done will be explained in a later part of the summary. Therefore writing equations 1 as a linear sum of contributions from the inputs we have \begin{align} i_t &= \sigma(W_ix_t + V_ih_{t−1} + b_i) \\ & = L_\sigma(W_ix_t) + L_\sigma(V_ih_{t−1}) + L_\sigma(b_i) \end{align}

Since we are able to calculate gradients values recursively in LSTMs, we would use the same procedure to recursively compute the decompositions with the initializations [math]\beta_0 = \beta_0^c = \gamma_0 = \gamma_0^c = 0[/math]. The derivations can vary a little depending on cases whether the current time step is containted within the phrase ([math] q \leq t \leq r [/math]) or not([math] t \lt q, t \gt r[/math]).

So essentially what we are going to do now is linearize each of the gates, then expand the product of sums of these gates and then finally grouping the terms we get depending on which type of interaction they represent (solely from phase, solely from other factors and a combination of both).

Terms are determined to be derived solely from the specific phrase if they involve products from some combination of [math]\beta_{t-1}, \beta_{t-1}^c, x_t[/math] and [math] b_i [/math] or [math] b_g [/math](but not both). In the other case when t is not within the phrase, products involving [math] x_t [/math] are treated as not deriving from the phrase.

Thus we can represent [math]c_t[/math] as

So once we have the decomposition of [math] c_t [/math], then we can rather simply calculate the transformation of [math] h_t [/math] by linearizing the [math] tanh[/math] function. Again at this point, we just assume that a linearizing function for [math] tanh [/math] exists. Similar to the decomposition of the forget and input gate we can decompose the output gate as well but empirically it was found that it did not produce improved results. So finally [math] h_t [/math] can be written as

We can similarly derive [math] L_{\sigma} [/math]. An important empirical observation to note here is that in the case when one of the terms of the decomposition is a bias, improvements were seen when restricting to permutations where the bias was the first term. In our case, the value of N only ranges from 2 to 4, which makes the linearization take very simple forms. An example of a case where N=2 is shown below.

As mentioned earlier, the empirical validation of CD is done on the task of sentiment analysis. The paper tries to acknowledge the following 3 tasks with the experiments:

An important fact worth mentioning again is that the primary objective of the paper is to produce meaningful interpretations on a pre-trained LSTM model rather than achieving the state-of-the-art results on the task of sentiment analysis. Therefore standard practices are used for tuning the models. The models are implemented in Torch using default parameters for weight initializations. The model was trained using Adam with the learning rate of 0.001 using early stopping on the validation set. Additionally, a bag of words linear model was used.

All the experiments were performed on the Stanford Sentiment Treebank(SST) dataset and the Yelp Polarity(YP) dataset. SST is a standard NLP benchmark which consists of movie reviews ranging from 2 to 52 words long. The LSTM model attained an accuracy of 87.2% whereas the logistic regression model with the bag of words features attained an accuracy of 83.2%. In the case of YP, the task is to perform a binary sentiment classification task. The reviews considered were only which were of at most 40 words. The LSTM model attained a 4.6% error as compared the 5.7% error for the regression model.

The interpretations are compared with 4 state-of-the-art baselines for interpretability.

Logistic regression(LR) coefficients while being sufficiently accurate are considered the gold standard for interpretability. The way LR is applied to say a task of sentiment analysis is by checking the ordering of words given by their values of the coefficients. Thus we would expect the CD scores extracted from an LSTM, to have meaningful relationships and comparison with the logistic regression coefficients. This comparison is done using scatter plots(Fig ) which measures the Pearson correlation coefficient between the importance scores extracted by LR coefficients and LSTM. This is done for multiple words which are represented as a point in the scatter plots. For SST, CD and Integrated Gradients, with correlations of 0.76 and 0.72, respectively, are substantially better than other methods, with correlations of at most 0.51. On Yelp, the gap is not as big, but CD is still very competitive, having correlation 0.52 with other methods ranging from 0.34 to 0.56. The complete results are shown in Table 4.

A phrase is considered to be of at most 5 words. First, the paper shows that the existing methods are not able to recognize sub-phrases in a phrase with different sentiments. For example, consider the phrase "used to be my favorite". The word "favorite" is strongly positive which is also shown by it having a high linear regression coefficient. Nonetheless, the existing methods identify "favorite" being highly negative or neutral in this context. However, as shown in table 1 CD is able to correctly identify it being strongly positive, and the phrase "used to be" as highly negative. This particular identification is itself the main reason of using the LSTMs over other methods in text comprehension. Thus, it is quite important that an interpretation algorithm is able to properly uncover how these interactions are being handled. A search across the datasets is done to find similar cases where a negative phrase contains a positive sub-phrase and vice versa. Phrases are scored using the logistic regression over n-gram features and included if their overall score is over 1.5. 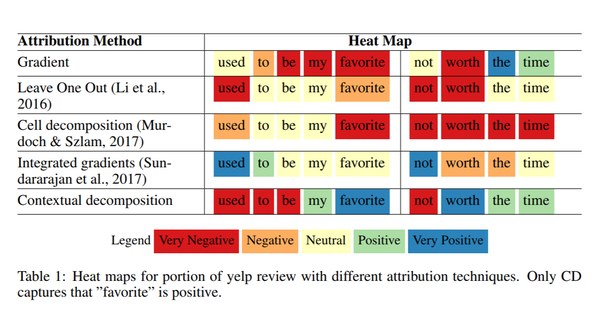 The paper now studies the cases where a sizable portion of a review(between one and two-thirds) has a different polarity from the final sentiment. An example is shown in Table 2. SST contains phrase-level sentiment labels too. Therefore the authors conduct a search in SST where a sizable phrase in a review is of the opposite polarity than the review-level label. The figure shows the distribution of the resulting positive and negative phrases for different attribution methods. We should note that a successful interpretation method would have a sizeable gap between these two distributions. Notice that the previous methods fail to satisfy this criterion. The paper additionally provides a two-sample Kolmogorov-Smirnov one-sided test statistic, to quantify this difference in performance. This statistic is a common difference measure for the difference of distributions with values ranging from 0 to 1. As shown in Figure 3 CD gets a score of 0.74 while the other models achieve a score of 0(Cell decomposition), 0.33(Integrated Gradients), 0.58(Leave One Out) and 0.61(gradient). The methods leave one out and gradient perform relatively better than the other 2 baselines but they were the weakest performers in the unigram scores. This inconsistency in other methods performance further strengthens the superiority of CD. 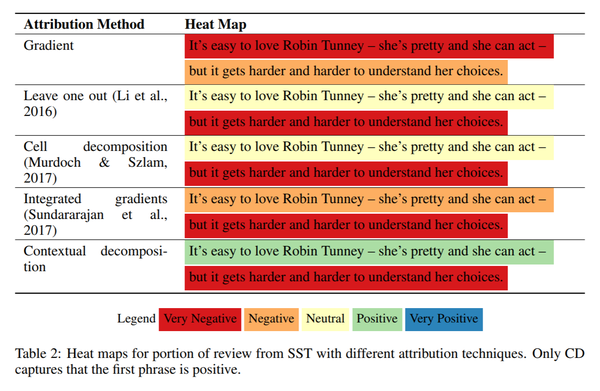 The paper also shows a way to empirically show how the LSTMs capture negations in a sentence. To search for negations, the following list of negation words were used: not, n’t, lacks, nobody, nor, nothing, neither, never, none, nowhere, remotely. Again using the phrase labels present in SST, we search over the training set for instances of negation. Both the positive as well as negative negations are identified. For a given negation phrase, we extract a negation interaction by computing the CD score of the entire phrase and subtracting the CD scores of the phrase being negated and the negation term itself. The resulting score can be interpreted as an n-gram feature. Apart from CD, only leave one out is capable of producing such interaction scores. We present the distribution of extracted scores in Figure 1. For CD there is a clear distinction between positive and negative negations. Leave one out is able to capture some of the interactions, but has a noticeable overlap between positive and negative negations around zero, indicating a high rate of false negatives.

A key aspect of the CD algorithm is that it helps us learn the value of [math] \beta_t [/math] which is essentially a dense embedding vector for a word or a phrase. Therefore, using similarity measures in the embedding space(eg. cosine similarity) we can easily find similar phrases/words given a phrase/word. The results as shown in Table 3 are qualitatively sensible for 3 different kinds of interactions: positive negation, negative negation and modification, as well as positive and negative words.

The paper provides an algorithm called Contextual Decomposition(CD) to interpret predictions made by LSTMs without modifying their architecture. It takes in a trained LSTM and breaks it down in components and quantifies the interpretability of its decision. In both NLP and in general applications CD produces importance scores for words (single variables in general), phrases (several variables together) and word interactions (variable interactions). It also compares the algorithm with state-of-the-art baselines and shows that it performs favorably. It also shows that CD is capable of identifying phrases of varying sentiment and extracting meaningful word (or variable) interactions. It shows the shortcomings of the traditional word-based interpretability approaches for understanding LSTMs and advances the state-of-the-art. 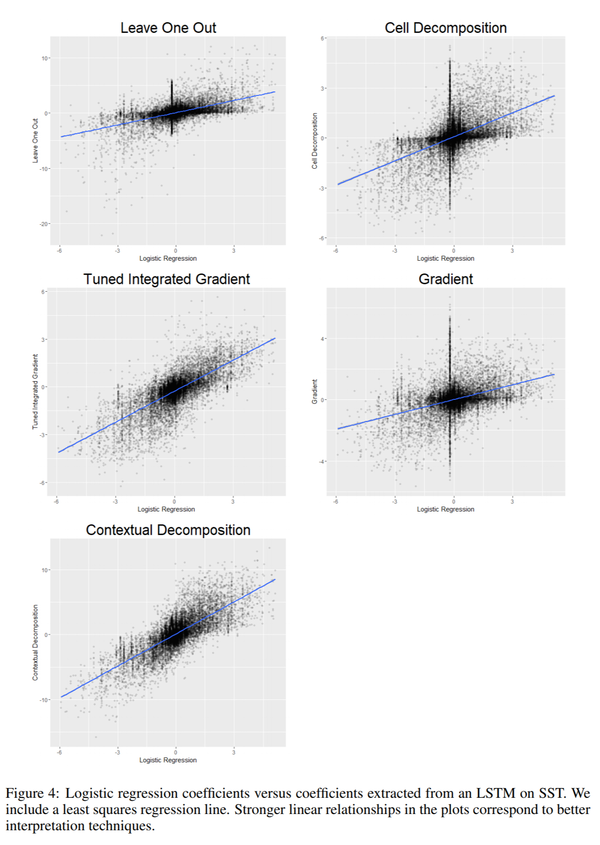 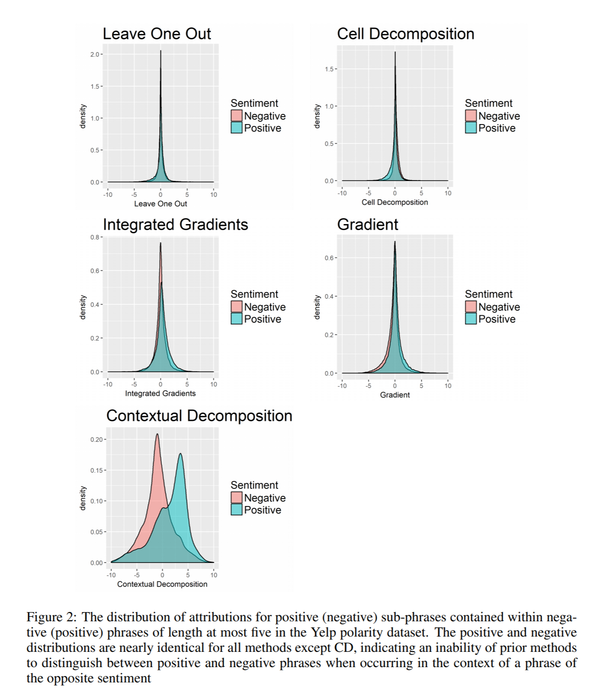 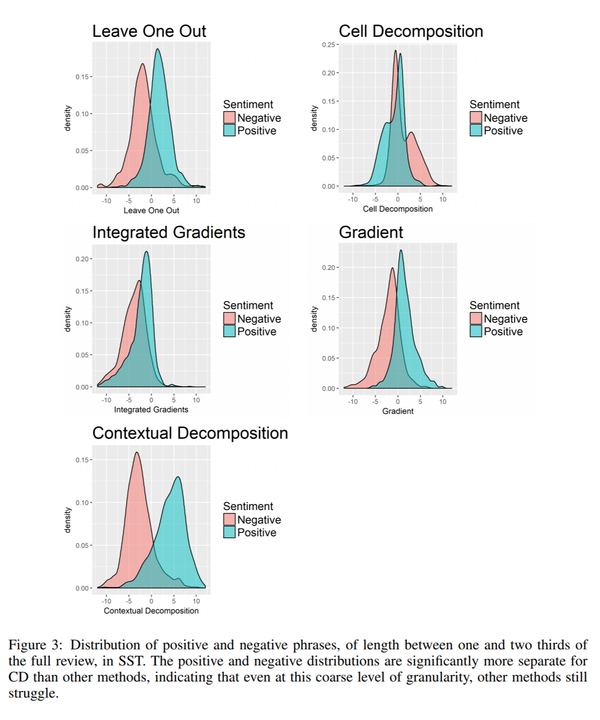 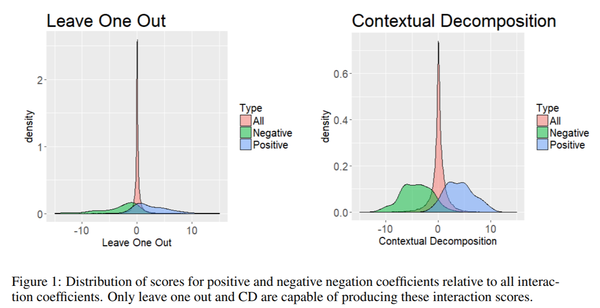