This paper focuses on time series that have multivariate and noisy signals, especially financial data. Financial time series is challenging to predict due to their low signal-to-noise ratio and heavy-tailed distributions. For example, the same signal (e.g. price of a stock) is obtained from different sources (e.g. financial news, an investment bank, financial analyst etc.) asynchronously. Each source may have a different bias or noise. (Figure 1) The investment bank with more clients can update their information more precisely than the investment bank with fewer clients, which means the significance of each past observations may depend on other factors that change in time. Therefore, the traditional econometric models such as AR, VAR (Vector Autoregressive Model), VARMA (Vector Autoregressive Moving Average Model) [1] might not be sufficient. However, their relatively good performance could allow us to combine such linear econometric models with deep neural networks that can learn highly nonlinear relationships. This model is inspired by the gating mechanism which is successful in RNNs and Highway Networks.

Thus, we focus on modeling the predictors of future values of time series given their past values.

The form of [math]\hat{y}_n[/math] ensures the separation of the temporal dependence (obtained in weights [math]W_m[/math]). [math]S[/math], which represents the local significance of observations, is determined by its filters which capture local dependencies and are independent of the relative position in time, and the predictors [math]\text{off}(x_{n-m})[/math] are completely independent of position in time. An adjusted single regressor for the target variable is provided by each past observation through the offset network. Since in asynchronous sampling procedure, consecutive values of x come from different signals and might be heterogeneous, therefore adjustment of offset network is important. In addition, significance network provides data-dependent weight for each regressor and sums them up in an autoregressive manner.

The paper evaluated SOCNN architecture on three datasets: artificially generated datasets, household electric power consumption dataset, and the financial dataset of bid/ask quotes sent by several market participants active in the credit derivatives market. Comparing its performance with simple CNN, single and multiplayer LSTM and 25-layer ResNet. Apart from the evaluation of the SOCNN architecture the paper also discusses the impact of network components such as auxiliary loss and the depth of the offset sub-network. The code and datasets are available here 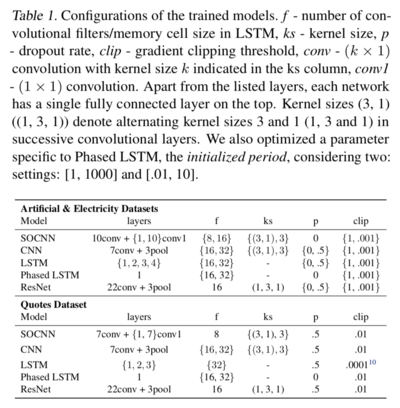