Time series forecasting is focused on modeling the predictors of future values of time series given their past. As in many cases the relationship between past and future observations is not deterministic, this amounts to expressing the conditional probability distribution as a function of the past observations: The time series forecasting problem can be expressed as a conditional probability distribution below,

This forecasting problem has been approached almost independently by econometrics and machine learning communities. In this paper, the authors focus on modeling the predictors of future values of time series given their past values.

Gating mechanism for neural networks has ability to overcome the problem of vanishing gradients, and can be expressed as [math]f(x)=c(x) \otimes \sigma(x)[/math], where [math]f[/math] is the output function, [math]c[/math] is a "candidate output" (a nonlinear function of [math]x[/math]), [math]\otimes[/math] is an element-wise matrix product, and [math]\sigma : \mathbb{R} \rightarrow [0,1] [/math] is a sigmoid non-linearity that controls the amount of output passed to the next layer. Different composition of functions of the same type as described above have proven to be an essential ingredient in popular recurrent architecture such as LSTM and GRU[11].

This idea is also successfully used in attention networks[13] such as image captioning and machine translation. In this paper, the proposed method is similar as, the separate inputs (time series steps in this case) are weighted in accordance with learned functions of these inputs. The difference is that the functions are modelled using multi-layer CNNs. Another difference is that the proposed method is not using recurrent layers, which enables the network to remember parts of the sentence/image already translated/described.

The paper evaluated SOCNN architecture on three datasets: artificially generated datasets, household electric power consumption dataset, and the financial dataset of bid/ask quotes provided by several market participants active in the credit derivatives market. Comparing its performance with simple CNN, single and multiplayer LSTM and 25-layer ResNet. Apart from the evaluation of the SOCNN architecture, the paper also discussed the impact of network components such as auxiliary loss and the depth of the offset sub-network. The code and datasets are available here.

Artificial data: They generated 4 artificial series, [math] X_{K \times N}[/math], where [math]K \in \{16,64\} [/math]. Therefore there is a synchronous and an asynchronous series for each K value. Note that a series with K sources is K + 1-dimensional in synchronous case and K + 2-dimensional in asynchronous case. The base series in all processes was a stationary AR(10) series. Although that series has the true order of 10, in the experimental setting the input data included past 60 observations. The rationale behind that is twofold: not only is the data observed in irregular random times but also in real–life problems the order of the model is unknown. 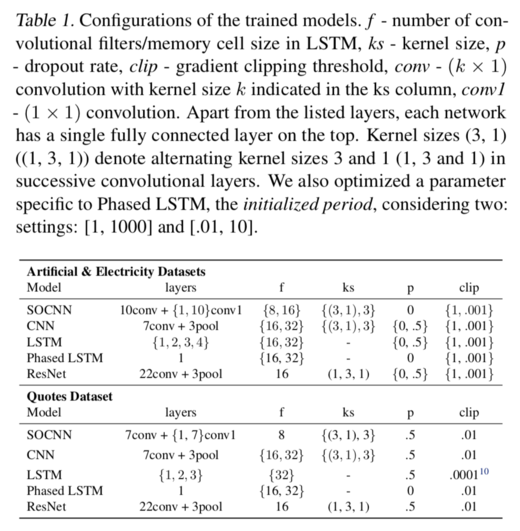 The authors carried out the experiments on Tensorflow and Keras and used different GPU to optimize the model for different datasets. The artificial and electricity data was optimized using one NVIDIA K20, while the quotes data used only an Intel Core i7-6700 CPU.

We can see that SOCNN outperforms in all asynchronous artificial, electricity and quotes datasets. For synchronous data, LSTM might be slightly better, but SOCNN almost has the same results with LSTM. Phased LSTM and ResNet have performed really bad on artificial asynchronous dataset and quotes dataset respectively. Notice that having more than one layer of offset network would have negative impact on results. Also, the higher weights of auxiliary loss([math]\alpha[/math]considerably improved the test error on asynchronous dataset, see Table 3. However, for other datasets, its impact was negligible. This makes it hard to justify the introduction of the auxillary loss function [math]L^{aux}[/math].

Also, using artificial dataset as experimental result is not a good practice in this paper. This is essentially an application paper, and such dataset makes results hard to reproduce, and cannot support the performance claim of the model.

From Figure 6, the purple lines and green lines seem to stay at the same position in training and testing process. SOCNN and single-layer LSTM are most robust and least prone to overfitting comparing to other networks.