Difference between revisions of "stat841f10"

Statistical classification, or simply known as classification, is an area of supervised learning that addresses the problem of how to systematically assign unlabeled (classes unknown) novel data to their labels (classes or groups or types) by using knowledge of their features (characteristics or attributes) that are obtained from observation and/or measurement. A classifier is a specific technique or method for performing classification. To classify new data, a classifier first uses labeled (classes are known) training data to train a model, and then it uses a function known as its classification rule to assign a label to each new data input after feeding the input's known feature values into the model to determine how much the input belongs to each class.

Classification has been an important task for people and society since the beginnings of history. According to this link, the earliest application of classification in human society was probably done by prehistory peoples for recognizing which wild animals were beneficial to people and which ones were harmful, and the earliest systematic use of classification was done by the famous Greek philosopher Aristotle (384 BC - 322 BC) when he, for example, grouped all living things into the two groups of plants and animals. Classification is generally regarded as one of four major areas of statistics, with the other three major areas being regression, clustering, and dimensionality reduction (feature extraction or manifold learning). Please be noted that some people consider classification to be a broad area that consists of both supervised and unsupervised methods of classifying data. In this view, as can be seen in this link, clustering is simply a special case of classification and it may be called unsupervised classification.

In classical statistics, classification techniques were developed to learn useful information using small data sets where there is usually not enough of data. When machine learning was developed after the application of computers to statistics, classification techniques were developed to work with very large data sets where there is usually too many data. A major challenge facing data mining using machine learning is how to efficiently find useful patterns in very large amounts of data. An interesting quote that describes this problem quite well is the following one made by the retired Yale University Librarian Rutherford D. Rogers, a link to a source of which can be found here.

In the Information Age, machine learning when it is combined with efficient classification techniques can be very useful for data mining using very large data sets. This is most useful when the structure of the data is not well understood but the data nevertheless exhibit strong statistical regularity. Areas in which machine learning and classification have been successfully used together include search and recommendation (e.g. Google, Amazon), automatic speech recognition and speaker verification, medical diagnosis, analysis of gene expression, drug discovery etc.

The formal mathematical definition of classification is as follows:

As an example, if we would like to classify some vegetables and fruits, then our training data might look something like the one shown in the following picture from Professor Ali Ghodsi's Fall 2010 STAT 841 slides. 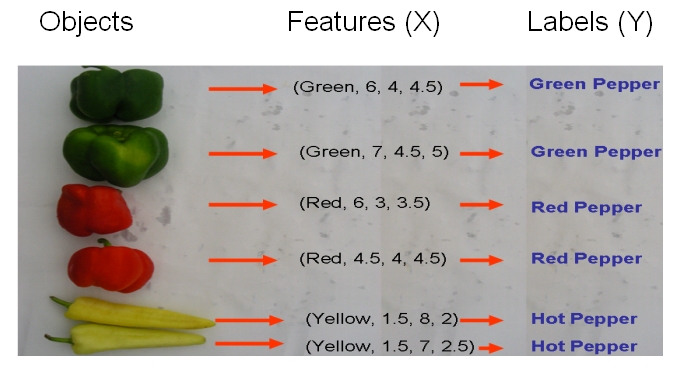 After we have selected a classifier and then built our model using our training data, we could use the classifier's classification rule [math]\ h [/math] to classify any newly-given vegetable or fruit such as the one shown in the following picture from Professor Ali Ghodsi's Fall 2010 STAT 841 slides after first obtaining its feature values.

• Steering an autonomous car across the US (turn left, right, or go straight).

• Medical diagnosis (classification of disease based on observed symptoms).

Suppose that we have training data X which contains N data points. The Independent and Identically Distributed (IID) assumption declares that the datapoints are drawn independently from identical distributions. This assumption implies that ordering of the data points does not matter, and the assumption is used in many classification problems. For an example of data that is not IID, consider daily temperature: today's temperature is not independent of the yesterday's temperature -- rather, there is a strong correlation between the temperatures of the two days.

The true error rate [math]\,L(h)[/math] of a classifier having classification rule [math]\,h[/math] is defined as the probability that [math]\,h[/math] does not correctly classify any new data input, i.e., it is defined as [math]\,L(h)=P(h(X) \neq Y)[/math]. Here, [math]\,X \in \mathcal{X}[/math] and [math]\,Y \in \mathcal{Y}[/math] are the known feature values and the true class of that input, respectively.

we can identify three distinct approaches to solving decision problems, all of which have been used in practical applications. These are given, in decreasing order of complexity, by:

a. First solve the inference problem of determining the class-conditional densities [math]\ p(x|C_k)[/math] for each class [math]\ C_k[/math] individually. Also separately infer the prior class probabilities [math]\ p(C_k)[/math]. Then use Bayes’ theorem in the form

to find the posterior class probabilities [math]\ p(C_k|x)[/math]. As usual, the denominator in Bayes’ theorem can be found in terms of the quantities appearing in the numerator, because

Equivalently, we can model the joint distribution [math]\ p(x, C_k)[/math] directly and then normalize to obtain the posterior probabilities. Having found the posterior probabilities, we use decision theory to determine class membership for each new input [math]\ x[/math]. Approaches that explicitly or implicitly model the distribution of inputs as well as outputs are known as "generative models", because by sampling from them it is possible to generate synthetic data points in the input space.

b. First solve the inference problem of determining the posterior class probabilities [math]\ p(C_k|x)[/math], and then subsequently use decision theory to assign each new [math]\ x[/math] to one of the classes. Approaches that model the posterior probabilities directly are called "discriminative models".

This topic has brought to you from Pattern Recognition and Machine Learning by Christopher M. Bishop (Chapter 1)

A Bayes classifier is a simple probabilistic classifier based on applying Bayes' Theorem (from Bayesian statistics) with strong (naive) independence assumptions. A more descriptive term for the underlying probability model would be "independent feature model".

In simple terms, a Bayes classifier assumes that the presence (or absence) of a particular feature of a class is unrelated to the presence (or absence) of any other feature. For example, a fruit may be considered to be an apple if it is red, round, and about 4" in diameter. Even if these features depend on each other or upon the existence of the other features, a Bayes classifier considers all of these properties to independently contribute to the probability that this fruit is an apple.

Depending on the precise nature of the probability model, naive Bayes classifiers can be trained very efficiently in a supervised learning setting. In many practical applications, parameter estimation for Bayes models uses the method of maximum likelihood; in other words, one can work with the naive Bayes model without believing in Bayesian probability or using any Bayesian methods.

Suppose there are [math]\,k[/math] classes and we are given a new data input having feature values [math]\,x[/math]. The following derivation shows how the Bayes classifier finds the input's posterior probability [math]\,P(Y = y|X = x)[/math] of belonging to each class [math] y \in \mathcal{Y} [/math].

In the special case where there are two classes, i.e., [math]\, \mathcal{Y}=\{0, 1\}[/math], the Bayes classifier makes use of the function [math]\,r(x)=P\{Y=1|X=x\}[/math] which is the posterior probability of a new data input having feature values [math]\,x[/math] belonging to the class [math]\,Y = 1[/math]. Following the above derivation for the posterior probabilities of a new data input, the Bayes classifier calculates [math]\,r(x)[/math] as follows:

Although the Bayes classifier is optimal in the theoretical sense, other classifiers may nevertheless outperform it in practice. The reason for this is that various components which make up the Bayes classifier's model, such as the likelihood and prior probabilities, must either be estimated using training data or be guessed with a certain degree of belief. As a result, the estimated values of the components in the trained model may deviate quite a bit from their true population values, and this can ultimately cause the calculated posterior probabilities of inputs to deviate quite a bit from their true values. Estimation of all these probability functions, as likelihood, prior probability, and evidence function is a very expensive task, computationally, which also makes some other classifiers more favorable than Bayes classifier.

A detailed proof of this theorem is available here.

In the special case of two classes, the Bayes classifier can use three main approaches to define its classification rule [math]\,h^*[/math]:

Typically, the Bayes classifier uses approach 3 to define its classification rule. These three approaches can easily be generalized to the case where the number of classes exceeds two.

In the above discussion, we introduced the Bayes formula for this general case:

which can re-worded as:

In the general case where there are at least two classes, the Bayes classifier uses the following theorem to assign any new data input having feature values [math]\,x[/math] into one of the [math]\,k[/math] classes.

These known data are summarized in the following tables:

The simper form of the likelihood function seen in the naive Bayes is:

In contrast to the Bayesian view of probability, the frequentist view of probability holds that there is an intrinsic probability of occurrence associated with every event to which one can carry out many, if not an infinite number, of well-defined independent random trials. In each trial for an event, the event either occurs or it does not occur. Suppose [math]n_x[/math] denotes the number of times that an event occurs during its trials and [math]n_t[/math