There are several issues on BP learning algorithms:

(4) Gradient-based learning is very time-consuming in most applications.

Due to the simplicity of their implementations, least square support vector machine (LS-SVM) and proximal support vector machine (PSVM) have been widely used in binary classification applications. The conventional LS-SVM and PSVM cannot be used in regression and multiclass classification applications directly, although variants of LS-SVM and PSVM have been proposed to handle such cases. This paper shows that both LS-SVM and PSVM can be simplified further and a unified learning framework of LS-SVM, PSVM, and other regularization algorithms referred to extreme learning machine (ELM) can be built.

As the training of SVMs involves a quadratic programming problem, the computational complexity of SVM training al- gorithms is usually intensive, which is at least quadratic with respect to the number of training examples

Least square SVM (LS-SVM) [2] and proximal SVM (PSVM) [3] provide fast implementations of the traditional SVM. Both LS-SVM and PSVM use equality optimization constraints instead of inequalities from the traditional SVM, which results in a direct least square solution by avoiding quadratic programming.

extreme learning machine (ELM) for single hidden layer feedforward neural networks (SLFNs) which randomly chooses the input weights and analytically determines the output weights of SLFNs. In theory, this algorithm tends to provide the best generalization performance at extremely fast learning speed. The experimental results based on real world benchmarking function approximation and classification problems including large complex applications show that the new algorithm can produce best generalization performance in some cases and can learn much faster than traditional popular learning algorithms for feedforward neural networks. 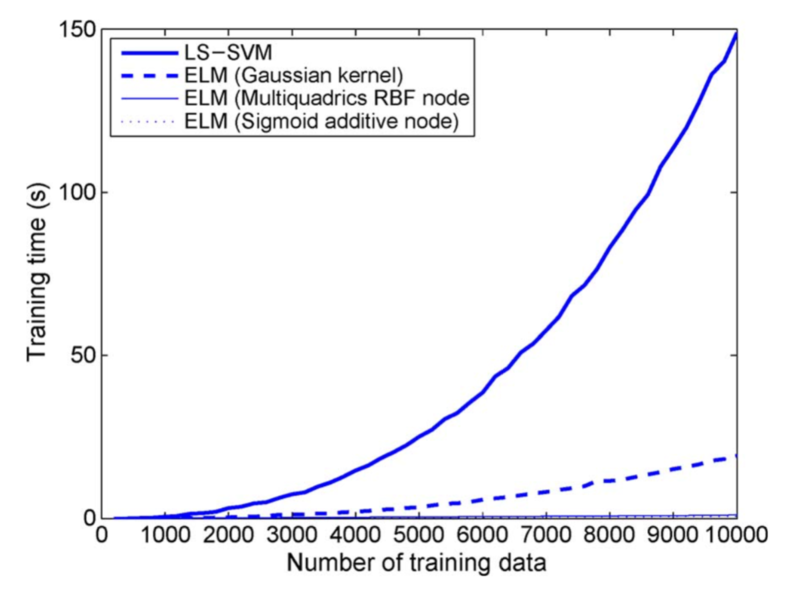