The author has acknowledged that at the time of his original experiments he did not have access to a GPU and thus could not run many differing experiments. Therefore the paper is missing things like ablation studies, which refers to removing/adding some feature of the model/algorithm and seeing how that can affect performance of the CNN (e.g. dropout rate). When a model is assessed it would be vital for the author to replicate the k-fold cross validation procedure and include ranges and variances of the performance. The author only reported the mean of the CV results but this overlooks the randomness of the stochastic processes which were used. This paper did not report variances despite using stochastic gradient descent, random dropout and random weight parameter initialization, which are all highly stochastic learning procedures. For more on an exhaustive analysis of model variants on CNNs Ye Zhang did a sensitivity analysis of CNNs for sentence classification (https://arxiv.org/pdf/1510.03820.pdf). 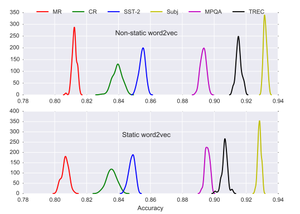