The You Only Look Once (YOLO) object detection model is a one-shot object detection network aimed to combine suitable accuracy with extreme performance. Unlike other popular approaches to object detection such as sliding window DPM [1] or regional proposal models such as the R-CNN variants [2][3][4], YOLO does not comprise of a multi-step pipeline which can become difficult to optimize. Instead it frames object detection as a single regression problem, and uses a single convolutional neural network to predict bounding boxes and class probabilities for each box.

Some of the cited benefits of the YOLO model are:

Perhaps the most important part of the YOLO model is its novel approach to prediction encoding.

The input image is first divided into an [math]S \times S[/math] grid of cells. Now for the given bounding boxes of objects in the input image, the YOLO model takes the central point of the bounding box and links it to the grid cell in which it is contained. This cell will be responsible for the detection of that object.

Now for each grid cell, YOLO predicts [math]B[/math] bounding boxes along with confidence scores. These bounding boxes are predicted directly with fully connected layers at the end of the single neural network, as seen later in the network architecture. Each bounding box is comprised of 5 predictions:

Here IOU is the intersection over union, also called the Jaccard index[5]. It is an evaluation metric that rewards bounding boxes which significantly overlap with the ground-truth bounding boxes of labelled objects in the input.

The network is structured quite conventionally, with convolutional and max pooling layers to perform feature extraction, along with some convolutional layers and 2 fully connected layers at the end which predict the bounding boxes along with class probabilities.

A linear activation function is used for the final layer which predicts class probabilities and bounding boxes, while a leaky ReLu defined as follows is used for all other layers:

Layers for feature extraction and detection

The author elects to pretrain the first 20 convolutional layers followed by an average-pooling layer and a fully connected layer with a large dataset, which in the paper's case was ImageNet's 1000-class competition dataset [6]. Afterwards, 4 convolutional layers and two fully connected layers with randomly initialized weights are used to perform detection, as shown to be beneficial in Ren et al[6].

The entire loss function which YOLO optimizes for is defined as follows:

This loss function appears quite complex, and may be easier to understand in parts.

The sum-of-squared error is used here as well, with a slight adjustment - taking square roots of each coordinate. This is done to ensure that the error metric properly manages scales of deviations. That is, small deviations in large boxes should be of less significance than small deviations in small boxes. The author claims that predicting the square root of the bounding box dimensions partially addresses this issue.

This is the loss associated with the confidence score for each bounding box predictor, again using sum-of-squared error.

This is synonymous with the regular sum-of-squared error for classification, however we included the indicator [math]\mathbf{1}_{i}^{\text{obj}}[/math] to ensure that classification error is not penalized for cells which do not contain objects.

Naive sum-of-squared error would weigh localization error equally to classification error. This is not a desirable property, as it can shift the confidence of many grid cells which do not contain objects towards zero and "overpower" the gradients for grid cells containing objects. This would lead to model instability, and this problem can be alleviated by modifying the weighting of localization error relative to classification error with the [math]\lambda[/math] parameters described above.

What is unique about this loss function?

YOLO was compared to other real-time detection systems on the PASCAL VOC detection dataset[8] from 2007 and 2012.

Here DPM is the deformable parts model, which as previously mentioned uses a sliding window approach for detection. The single convolutional network employed by YOLO leads to both a faster and more accurate model, as seen in the results.

Here YOLO VGG-16 is the same YOLO model, except trained with VGG-16. It is correspondingly much more accurate yet slower than the network discussed previously.

One can see that YOLO struggles with small objects due to localization error being the primary problem of the model design, with lower scores in categories such as "sheep", "bottle", and "tv". We can also see that YOLO is not competitive in terms of mAP compared to state of the art models, however these results are not measuring FPS (or speed) in which YOLO excels. 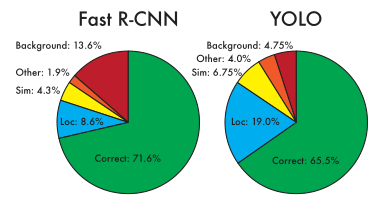 In this experiment, the methodology of Hoiem et al. [12] was used to investigate the error characteristics of YOLO compared to R-CNN. Here the areas on the pie chart can be interpreted as follows:

We can see that YOLO indeed makes relatively less background errors than R-CNN, due to its usage of global context. Also as described earlier, localization error has a severe uptick in YOLO and is the primary issue with the model design.

The YOLO model was introduced in this paper, which presents a novel prediction encoding that allows training and prediction to be unified under a single neural network architecture. YOLO proves in experimental results to be an extremely fast object detector, which may provide suitable accuracy depending on the object detection task at hand.