This paper introduces an attention based model that automatically learns to describe the content of images. It is able to focus on salient parts of the image while generating the corresponding word in the output sentence. A visualization is provided showing which part of the image was attended to to generate each specific word in the output. This can be used to get a sense of what is going on in the model and is especially useful for understanding the kinds of mistakes it makes. The model is tested on three datasets, Flickr8k, Flickr30k, and MS COCO. 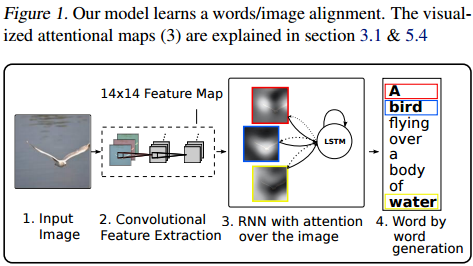 Model takes in a single image and generates a caption of arbitrary length. The caption is a sequence of one-hot encoded words from a given vocabulary.

Results reported with the BLEU and METEOR metrics.