The agent should imitate the demonstrated behavior when rewards are sparse and then explores new states on its own after acquiring sufficient skills, which is a dynamic intrinsic reward mechanism that can be reshape in terms of the native rewards in RL. At present the state of the art exploration in Reinforcement learning is simply epsilon greedy which just makes random moves for a small percentage of times to explore unexplored moves. This is very naive and is one of the main reasons for the high sample complexity in RL. On the other hand if there is a expert demonstrator who can guide exploration, the agent can make more guided and accurate exploratory moves.

There are some relates works in overcoming exploration difficulties by learning from demonstration [6] and imitation learning in RL.

All of the above methods are effective for imitation learning, but they usually suffer the bad performance when the expert data is imperfect. That is different from POfD in this paper. 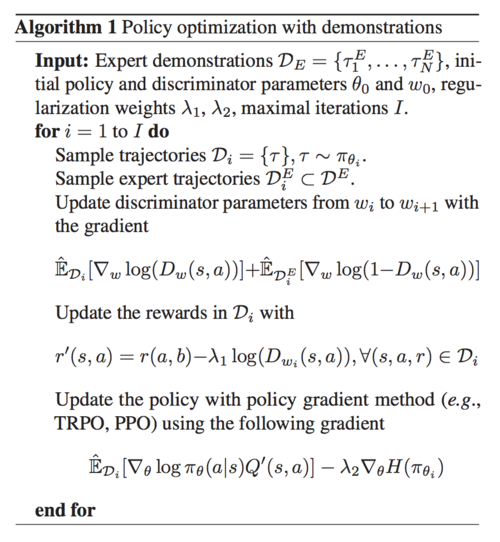 A method that can acquire knowledge from a limited amount of imperfect demonstration data to aid exploration in environments with sparse feedback is proposed, that is POfD. It is compatible with any policy gradient methods. POfD induces implicit dynamic reward shaping and brings provable benefits for policy improvement. Moreover, the experiments results have shown the validity and effectivity of POfD in encouraging the agent to explore around the nearby region of the expert policy and learning better policies. The key contribution is that POfD helps the agent work with few and imperfect demonstrations in an environment with sparse rewards.