This research shows that training a convolutional network that simultaneously classifies, locates and detects objects in images can boost the classification, detection and localization accuracy of all tasks. The paper proposes a new integrated approach to object detection, recognition, and localization with a single ConvNet. A novel method for localization and detection by accumulating predicted bounding boxes is also introduced. We suggest that by combining many localization predictions, detection can be performed without training on background samples and that it is possible to avoid the time-consuming and complicated bootstrapping training passes. Not training on the background also lets the network focus solely on positive classes for higher accuracy.

This research explores three computer vision tasks in increasing order of difficulty:
(i) classification, (ii) localization, and (iii) detection.
In the classification task, each image is assigned a single label corresponding to the main object in the image. Five guesses are allowed to find the correct answer (because images can also contain multiple unlabeled objects). For the localization task, in addition to classifying five objects in the image, a bounding box for each classified object is returned. The predicted box must match the groundtruth by at least 50% (using the PASCAL criterion of union over intersection), as well as be labeled with the correct class. Images from 2013 ImageNet Large Scale Visual Recognition Challenge (ILSVRC2013) is used for this research. The detection task differs from localization in that there can be any number of objects in each image (including zero), and false positives are penalized by the mean average precision measure (mAP). Figure 1 illustrates the higher difficulty of the detection process. 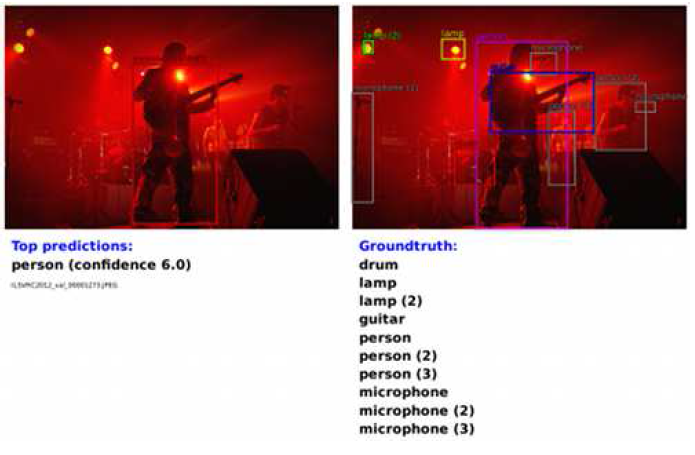 This researched presented a multi-scale, sliding window approach that can be used for classification, localization, and detection. This method currently ranks 4th in classification, 1st in localization and 1st in detection at 2013 ILSVRC competition, which proves that ConvNets can be effectively used for detection and localization tasks. The scheme proved here involves substantial modifications to networks designed for classification, but clearly demonstrate that ConvNets are capable of these more challenging tasks. This localization approach won the 2013 ILSVRC competition and significantly outperformed all 2012 and 2013 approaches. The detection model was among the top performers during the competition and ranks first in post-competition results. This research presented an integrated pipeline that can perform different tasks while sharing a common feature extraction base, entirely learned directly from the pixels.