Neural Networks suffer from catastrophic forgetting: forgetting previously learned tasks when trained to do new ones. Most neural networks can’t learn tasks sequentially despite having the capacity to learn them simultaneously. For example, training a CNN to look at only one label of CIFAR10 at a time results in poor performance for the initially trained labels (catastrophic forgetting). But that same CNN will perform really well if all the labels are trained simultaneously (as is standard). The ability to learn tasks sequentially is called continual learning, and it is crucially important for real world applications of machine learning. For example, a medical imaging classifier might be able to classify a set of base diseases very well, but its utility is limited if it cannot be adapted to learn novel diseases - like local/rare/or new diseases (like Covid-19).

In permuted MNIST [1], there are five tasks, where each task is a fixed permutation that gets applied to each MNIST digit. The following tables show classification performance for each task after sequentially training on all the tasks. Thus, if solved catastrophic forgetting has been solved, the accuracies should be constant across tasks. If not, then there should be a significant decrease from task 5 through to task 1.

Rotated MNIST is similar except instead of fixed permutation there are fixed rotations. There are five sequential tasks, with MNIST images rotated at 0, 10, 20, 30, and 40 degrees in each task.

Also, the below table corresponds to the performance of Rotated MNIST and Permuted MNIST as a function of number of gradients stored. 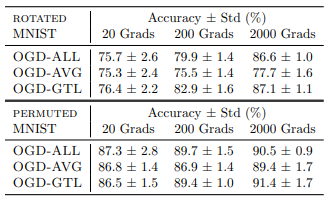 The authors proposed an interesting idea for mitigating catastrophic forgetting likely to happen in the online learning setting. Although Orthogonal Gradient Descent achieves state-of-the-art results in practice for continual learning, they have not provided a theoretical guarantee. [] have derived the first generalization guarantees for the algorithm OGD for continual learning, for overparameterized neural networks. [] also showed that OGD is only robust to catastrophic forgetting across a single task while for the arbitrary number of tasks they have proposed OGD+.