Even though recurrent neural networks (RNNs) are Turing complete in theory, the control of logical flow and usage of external memory have been largely ignored in the machine learning literature. This might be due to the fact that the RNNs have to be wired properly to achieve the Turing completeness and this is not necessarily easy to achieve in practice. By adding an addressable memory, Graves et al. try to overcome this limitation and name their approach Neural Turing Machine (NTM) as analogy to Turing machines that are finite-state machines extended with an infinite memory<ref name="main">Graves, A., Wayne, G., & Danihelka, I. (2014). Neural Turing Machines. arXiv preprint arXiv:1410.5401.</ref>. Furthermore, every component of an NTM is differentiable, implying each component can be learned.

The authors state that the design of the NTM is inspired by past research spanning the disciplines of neuroscience, psychology, cognitive science and linguistics, and that the NTM can be thought of as a working memory system of the sort described in various accounts of cognitive architecture. However, the authors propose to ignore the known capacity limitations of working memory, and to introduce sophisticated gating and memory addressing operations that are typically absent in models of the sort developed throughout the computational neuroscience literature.

With respect to historical precedents in cognitive science and linguistics literature, the authors relate their work to a longstanding debate concerning the effectiveness of neural networks for cognitive modeling. They present their work as advancing a line of research on encoding recursively-structured representations in neural networks that stemmed out of criticisms presented by Fodor and Pylyshyn in 1988 <ref name=fodor>Fodor, J. A., & Pylyshyn, Z. W. (1988). Connectionism and cognitive architecture: A critical analysis. Cognition, 28(1), 3-71.</ref> (though it is worth pointing out the authors give an incorrect summary of these criticisms - they state that Fodor and Pylyshyn argued that neural networks could not implement variable binding or perform tasks involving variable length structures, when in fact they argued that successful models of cognition require representations with constituent structure and processing mechanisms that strictly structure sensitive - see <ref name=fodor></ref> for details). The NTM is able to deal variable length inputs and arguably performs variable binding in the sense that the memory slots in the NTM can be treated as variables to which data is bound, but the authors do not revisit these issues in any detail after presenting the results of their simulations with the NTM. 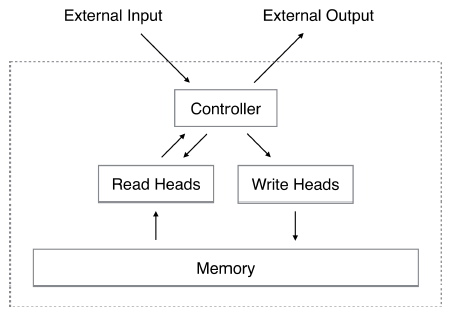