Neighbourhood Components Analysis (NCA) is a method for learning a Mahalnobis distance measure for k-nearest neighbours (KNN). In particular, it finds a distance metric that maximises the leave one out (LOO) error on the training set for a stochastic variant of KNN. NCA can also learn a low-dimensional linear embedding of labelled data for data visualisation and for improved KNN classification speed. Unlike other methods, this classification model is non-parametric without any assumption on the shape of the class distributions or the boundaries between them.

k-Nearest neighbors is a simple classification technique that determines a test point's label by looking at the labels of the [math]\,k[/math] training points that are nearest the test point. This is a surprisingly effective method that has a non-linear decision surface that is non-parametric, except for the parameter [math]\,k[/math].

However, KNN suffers from two problems. First, it can be computationally expensive to classify points as they must be stored and compared over the entire training set. There is also the problem of determining which distance metric is to be used to define "nearest" points.

NCA attacks the above two problems of KNN. It finds a quadratic distance metric that defines which points are nearest. It can restrict this distance metric to be low rank, reducing the dimensionality of the data and thus reducing storage and search times.


Starting with a labeled dataset [math]\,x_1, x_2, ..., x_n \in R^D[/math] and corresponding class labels [math]\,\!c_1, c_2, ..., c_n[/math], we are looking for a distance metric that maximizes the performance of nearest neighbor classification. As we do not knw the actual future data, optimizing Leave-one-out performance on the training data can be substituted.

The basic idea of NCA is to find the distance metric [math]\,A[/math] that maximizes the KNN classification on test data. As test data is not available during training, the method uses Leave One Out (LOO) performance. However, KNN has a discontinuous error function as points can suddenly jump class as they cross class boundaries. Instead, NCA optimises using stochastic neighbour assignment. Here, a test point is assigned a neighbour (and the neighbour's class) according to probability [math]\,p_{ij}[/math]. This probability decreases as the distance between points increases: [math]\, p_{ij} = \frac{exp(-\parallel Ax_i - Ax_j \parallel ^2)}{\sum_{k \neq i}exp(-\parallel Ax_i - Ax_k \parallel ^2)} [/math] , [math]\,\textstyle p_{ii} = 0[/math].

This stochastic selection rule helps us find the probability [math]\,p_i[/math] that point [math]\,i[/math] will be correctly classified:
[math]\,p_i = \sum_{j\in c_i} p_{ij}[/math] where [math]\,c_i=\{j|c_i=c_j\}[/math]
NCA maximises the expected number of correctly classified points according to this objective function:

The gradient for which is easily found:

NCA then finds A using a gradient-based optimizer. Note, however, that the cost function is not convex, so the optimization must handle local minima. The authors comment that they never observed any effects of over fitting in this method, and that performance never decreased as the training set size increased.

The scale of [math]\,A[/math] found by NCA, and relative row directions can provide an estimate to the optimal number of neighbours to use for KNN. In Stochastic NN, a larger scale A tends to consult average over fewer neighbours, and vice versa.

A short note on Kullback-Leibler divergence

It can be shown that KL divergence is non-negative (Gibb's inequality), with KL divergence equals zero if and only if [math]\,P=Q \,[/math].

NCA allows for linear dimensionality reduction of the input data. This provides computational advantages and is relatively immune to over fitting.

During the optimization procedure in NCA, the matrix [math]\,A[/math] can be restricted to size [math]\,d \times D[/math], where [math]\,d \lt D[/math]. This forces the learned metric to be low rank, and maps all inputs to [math]\,\mathbb{R}^d[/math].

If [math]\,d \ll D[/math], the storage and search times for KNN will be much lower. Storage can be reduced from [math]\,O(DN)[/math] to [math]\,O(dN) + dD[/math] by storing the training set in the lower-dimensional projection. If [math]\,d[/math] is 2 or 3, then projected points can be easily plotted for data visualization.

The NCA method remains the same as before, optimize the above cost function with respect to [math]\,A[/math], however now [math]\,A[/math] is non-square. Note that NCA itself does not provide suggestions on the optimal size of [math]\,d[/math].

The NCA method was evaluated against the other Mahalanobis measures for KNN distance metrics. Among the six data sets that were used, 5 were from the UCI repository one was a generated data set. In the test, NCA method consistently performed better on training data, and test data performance was always at or near the top as shown in the figures below. The figures below show that the training(on left) and testing performance of NCA (on right) is consistently the same as or better than that of other Mahalanobis distance measures for KNN, despite the relative simplicity of the NCA objective function and the fact that the distance metric being learned is nothing more than a positive definite matrix [math]\,A^T A[/math].The data sets used from UCI repository included balance, ionosphere, iris, wine and housing and on the USPS handwritten digits. Results are the averages over 40 realizations of splitting each dataset into training (70%) and testing (30%) subsets (for USPS 200 images for each of the 10 digit classes were used for training and 500 for testing). Top panels show distance metric learning (square A) and the bottom panels show linear dimensionality reduction down to d = 2.

The Figures below show comparison of PCA, LDA, and NCA applied to "concentric ring", "wine", "faces", and "digits" data sets. The output show the reduced dimensionality of d= 2 3 from their original dimensionality which was D = 3 for concentric rings, D = 13 for wine, D = 560 for faces, and D = 256 for digits. Note that NCA produced better 2D projections of the data. Using these 2D projections for classification, NCA performed better consistently for both training and test data. When a two-dimensional projection is used, the classes are consistently much better separated by the NCA transformation than by either PCA, or LDA.

No timing data was provided by the authors.

It is also possible to adapt the method to support real-valued, continuous class labeling/targets. Using the above objective function and gradients, define the set [math]\,C_i[/math] to be a set of "correct matches", that is points with similar class labels to [math]\,i[/math]. The objective function is a weighted sum of points, based on similarity of classes. This allows semi-supervised learning, as target classes need to be explicitly specified, just similarity.

The authors illustrate this by choosing two faces at random from the FERET-B dataset (a repository of 5000 isolated faces that have a standard orientation and scale). The first face was rotated by an angle uniformly distributed between [math]\,\pm 45^{\circ}[/math] and scaled to have a height uniformly distributed between 25 and 35 pixels. The second face (which was of a different person) is given the same rotation and scaling but with Gaussian noise of [math]\,\pm 1.22^{\circ}[/math] and [math]\pm 1.5[/math] pixels. The pair is given a weight, [math]w_{ab}[/math], which is the probability density of the added noise divided by its maximum possible value. Then they trained a neural network with one hidden layer of 100 logistic units to map from the [math]35 \times 35[/math] pixel intensities of a face to a point, [math]y[/math], in a 2-D output space. Backpropagation was used to minimize the cost function where c and d are indices over all of the faces, not just the ones that form a pair.

This encouraged the faces in a pair to be placed close together. The four example faces shown below; horizontally the pairs agree and vertically they do not. 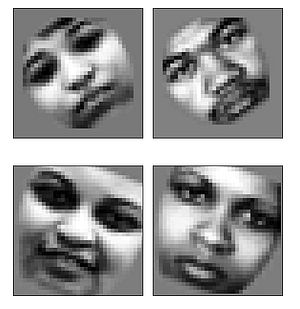 The figures below show the two dimensional outputs of the neural network on a set of test cases. The feedforward neural network discovered polar coordinates without the user having to decide how to represent scale and orientation in the output space.

Relationship to Other Methods

Here are other Mahalanobis distance metric learning methods for labelled data. Relevant component analysis (RCA) finds a distance metric, but assumes the classes have Gaussian distributions whereas NCA makes no assumption about class distribution. Xing et al's method finds a transformation that minimises the pairwise distances between points of the same class. This assumes that all points of the one class form a single, compact and connected set. Lowe's method is very similar to NCA, but further constrains the distance metric to be diagonal.

For low rank, linear transformation of data, LDA will be optimal if the classes are Gaussian with common covariance. This is not going to be true in general. LDA also has difficulties with mathematical instability when the training set is small, but the dimensionality of the training data is high. There are newer variants of LDA that improve this instability, and also improve robustness to outliers.