A simple and effective technique for learning in neural networks is introduced in the current paper. The main technique entails a modification to the vanilla backpropagation algorithm. The idea is that after a forward pass has been carried out in the usual fashion, we retain only a subset of the full gradient for computation of model parameters. More precisely, a simple quantization technique is employed to sparsify the gradient vectors, viz., the entries of the first gradient in a backpropagation step are set to zero unless they reach a specified size threshold. The rest of the gradients (the ones with respect to the weights and biases of the neural network) are computed using the chain rule in the typical way using the sparsified gradient obtained from the top layer. Since only a small subset of the weight matrix is modified, we obtain a linear reduction in the computational cost. The experimental results presented in the paper suggest that accuracy is improved rather than being degraded. The name given to the proposed technique is minimal effort back propagation method (meProp).

The backpropagation step in neural network training entails high computational cost since each iteration requires calculation of full gradient vectors and matrices and subsequent update of all model parameters. The main idea of the paper is to find only a small but critical subset of the gradient information and in each learning step, update only this minimal subset of the parameters. This leads to sparsified gradients because only highly relevant parameters are updated and rest remain untouched. Fig. 1 shows an abstract view of the proposed approach.

1) In the process of stochastic learning how do we find a highly relevant subset of parameters from the current sample?

One solution to this question is given by Top-$k$ search method to identify the most important parameters. Experimental results suggest that if we use this technique, then we can only update 1–4% of the weights at each back propagation pass and this does not result in a larger number of training iterations.

2) Does this process of selecting a small subset of model parameters hurt accuracy? 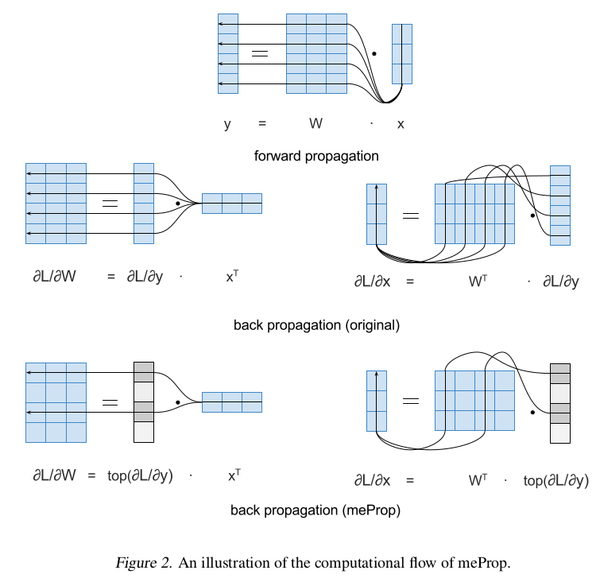 POS-Tag: Part-of-speech tagging is the process of identifying and assigning the parts of speech such as noun,verb, adjectice etc. in a corpus Baseline model: LSTM. Benchmark dataset: Penn Treebank Corpus. For training and testing: Wall Street Journal.

The code for the paper can be found on Github : https://github.com/jklj077/meProp

The graphs shown in Fig. 4 depict that meProp addresses the problem of overfitting and it provides better accuracy if the top-k weights are selected instead of random weights. Also, it was inferred that meProp can achieve further improvements over dropout for reducing overfitting and a model should take advantage of both meProp and dropout to reduce overfitting. Adding hidden layers does not hurt the performance of the model. Although this may be the case for the current set of test cases, a better understanding of the variation of hidden layer size and choice-of-k can be obtained by varying k with different hidden unit sizes [math]h[/math] by keeping [math]k*h[/math] or a similarly related term constant. This is better studied in [5] where the authors kept [math]p*n[/math] constant to obtain greater reductions in training error for smaller p values ( p being the dropout coefficient. Low p, more units dropped). The relevant numerical results have been shown in table 1-5.

The large consistent sparse matrix can be converted into a dense small matrix by simply removing the zero values. The authors refer to this method as the simplified unified top-$k$ method. The results are presented in Table 6. 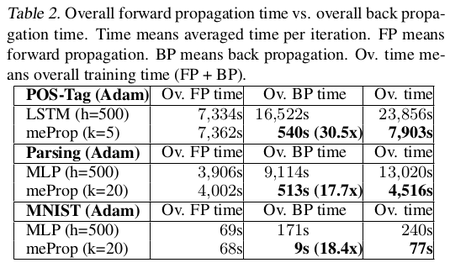 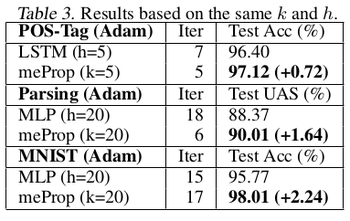 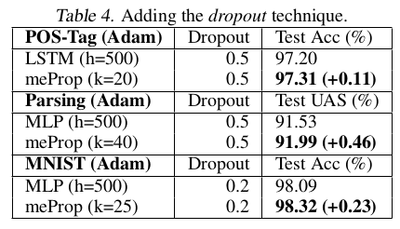 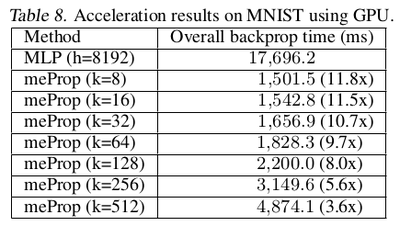 There has been no mention by the authors on the loss ( significant loss or the insignificance) of using meProp on tasks where preservation of temporal information and contextual data is important. For example, in tasks like using RNNs for Question-Answering tasks, memory of details of earlier regions of the paragraph could be garbled due to non-updation of the weights not belonging to the top-k set in backpropagation. Indeed, the lack of principled methods for sparsification is a major issue in this case since tasks such as machine translation often entail data where certain parts of an input are much more predictive than other parts in a systematic way. There could be a trade-off between knowledge preservation and choice of the hyperparameter k which can be verified by further analysis like correlation/covariance studies.