Assume Y is an [math]n \times m[/math] matrix containing n user preferences about m movies, such that [math]y_{ij} = +1[/math] if user i likes movie j, and [math]y_{ij} = -1[/math] if he/she dislikes it. Due to the lack of knowledge about the user's opinions, Y is partially observable: it has some [math]\pm1[/math] while some other cells are unknown. The main goal is to find matrix X such than it preserves the knowledge in Y, and predicts the value of its unknown cells.

If Y has been fully observed and there is no unknown, our goal is to find X as a simple (low-rank) representation of Y. By choosing the sum-squared error loss function, one can easily use SVD technique to minimize the loss and find X. Despite the fact that this solution is suitable for lowering the rank, it does not work when we have unknowns in Y (due to several local minimas problem). In addition one may think about other loss functions instead of SSE (although SSE is convex and has a nice behavior in the optimization problems). For example, in this problem Hinge loss works fine, specially considering the fact that values in Y are restricted to [math]\pm1[/math]. Here hinge loss is defined as:

Another way to tackle this problem is to use Matrix Factorization. In matrix factorization one tries to find a prediction [math]X = UV^T[/math] such that the rank of each factor (U and V) is low. In addition to this U and V are meaningful in this problem; the ith row of U is an indicator of the importance (weights) of the features for ith user, therefore ith row of V is the characterization of the ith movie based on its features. Here, lowering the rank of X is equal to lowering the rank of its factors, but unfortunately the main problem in this case is that, rank optimization problem is not convex.

A short discussion on Loss Function for classification

Collaborative prediction, as described in the problem definition, involves classifying each entry of a matrix into either 1 or -1. Consider the notation in the last paragraph and suppose that we are to predict the jth row of the matrix X. Suppose further that the matrix U is fixed, then the classification problem boils down to finding the jth row of V which gives the optimal prediction. Denoting the jth row of V by vector [math]v[/math], the matrix entry [math]X_{ij}[/math] by real number [math]x[/math], and the ith row of U by vector [math]u[/math], then the classification problem can be rephrased as finding the weight vector [math]v[/math] and predict the value of [math]x[/math] (which is either 1 or -1) by the dot production function [math]f(v)=vu^T[/math]. Usually, we specify a threshold value (for example, take the threshold as 0) and classify [math]x[/math] into 1 or -1 as follows: if [math]f(v)[/math] is greater than the threshold, then classify [math]x[/math] as 1; otherwise classify [math]x[/math] as -1.

A comparison of these three proxy loss functions is available at http://hunch.net/?p=547.

Notion of Margin in Collaborative Filtering

Assume one of the factors is fixed and the goal is to predict the other factor. This is the famous problem of linear prediction or SVM. Assume U is fixed, so predicting each column of X is in fact, solving a SVM for U to find a row in V. Recall that in SVM, to maximize the margin the norm of the linear separator [math]\|\beta\|^2[/math] should be minimized. Therefore, predicting Y with the maximum margin is equivalent to minimizing the norm of the factor V or [math]\|V\|_{F}^2[/math]. However, the problem here is to predict both U and V together (which is called collaborative filtering), but at each step, one factor can assumed to be fixed, so minimizing the norm of the other factor gives the maximum margin for this prediction.

The Optimization Problem and Trace Norm

So far it has been shown that the optimization problem is to find the factors with minimum norm such that the prediction has a low loss:

Based on the lemma 1 the optimization problem can be reformulated as:

Relation Between Rank And Trace Norm

In the literature, the notion of trace norm has been widely used instead of dealing with the rank of matrices. The next theorem explains the relation between the rank and the trace norm:

Theorem 1:
The convex envelope (smallest convex bounding function) of the rank function, on matrices with unit spectral norm, is the trace norm function.
Spectral Norm of a matrix is the absolute value of its largest eigenvalue.

In addition it can be easily be shown that the relation between the norm, trace norm and rank of a matrix is as follows:

Based on this relation, and the fact that the trace norm is a convex function, it can be shown:

which shows that the set of matrices with a bounded trace norm is Convex; also it seems that this set has the lowest rank matrices on its boundary. Thus, this optimization problem is in fact the process of searching in a convex set to optimize a convex function.

As it is possible in SVM that no linear separator can be found to satisfy the constraints (classes are not linearly separable), there exists some Y for which no factorization preserves all the knowledge from Y. So the same solution as soft-margin SVM can be used here, and one can add slack variables to the loss function:

which has a dual form with a simple structure. Also the prediction can be done using a solution to the dual problem directly.

Preliminary experiments was performed on a subset of the 100K MovieLens Dataset, consisting of the 100 users and 100 movies with the most ratings. To do this, we used CSDP to solve the resulting SDPs. The ratings are on a discrete scale of one through five, and we experimented with both generalizations of the hinge loss above, allowing per-user thresholds. As the "base line" learners, we used WLRA and K-Medians. The the data was split into four sets. For each of the these four test sets, we used the remaining sets to calculate a 3-fold cross-validation (CV) error for each method (WLRA, K-medians, trace norm and max-norm MMMF with immediate-threshold and allthreshold hinge loss) using a range of parameters (rank for WLRA, number of centers for K-medians, slack cost for MMMF). For each of the four splits, we selected the two MMMF learners with lowest CV ZOE andMAE and the two Baseline learners with lowest CV ZOE and MAE, and measured their error on the held-out test data. 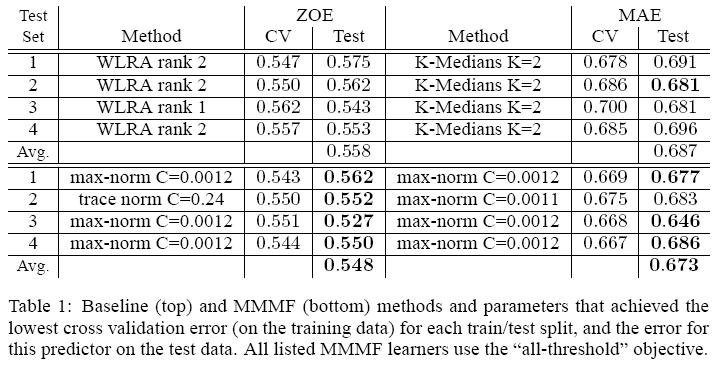 It is unrealistic that observed entries are assumed to be uniformly sampled. For example, Users tend to rate items they like. In fact, allowing any sampling distribution would guarantee low error on items the user likes, but not on items he would really like based on our prediction.