Recognizing multiple objects in images has been one of the most important goals of computer vision. In this paper an attention-based model for recognizing multiple objects in images is presented. The proposed model is a deep recurrent neural network trained with reinforcement learning to attend to the most relevant regions of the input image. It has been shown that the proposed method is more accurate than the state-of-the-art convolutional networks and uses fewer parameters and less computation.

One of the main drawbacks of convolutional networks (ConvNets) is their poor scalability with increasing input image size so efficient implementations of these models have become necessary. In this work, the authors take inspiration from the way humans perform visual sequence recognition tasks such as reading by continually moving the fovea to the next relevant object or character, recognizing the individual object, and adding the recognized object to our internal representation of the sequence. The proposed system is a deep recurrent neural network that at each step processes a multi-resolution crop of the input image, called a “glimpse”. The network uses information from the glimpse to update its internal representation of the input, and outputs the next glimpse location and possibly the next object in the sequence. The process continues until the model decides that there are no more objects to process. 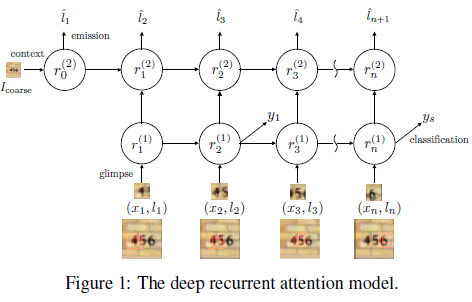 1)Learning to find digits 2)Learning to do addition (The model has to find where each digit is and add them up. The task is to predict the sum of the two digits in the image as a classification problem)

The recurrent attention models only process a selected subset of the input have less computational cost than a ConvNet that looks over an entire image. Also, they can naturally work on images of different size with the same computational cost independent of the input dimensionality. Moreover, the attention-based model is less prone to over-fitting than ConvNets, likely because of the stochasticity in the glimpse policy during training.