Instead of automatically updating all the entries of the code in parallel, we might consider strategically selecting a single component to be updated each iteration. Coordinate Descent (CoD) adopts this mentality, and resultantly yields a superior approximation to the parallel ISTA methods in the same order of time. In fact, Coordinate Descent was widely believed to be the most efficient algorithm available for approximating sparse codes.

The CoD algorithm is presented below:

In each iteration of the procedure, we search for the entry of the current code which, if updated so as to minimize the corresponding loss while holding the other components constant, results in the largest change in comparison to the current code. This search step takes [math] \, O(m) [/math] operations, and, so in also accounting for each component-wise optimization performed (which follows a similar process to that of the parallel case), each iteration requires [math] \, O(m^2) [/math] steps. Alternatively, we could repeat the update process [math] \, O(n) [/math] times instead, to achieve a per-iteration complexity of [math] \, O(nm) [/math], which is again comparable to ISTA. This algorithm has a similar feedback concept to ISTA, but can it can expressed as a linear feedback operation with a very sparse matrix (since only one component is updated at a time). Either way, it turns out that, deploying both for an approximately equal amount of time, Coordinate Descent will out-perform the ISTA methods in its approximation to an optimal code. 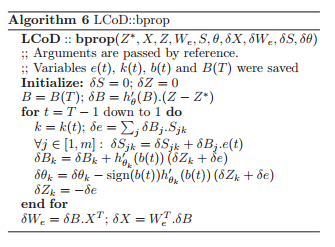 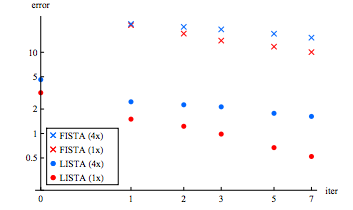 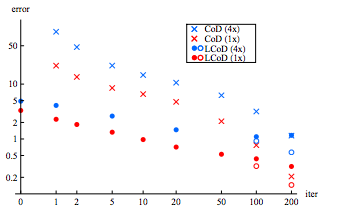