This paper<ref>Kavukcuoglu, K, Sermanet, P, Boureau, Y, Gregor, K, Mathieu, M, and Cun, Y. . Learning convolutional feature hierarchies for visual recognition. In Advances in neural information processing systems, 1090-1098, 2010.</ref> describes methods for learning features extracted through convolutional feature banks. In particular, it gives methods for using sparse coding convolutionally. This paper proposed to improve the feature extraction efficiency by jointly learning a feed-forward encoder with the convolutional filter bank, and applied the algorithm to Convolutional Networks (ConvNets), achieving impressive results on object recognition. In fact, Natural images, sounds, and more generally, signals that display translation invariance in any dimension, are better represented using convolutional dictionaries. sparse coding typically assumes that training image patches are independent from each other, and thus neglects the spatial correlation among them. In sparse coding, the sparse feature vector z is constructed to reconstruct the input x with a dictionary D. The procedure produces a code z* by minimizing the energy function:

D is obtained by minimizing the above with respect to D: [math]\underset{z,D}{\operatorname{arg\ min}} \ L(x,z,D)[/math], averaged over the training set. The drawbacks to this method are that the representation is redundant and that the inference for a whole image is computationally expensive. The reason is that the system is trained on single image patches in most applications of sparse coding to image analysis, which produces a dictionary of filters that are essentially shifted versions of each other over the patch and reconstructed in isolation.

This first problem can be addressed by applying sparse coding to the entire image and treating the dictionary as a convolutional filter bank. Invariance is classically achieved by regularization of the latent representation, e.g., by enforcing sparsity.

Where Wk is an encoding convolutional kernel of size s×s, and f is a point-wise non-linear function. Both the form of f and the method to find z* are discussed below. Here, they used feed-forward neural networks to approximate sparse codes generated by sparse coding and avoided solving computationally costly optimizations at runtime.

The second important point in training convolutional dictionaries is the computation of the S = [math]D_{T}^T ∗ D [/math] operator. For most algorithms like coordinate descent , FISTA and matching pursuit [12], it is advantageous to store the similarity matrix (S) explicitly and use a si128 convolutional filters (W) learned in the encoder using smooth shrinkage function. ngle column at a time for updating the corresponding component of code z. For convolutional modeling, the same approach can be followed with some additional care. In patch based sparse coding, each element [math](i, j) [/math] of S equals the dot product of dictionary elements i and j. Si128 convolutional filters (W) learned in the encoder using smooth shrinkage function. 128 convolutional filters (W) learned in the encoder using smooth shrinkage function. nce the similarity of a pair of dictionary elements has to be also considered in spatial dimensions, each term is expanded as “full” convolution of two dictionary elements [math] (i, j)[/math], producing [math]2s−1×2s−1[/math] matrix. It is more convenient to think about the resulting matrix as a 4D tensor of size [math]K × K × 2s − 1 × 2s − 1 [/math]. One should note that, depending on the input image size, proper alignment of corresponding column of this tensor has to be applied in the z space. One can also use the steepest descent algorithm for finding the solution to convolutional sparse coding given in equation 2, however using this method would be orders of magnitude slower compared to specialized algorithms like CoD and the solution would never contain exact zeros. In algorithm 1 we explain the extension of the coordinate descent algorithm for convolutional inputs. Having formulated convolutional sparse coding, the overall learning procedure is simple stochastic (online) gradient descent over dictionary D: In the above, [math]\beta = D^T * mask(x)[/math] is use to handle boundary effects, where mask operates term by term and either puts zeros or scales down the boundaries. 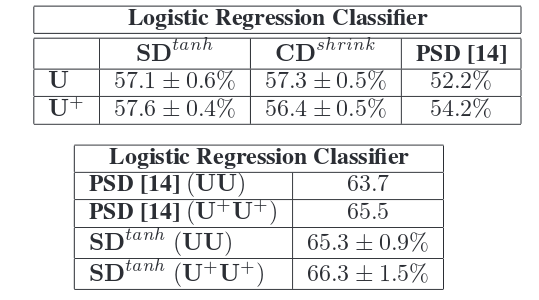 The architecture for the pedestrian detection task is similar to that described in the previous section. It was trained both with and without unsupervised initialization, followed by supervised training. After one pass of training, the negative set was augmented with the 10 most offending samples on each full negative image.

variations in the dataset where a pure supervised learning algorithm fails