This Paper explores a new training principle for unsupervised learning of a representation based on the idea of making the learned representations robust to partial corruption of the input pattern. This approach can be used to train autoencoders, and these denoising autoencoders can be stacked to initialize deep architectures. The algorithm can be motivated from a manifold learning and information theoretic perspective or from a generative model perspective.

A Denoising Autoencoder reconstructs a clean “repaired” input from a corrupted, partially destroyed one. This is done by first corrupting the initial input [math]x[/math] to get a partially destroyed version [math]\tilde{x}[/math] by means of a stochastic mapping. In this paper the noise is added by randomly zeroing a fixed number, [math]v_d[/math], of components and leaving the rest untouched. Thus the objective function can be described as

The process of mapping a corrupted example to an uncorrupted one can be visualized in Figure 2, with a low-dimensional manifold near which the data concentrate. We learn a stochastic operator p(X|~X) that maps an ~X to an X.

The denoising autoencoder can thus be seen as a way to define and learn a manifold. The intermediate representation Y = f(X) can be interpreted as a coordinate system for points on the manifold (this is most clear if we force the dimension of Y to be smaller than the dimension of X). More generally, one can think of Y = f(X) as a representation of X which is well suited to capture the main variations in the data, i.e., on the manifold. When additional criteria (such as sparsity) are introduced in the learning model, one can no longer directly view Y = f(X) as an explicit low-dimensional coordinate system for points on the manifold, but it retains the property of capturing the main factors of variation in the data. 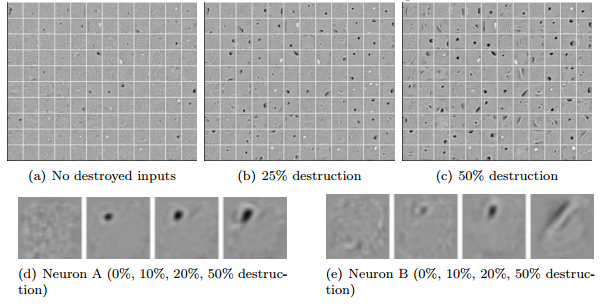 The paper shows a denoising Autoencoder which was motivated by the goal of learning representations of the input that are robust to small irrelevant changes in input. Several perspectives also help to motivate it from a manifold learning perspective and from the perspective of a generative model. This principle can be used to train and stack autoencoders to initialize a deep neural network. A series of image classification experiments were performed to evaluate this new training principle. The empirical results support the following conclusions: unsupervised initialization of layers with an explicit denoising criterion helps to capture interesting structure in the input distribution. This in turn leads to intermediate representations much better suited for subsequent learning tasks such as supervised classification. The experimental results with Deep Belief Networks (whose layers are initialized as RBMs) suggest that RBMs may also encapsulate a form of robustness in the representations they learn, possibly because of their stochastic nature, which introduces noise in the representation during training