The first hidden layer was trained as an autoencoder to reduce the dimensionality of the feature in an unsupervised manner. This method of pretraining the network has been used in deep architecture to initialize learning near a good local minimum. In the second stage of training, the weights from the input layer to the first hidden layer are fixed, and 10 additional inputs corresponding to tissues are appended. The vector representation for tissue is a binary vector. For example, it takes the form [0 1 0 0 0] to denote the second tissue out of five possible types. Moreover, the weights connected to the rest hidden layers of the DNN are then trained together in a supervised layers with backpropagation method.

The DNN weights were initialized with small random values sampled from a zero-mean Gaussian distribution. Learning was performed with stochastic gradient descent with momentum and dropout, where mini-batches were constructed. A small L1 weight penalty was included in the cost function. The model’s weights were updated after each mini-batch. The learning rate was decreased with epochs [math]\epsilon[/math], and also included a momentum term [math]\mu[/math] that starts out at 0.5, increasing to 0.99, and then stays fixed. The weights of the model parameters [math]\theta[/math] were updated as follows: 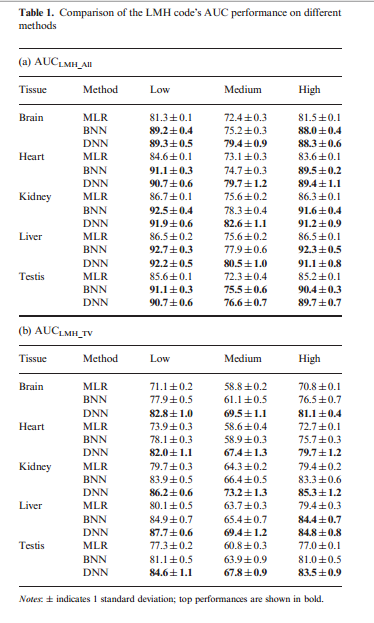