Difference between revisions of "convex and Semi Nonnegative Matrix Factorization"

In the paper ‘Convex and semi non negative matrix factorization’, Jordan et al <ref name='Ding C'> Ding C, Li. T, and Jordan I. M; “Convex and semi nonnegative matrix factorization”. </ref> have proposed new NMF like algorithms on mixed sign data, called Semi NMF and Convex NMF. They also show that a kernel form of NMF can be obtained by ‘kernelizing’ convex NMF. They explore the connection between NMF algorithms and K means clustering to show that these NMF algorithms can be used for clustering in addition to matrix approximation. These new variants of algorithm thereby, broaden the application areas of NMF algorithm and also provide better interpretability to matrix factors.

It has been shown that it is a NP hard problem and is convex in only F or only G but not convex in both F and G simultaneously <ref name='S. S Lee'> Lee S. S and Seung S. H; “Algorithms for Non-negative Matrix Factorization”. </ref> Also, the factors F and G are not always sparse and many different sparsification schemes have been applied to NMF.

In semi NMF, the matrix G is constrained to be nonnegative whereas the data matrix X and the basis vectors of F are unconstrained, that is:

They were motivated to this kind of factorization by K means clustering. The objective function of K means can be written in the form of matrix approximation as follows:

K means clustering objective function can be viewed as Semi NMF matrix approximation with relaxed constraint on G. That is G is allowed to range over values (0, 1) or (0, infinity).

While in Semi NMF, there is no constraint imposed upon the basis vector F, but in Convex NMF, the columns of F are restricted to be a convex combination of columns of data matrix X, such as:

In this factorization each column of matrix F is a weighted sum of certain data points. This implies that we can think of F as weighted cluster centroids.

As F is considered to represent weighted cluster centroid, the constraint [math] \sum _{i=1}^n w_i = 1 [/math] must be satisfied. But the authors do not actually state this.

Considering G and F as the result of matrix factorization through SVD, Convex-NMF, and semi-NMF factorizatrion, It can be shown that Semi-NMF and Convex-NMF factorizations gives clustering results identical to the K-means clustering.
Sharper indicators of the clustering is given by Convex-NMF.
[math]\,F_{cnvx}[/math] is close to [math]\,C_{Kmeans}[/math], however, [math]\,F_{semi}[/math]is not. The intuition behind this is taht F can have large effects on subspace factorization
Getting larger residual values, [math]\,\||X-FG^T\||[/math] for Convex-NMF comes up with the fact that more highly constrained Convex-NMF

As already stated, the factors for semi NMF are computed by using an iterative updating algorithm that alternatively updates F and G till convergence is reached.


(ii)Convergence of the solution given by update rule:

The auxiliary function is a useful concept because of the following lemma:

Therefore the authors of the paper, found an auxiliary function and its global minimum for the cost function of Semi NMF.

(The derivation of auxiliary function and its minimum can be found in the paper <ref name='Ding C'> Ding C, Li. T, and Jordan I. M; “Convex and semi nonnegative matrix factorization” </ref>.)

Here, again the factors G and W are computed iteratively by alternative updating until convergence.

The objective function to be minimized for convex NMF is:

Theorem 2: Fixing W, under the update rule for G, (A) the residual [math]\|X - XWG^T \|^2 [/math] decreases monotonically (non-increasing), and (B) the solution converges to a KKT fixed point.

The correctness and convergence of these rules is demonstrated in a manner similar to Semi NMF by replacing F=XW.

Theorem 3: Fixing G, under the update rule for W, (A) the residual [math]\|X - XWG^T \|^2 [/math] decreases monotonically (non-increasing), and (B) the solution converges to a KKT fixed point.

The correctness is demonstrated by minimizing the objective function with respect to W and then obtaining KKT fixed point condition as:

At convergence, the update rule for W can be shown to satisfy:


Convergence of these rules is demonstrated in a manner similar to Semi NMF by finding an auxiliary function and its global minimum.

NMF is shown to learn parts based representation and therefore has sparse factors. But there is no means to control the degree of sparseness and many sparsification methods have been applied to NMF in order to obtain better parts based representation <ref name='Ding C'> Ding C, Li. T, and Jordan I. M; “Convex and semi nonnegative matrix factorization” </ref> , <ref name='Simon D. H' > Simon D. H, Ding C, and He X; “On the Equivalence of Nonnegative Matrix Factorization and Spectral Clustering” </ref>. However, in contrast the authors of this paper show that factors of Convex NMF are naturally sparse.

The convex NMF problem can be written as:

They use the following Lemma to show that the above optimization problem gives sparse W and G.

Consider a mapping [math] \phi [/math] that maps a point to a higher dimensional feature space, such that [math] \phi: x_i \rightarrow \phi(x_i)[/math]. The factors for the kernel form of NMF or semi NMF : [math] \phi (X) = FG^T [/math] would be difficult to compute as we need to know the mapping [math]\phi [/math] explicitly.

Also, the update rules for the convex NMF algorithm (discussed above) depend only on [math] X^TX [/math] and therefore convex NMF can be kernelized.

This factorization is called Cluster NMF as it has the same degree of freedom as in any standard clustering problem, which is G (cluster indicator).

Relationship between NMF (its variants) and K means clustering

NMF and all its variants discussed above can be interpreted as K means clustering by imposing an additional constraint [math] G^TG=I [/math], that is in each row of G there is only one nonzero element, which implies each data point can belong to only one cluster.

The authors have presented experimental results on synthetic data set to show that factors given by Convex NMF more closely resemble cluster centroids than those given by Semi NMF. However, semi NMF results are better in terms of accuracy than convex NMF. They have even compared the results of NMF, convex NMF and semi NMF with K means clustering on real dataset. They conclude that all of these matrix factorizations give better results than K means on all of the datasets they studied in terms of clustering accuracy. 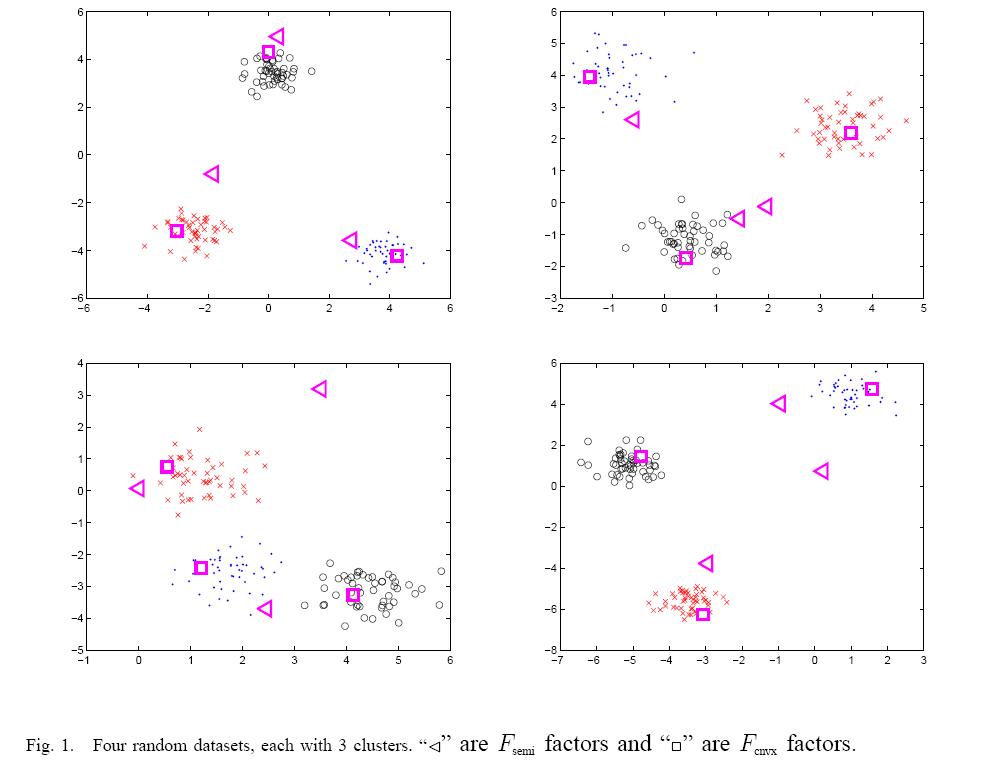 The data sets which were used are: Ionosphere and Wave from the UCI repository, the document datasets URCS, WebkB4, Reuters (using a subset of the data collection which includes the 10 most frequent categories), WebAce and a dataset which contains 1367 log messages collected from several different machines with different operating systems at the School of Computer Science at Florida International University. The log messages are grouped into 9 categories: configuration, connection, create, dependency, other, report, request, start, and stop. Stop words were removed using a standard stop list. The top 1000 words were selected based on frequencies. 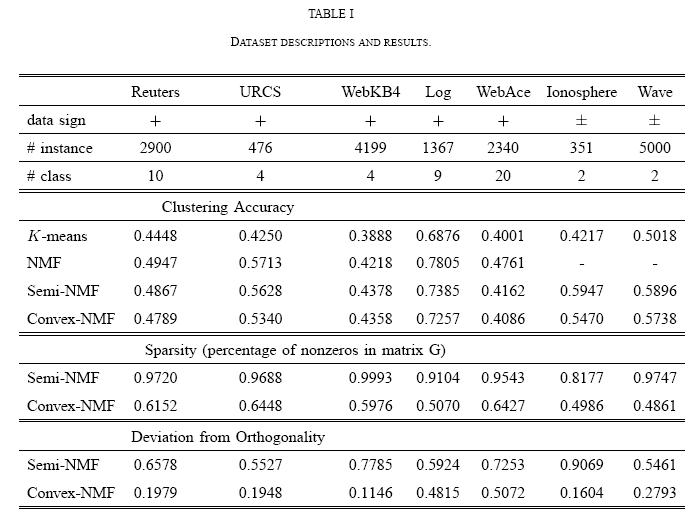 The results are shown in Table I. We derived these results by averaging over 10 runs for each dataset and algorithm. Clustering accuracy was computed using the known class labels in the following way: The confusion matrix is first computed. The columns and rows are then reordered so as to maximize the sum of the diagonal. This sum is taken as a measure of the accuracy: it represents the percentage of data points correctly clustered under the optimized permutation. To measure the sparsity of G in the experiments, the average of each column of G was computed and all elements below 0.001 times the average were set to zero. We report the number of the remaining nonzero elements as a percentage of the total number of elements. (Thus small values of this measure correspond to large sparsity). We can observe that:

1. Our main principal empirical result indicate that all of the matrix factorization models are better than K-means on all of the datasets. It states that the NMF family is competitive with K-means for the purposes of clustering.

3. On the datasets containing both positive and negative values (where NMF is not applicable) the Semi-NMF results are better in terms of accuracy than the Convex-NMF results. 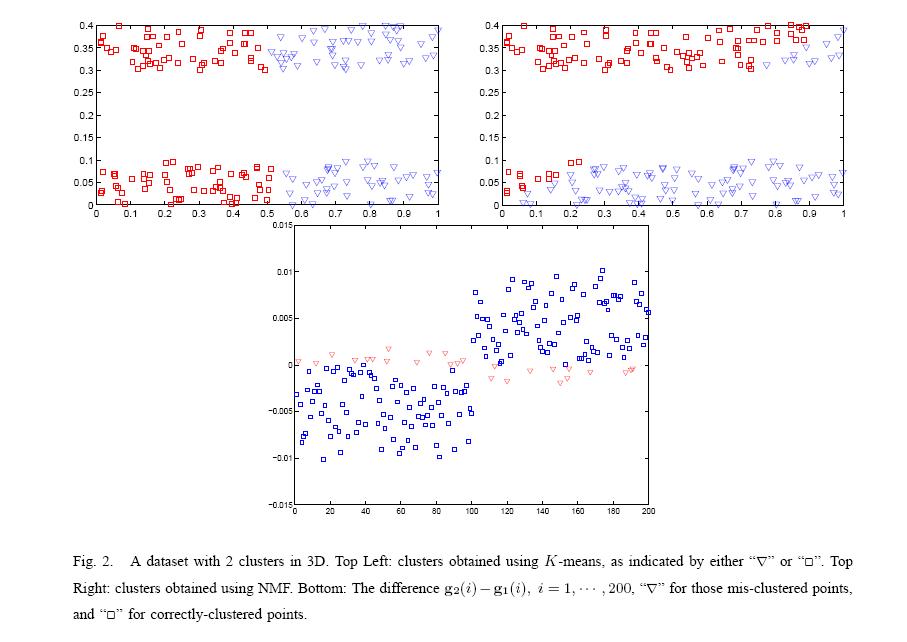 In short, the shifting approach does not appear to provide a satisfactory alternative.

In general NMF almost always performs better than K-means in terms of clustering accuracy while providing a matrix approximation. This could be due to the flexibility of matrix factorization as compared to the rigid spherical clusters that the K-means clustering objective function attempts to capture. When the data distribution is far from a spherical clustering, NMF may have advantages. Figure 2 gives an example. The dataset consists of two parallel rods in 3D space containing 200 data points. The two central axes of the rods are 0.3 apart and they have diameter 0.1 and length 1. As seen in the figure, K-means gives a poor clustering, while NMF yields a good clustering. The bottom panel of Figure 2 shows the differences in the columns of G (each column is normalized to Pi gk(i) = 1). The mis-clustered points have small differences. Note that NMF is initialized randomly for the different runs. The stability of the solution over multiple runs was investigated; The results indicate that NMF converges to solutions F and G that are very similar across runs; moreover, the resulting discretized cluster indicators were identical.