an HDP-HMM for Systems with State Persistence

Hidden Markov Model is one of the most effective and widely used probabilistic models for time series data. A serious limitation of this model is the needs to define the number of states for the model on prior. This number cannot be easily determined in real life applications. The usual way to define it is by a trying several different numbers of states and choose the one that gives the best results (trial and error approach). This limitation can be overcomed by types of probabilistic models called “Bayesian Nonparametric Models”. Bayesian Nonparametric Models approach this problem by defining distributions that can have infinite number of parameters. However, the assumption here is that even though the distribution could has infinite number of parameters, only finite number of them is required to explain the observed data.

| type = style | image = | imageright = | style = | textstyle = | text = This article may require cleanup to meet Wikicoursenote's quality standards. The specific problem is: There is a technique called blind source separation (BSS). In this approach we assume several speakers have spoken and they may have overlap. It means that in the same time two or more speakers may speak. This method is able to separate sources when we only have the mixture of the voices. So why don't we use this method? Why it is claimed HMM is better? The limitation of explained method is that it assumes only one speaker speaks at a time but BSS doesn't have this limitation.. Please improve this article if you can. (November 2011) | small = | smallimage = | smallimageright = | smalltext = }} 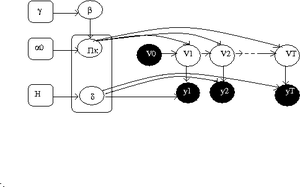