Difference between revisions of "a neural representation of sketch drawings"

The authors offer two motivations for their work:

Note: What is a corpus (plural corpora)?

In linguistics, a corpus (plural corpora) or text corpus and structured set of texts (nowadays usually electronically stored and processed). They are used to do statistical analysis and hypothesis testing, checking occurrences or validating linguistic rules within a specific language territory. A corpus may contain texts in a single language (monolingual corpus) or text data in multiple language (multilingual corpus).

The decoder is a mono-directional LSTM that accepts a sequence of hidden states [math]h=(h_1,\ldots, h_m) \in H'[/math] from the latent space and a 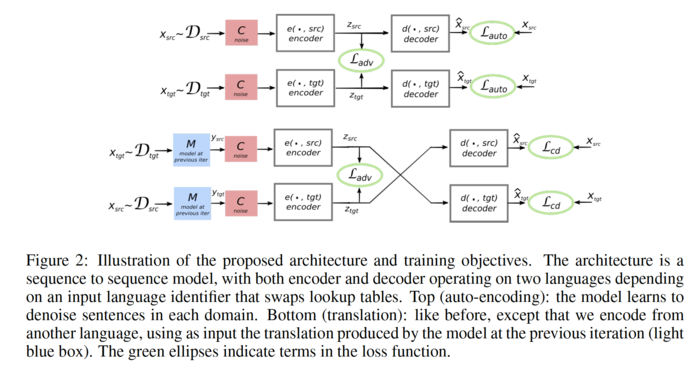 The objective function is the sum of:

To compute the translation loss, we sample a sentence from one of the languages, translate it with the encoder and decoder of the previous epoch, and then corrupt its

The intuition underlying the latent space is that it should encode the meaning of a sentence in a language-independent way. Accordingly, the authors introduce an

Combining the above-described terms, we can write the overall objective function. Let [math]Q_S[/math] denote the monolingual dataset for the

The authors' aim is for their method to be completely unsupervised, so they do not use parallel corpora even for the selection of hyper-parameters. Instead, they validate

The authors test their method on four data sets. The first is from the English-French translation task of the Workshop on Machine Translation 2014 (WMT14). This data set

This paper's results are impressive: that it is even possible to translate between languages without parallel data suggests that languages are more similar than we might

From Conneau et al. (2017). The final row shows the performance of alignment method used in the present paper. Note the degradation in performance for more distant languages.

From the present paper. Results of an ablation study. Of note are the first, third, and forth rows, which demonstrate that while the translation component of the loss is relatively unimportant, the word vector alignment scheme and de-noising auto-encoder matter a great deal.

The principal of performing unsupervised translation by starting with a rough but reasonable guess, and then improving it using knowledge of the structure of target