Experimental reproducibility in machine learning has been known to be an issue for some time. Researchers attempting to reproduce the results of old algorithms have come up short, raising concerns that lack of reproducibility hurts the quality of the field. Lack of open source AI code has only exacerbated this, leading some to go so far as to say that "AI faces a reproducibility crisis" [1]. It has been argued that the ability to reproduce existing AI code, and making these codes and new ones open source is a key step in lowering the socio-economic barriers of entry into data science and computing. Recently, the graph representation learning field has attracted the attention of a wide research community, which resulted in a large stream of works. As such, several Graph Neural Network models have been developed to effectively tackle graph classification. However, experimental procedures often lack rigorousness and are hardly reproducible. The authors tried to reproduce the results from such experiments to tackle the problem of ambiguity in experimental procedures and the impossibility of reproducing results. They also Standardized the experimental environment so that the results could be reproduced while using this environment.

A graph is a data structure consisting of nodes and edges. Graph neural networks are models that take graph-structured data as input and capture information of the input graph, such as relation and interaction between nodes. In graph neural networks, nodes aggregate information from their neighbors. The key idea is to generate representations of nodes depending on the graph structure.

They provide a convenient way for node level, edge level, and graph level prediction task. The intuition of GNN is that nodes are naturally defined by their neighbors and connections. A typical application of GNN is node classification. Essentially, every node in the graph is associated with a label, and we want to predict the label of the nodes without ground-truth.

Now going one level of abstraction higher graphs can be categorized by structural patterns, we will refer to these as the types of graphs and this will not be an exhaustive list. A Bipartite graph (a) is one in which there are two sets of vertices [math]V_1[/math] and [math]V_2[/math] and there does not exist, [math] v_i,v_j \in V_k [/math] where [math]k=1,2[/math] s.t. [math]v_i[/math] and [math]v_j [/math] share an edge, however, [math]\exists v_i \in V_1, v_j \in V_2[/math] where [math]v_i[/math] and [math]v_j [/math] share an edge. A Path graph (b) is a graph where, [math]|V| \geq 2[/math] and all vertices are connected sequentially meaning each vertex except the first and last have 2 edges, one coming from the previous vertex and one going to the next vertex. A Cycle graph (c) is similar to a path graph except each node has 2 edges and are connected in a loop, meaning if you start at any vertex and follow an edge of each node going in one direction it will eventually lead back to the starting node. These are just three examples of graph types in reality there are many more and it can beneficial to be able to connect the structure of ones data to an appropriate graph type.

The goal of risk assessment is to provide an estimate of the performance of a class of models. When a test set is not explicitly given, a common way to proceed is to use k-fold Cross-Validation. As the model selection is performed independently for each training/test split, they obtain different “best” hyper-parameter configurations; this is why they refer to the performance of a class of models.

The goal of model selection, or hyperparameter tuning, is to choose among a set of candidate hyperparameter configurations the one that works best on a specific validation set. It also important to acknowledge the selection bias when selecting a model as this makes the validation accuracy of a selected model from a pool of candidates models a biased test accuracy.

The authors of DGCNN use a faulty method of tuning the learning rate and epoch. They used only a single fold for tuning hyperparameters despite evaluating the model on a 10-fold CV. This potentially leads to suboptimal performance. They haven't released the code for the experiments. Lastly, they average the one-fold CV across 10 folds and then report the numbers. This also reduces variance.

It has not been clearly stated in the paper whether the results come from a test set or if they come from a validation set. Moreover, the standard deviation over the 10-fold CV has also not been reported. Due to no random seeds, different data splits are there while performing multi-fold splits (without stratification).

The results of the paper do not report the standard deviation obtained during the 10-fold Cross-Validation. Like in the case of GDCNN, the model selection procedure is not made clear due to pre-determined hyper-parameters. The code repository is not available as well.

Instead of reporting the test accuracy, the authors have given the validation accuracy over the 10-fold CV. Therefore, the given results are not suitable for evaluating the model. Code repository is not available for selecting the model.

All graph datasets used are publicly available (Kersting et al., 2016) and represent a relevant a subset of those most frequently used in literature to compare GNNs. 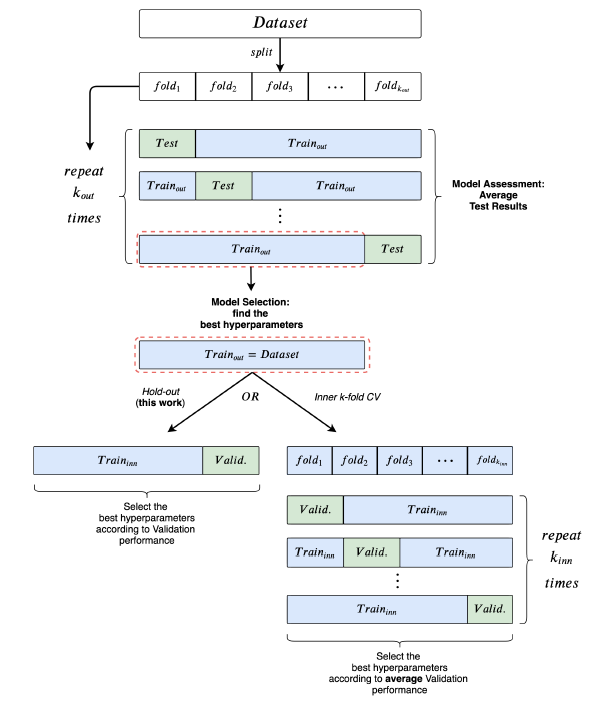 Effect of Node Degree on Layering

The above table displays the median number of selected layers in relation to the addition of node degrees as input features on all social datasets. 1 indicates that an uninformative feature is used as a node label. 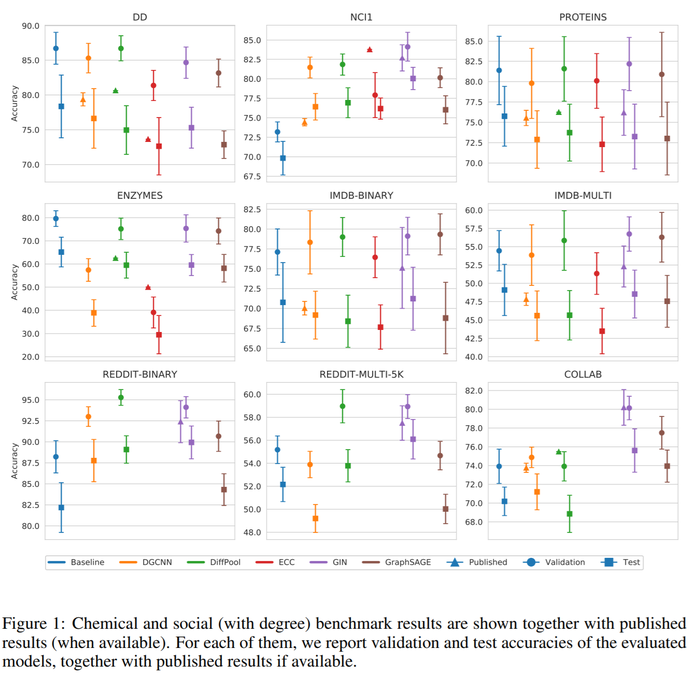 In the above figure, we can see the comparison between the average values of test results obtained by the authors of the paper and those reported in the literature. In addition to that, the validation results across the 10 different model selections were plotted. The plots show how the test accuracies calculated in this paper are in most cases different from what reported in the literature, and the gap between the two estimates is usually consistent. Also, the average validation accuracies calculated by the authors are always higher or equal to the test results.

The data and scripts to reproduce the experiments reported in the paper are available at https://github.com/diningphil/gnn-comparison .

This paper raises an important issue about the reproducibility of some important 5 graph neural network models on 9 datasets. The reproducibility and replicability problems are very important topics for science in general and even more important for fast-growing fields like machine learning. The authors proposed a unified scheme for evaluating reproducibility in graph classification papers. This unified approach can be used for future graph classification papers such that the comparison between proposed methods becomes clearer. The results of the paper are interesting as in some cases the baseline methods outperform other proposed algorithms. Finally, I believe one of the main limitations of the paper is the lack of technical discussion. For example, this was a good idea to discuss in more depth why baseline models are performing better? Or why the results across different datasets are not consistent? Should we choose the best GNN based on the type of data? If so, what are the guidelines?