The Rank Minimization Problem (RMP) has applications in a variety of areas including control theory, system identification, statistics and signal processing. Except in some special cases the RMP is known to be computationally hard.

Nuclear Norm Heuristic: A Generalization Of The Trace Heuristic

Solving the rank minimization problem using the trace norm heuristic is not possible when the matrix under consideration is non-symmetric, or non-square. In this case, the authors develop a new heuristic. This heuristic minimizes the sum of the singular values of the matrix [math]X \in \real^{m\times n}[/math], which is known as the nuclear norm or Ky-Fan n-norm of [math]\,X[/math] denoted by [math]\|X\|_*[/math].

When the matrix variable [math]\,X[/math] is symmetric and positive semidefinite, then its singular values are the same as its eigenvalues, and therefore the nuclear norm reduces to [math]\,\mbox{Tr } X[/math], so the nuclear norm heuristic reduces to the trace minimization heuristic.

Expressing as an SDP Problem

We can then use the following lemma to transform the constraints into linear matrix inequalities (LMIs).

The nuclear norm minimization problem can now be expressed as

where [math]\,Y=Y^T, Z=Z^T[/math] are new variables. If the constraint set [math]\,C[/math] can be expressed as linear matrix inequalities then the problem is an SDP, and can be solved using available SDP solvers.

The transfer matrix is measured for a few frequencies, [math]\omega_1,\dots,\omega_K\in \real[/math] with accuracy [math]\,\epsilon \gt 0[/math]. The matrices [math]\,G_k[/math] are given as the measured approximation of [math]\,H(j\omega_k)[/math].Note that [math]H(j\omega_k)[/math] is a linear function of the variables [math]R_i[/math]. Therefore we have the following minimization problem:

This optimization problem can be expressed as a SDP problem as discussed in the previous section. 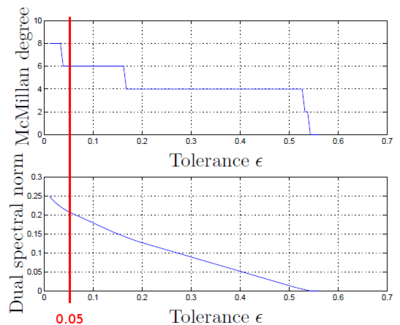 Consider a MIMO system (i.e. multiple inputs and outputs); in particular, we will analyze one with 2 inputs and 2 outputs. We have a normalized transfer matrix [math]F[/math] (i.e. [math]\|F\|_{\infty} = 1[/math]). Additionally, assume this matrix is of order 8 so that we have poles [math]p_1,\dots,p_8[/math] which come in pairs (i.e. complex conjugates). The goal is to reduce the order while minimizing the information lost.

Solving the SDP representation of the problem discussed in the previous section ([math]\epsilon = 0.05[/math]) gives an approximation of order 6. Additionally, the 8th order and 6th order representations are similar and are the same in many cases.