Since [math] L_{task} [/math] focuses only on the dominant hard label prediction the inter-class alignment across domains is disregarded. Hence, minimising symmetrized Kullback–Leibler (KL) divergence across domains, averaged over all [math] C [/math] classes has been used:

Explicit metric learning, i.e. contrastive or triplet losses, have been used to ensure that the semantic features, locally cluster according to only class labels, regardless of the domain.

Notably, MASF outperforms MLDG [26], in the table below on this dataset, indicating that semantic properties would provide superior performance with respect to purely highly-abstracted task loss on meta-test. "DeepAll" in the table is the case in which there is no domain generalization. In DeepAll case the class label has just been used regardless of the domain each sample would lie in.

As you can see in the table below, MASF outperforms state of the art JiGen[3], MLDG[26], MetaReg[1], significantly. In addition, the best improvement has achieved (6.20%) when the unseen domain is "sketch", which requires more general knowledge about semantic concepts since it is different from other domains significantly.

The effectiveness of the MASF has been also demonstrated using a segmentation task of MRI images gathering from four different clinical centers denoted as (Set-A, Set-B, Set-C, and Set-D). The domain shift, in this case, would occur due to differences in hardware, acquisition protocols, and many other factors, hindering translating learning-based methods to real clinical practice. 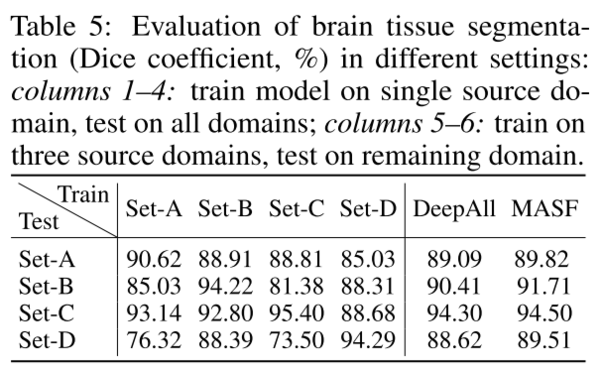 A new domain generalization technique by taking the advantage of incorporating global and local constraints for learning semantic feature spaces presented which outperforms the state-of-the-art. The effectiveness of this method has been demonstrated using two domain generalization benchmarks and a real clinical dataset (MRI image segmentation).