In this paper, the “one-class” classification, whose goal is to obtain accurate discriminators for a special class, has been studied. Popular uses of this technique include anomaly detection which is widely used in detecting outliers. Anomaly detection is a well-studied area of research; however, the conventional approach of modeling with typical data using a simple function falls short when it comes to complex domains such as vision or speech. Another case where this would be useful is when recognizing “wake-word” while waking up AI systems such as Alexa.

Thus, in this paper, a new approach called Deep Robust One-Class Classification (DROCC) was presented to solve the above concerns. DROCC is based on the assumption that the points from the class of interest lie on a well-sampled, locally linear low dimensional manifold. More specifically, we are presenting DROCC-LF which is an outlier-exposure style extension of DROCC. This extension combines the DROCC's anomaly detection loss with standard classification loss over the negative data and exploits the negative examples to learn a Mahalanobis distance.

Traditional approaches for one-class problems include one-class SVM (Scholkopf et al., 1999) and Isolation Forest (Liu et al., 2008)[9]. One drawback of these approaches is that they involve careful feature engineering when applied to structured domains like images. The current state of art methodologies to tackle this kind of problems are: 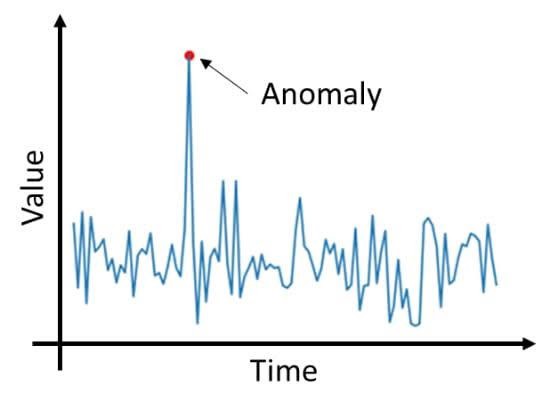 (b): Decision boundary learned by DROCC when applied to the data from (a). Blue represents points classified as normal and red points are classified as abnormal. We observe from here that DROCC is able to capture the manifold accurately; whereas the classical methods OC-SVM and DeepSVDD perform poorly as they both try to learn a minimum enclosing ball for the whole set of positive data points.

To especially tackle problems such as anomaly detection and outlier exposure (Hendrycks et al., 2019a) [7], DROCC–LF, an outlier-exposure style extension of DROCC was proposed. Intuitively, DROCC–LF combines DROCC’s anomaly detection loss (that is over only the positive data points) with standard classification loss over the negative data. In addition, DROCC–LF exploits the negative examples to learn a Mahalanobis distance to compare points over the manifold instead of using the standard Euclidean distance, which can be inaccurate for high-dimensional data with relatively fewer samples. (See Figure 1c, 1d for illustration)

Table 2 shows F1-Score (with standard deviation) for one-vs-all anomaly detection on Thyroid, Arrhythmia, and Abalone datasets from the UCI Machine Learning Repository. DROCC outperforms the baselines on all three datasets by a minimum of 0.07 which is about an 11.5% performance increase. Results on One-class Classification with Limited Negatives (OCLN):

MNIST 0 vs. 1 Classification: We consider an experimental setup on the MNIST dataset, where the training data consists of Digit 0, the normal class, and Digit 1 as the anomaly. During the evaluation, in addition to samples from training distribution, we also have half zeros, which act as challenging OOD points (close negatives). These half zeros are generated by randomly masking 50% of the pixels (Figure 2). BCE performs poorly, with a recall of 54% only at a fixed FPR of 3%. DROCC–OE gives a recall value of 98:16% outperforming DeepSAD by a margin of 7%, which gives a recall value of 90:91%. DROCC–LF provides further improvement with a recall of 99:4% at 3% FPR.

Wake word Detection: Finally, we evaluate DROCC–LF on the practical problem of wake word detection with low FPR against arbitrary OOD negatives. To this end, we identify a keyword, say “Marvin” from the audio commands dataset (Warden, 2018) [8] as the positive class, and the remaining 34 keywords are labeled as the negative class. For training, we sample points uniformly at random from the above-mentioned dataset. However, for evaluation, we sample positives from the train distribution, but negatives contain a few challenging OOD points as well. Sampling challenging negatives itself is a hard task and is the key motivating reason for studying the problem. So, we manually list close-by keywords to Marvin such as Mar, Vin, Marvelous, etc. We then generate audio snippets for these keywords via a speech synthesis tool 2 with a variety of accents. Figure 3 shows that for 3% and 5% FPR settings, DROCC–LF is significantly more accurate than the baselines. For example, with FPR=3%, DROCC–LF is 10% more accurate than the baselines. We repeated the same experiment with the keyword: Seven, and observed a similar trend. In summary, DROCC–LF is able to generalize well against negatives that are “close” to the true positives even when such negatives were not supplied with the training data.

For computational efficiency, we simplified the projection set of both methods which can perhaps slow down the convergence of the two methods. Designing optimization algorithms that can work with the stricter set is an exciting research direction. Further, we would also like to rigorously analyze DROCC, assuming enough samples from a low-curvature manifold. Finally, as OCLN is an exciting problem that routinely comes up in a variety of real-world applications, we would like to apply DROCC–LF to a few high impact scenarios.

It would be interesting to see how the DROCC method performs in situations where the anomaly is very rare, say detecting signals of volcanic explosion from seismic activity data. Such challenging anomalous situations will be a test of endurance for this method and can even help advance work in this area.

5. This is a nice summary and the authors introduce clearly on the performance of DROCC. It is nice to use Alexa as an example to catch readers' attention. I think it will be nice to include the algorithm of the DROCC or the architecture of DROCC in this summary to help us know the whole view of this method. Maybe it will be interesting to apply DROCC in biomedical studies? since one-class classification is often used in biomedical studies.

6. The training method resembles adversarial learning with gradient ascent, however, there is no evaluation of this method on adversarial examples. This is quite unusual considering the paper proposed a method for robust one-class classification, and can be a security threat in real life in critical applications.