Difference between revisions of "User:Cvmustat"

Text classification is the task of assigning a set of predefined categories to natural language texts. It is a fundamental task in Natural Language Processing (NLP) with various applications such as sentiment analysis, and topic classification. A classic example involving text classification is given a set of News articles, is it possible to classify the genre or subject of each article? Text classification is useful as text data is a rich source of information, but extracting insights from it directly can be difficult and time consuming as most text data is unstructured.[1] NLP text classification can help automatically structure and analyze text, quickly and cost-effectively, allowing for individuals to extract important features from the text easier than before.

In practice, pre-trained word embeddings and deep neural networks are used together for NLP text classification. Word embeddings are used to map the raw text data to an implicit space where the semantic relationships of the words are preserved; words with similar meaning have a similar representation. One can then feed these embeddings into deep neural networks to learn different features of the text. Convolutional neural networks can be used to determine the semantic composition of the text(the meaning), as it treats texts as a 2D matrix by concatenating embedding of words together, and it is able to capture both local and position invariant features of the text.[2] Alternatively, Recurrent Neural Networks can be used to determine the contextual meaning of each word in the text (how each word relates to one another) by treating the text as sequential data and then analyzing each word separately. [3] Previous approaches to attempt to combine these two neural networks to incorporate the advantages of both models involve streamlining the two networks, which might decrease their performance. In addition, most methods incorporating a bi-directional Recurrent Neural Network usually concatenate the forward and backward hidden states at each time step, which results in a vector that does not have the interaction information between the forward and backward hidden states.[4] The hidden state in one direction contains only the contextual meaning in that particular direction, however a word's contextual representation, intuitively, is more accurate when collected and viewed from both directions. This paper argues that the failure to observe the meaning of a word in both directions causes the loss of the true meaning of the word, especially for polysemic words (words with more than one meaning) that are context sensitive. 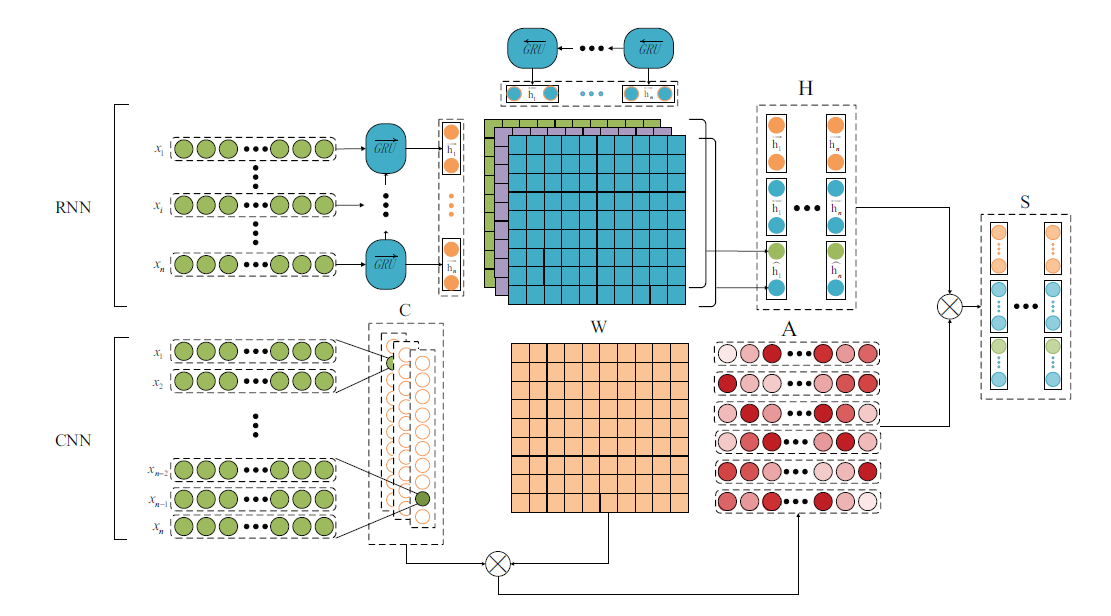 This paper proposed a new architecture, the Convolutional Recurrent Neural Network, for text classification. The Convolutional Neural Network is used to learn the relative importance of each word from different aspects and stores it into a weight matrix. The Recurrent Neural Network learns each words contextual representation through the combination of the forward and backward context informations that are fused using a neural tensor layer and is stored as a matrix. These two matrices are then combined to get the text representation used for classification. Although the specifics of the performed tests are lacking, the experiment's results indicate that the proposed method performed well in comparison to most previous methods. In addition to performing well, the proposed method also provides insight into which words contribute greatly to the classification decision as the learned matrix from the Convolutional Neural Network stores the relative importance of each word. This information can then be used in other applications or analysis. In the future, one can explore the features that extracted from the model and use them to potentially learn new methods such as model space. [5]