Risk assessment lies at the core of the Life Insurance Industry. It is extremely important for companies to assess the risk of an application accurately to ensure that those submitted by actual low risk applicants are accepted, whereas applications submitted by high risk applicants are either rejected or placed aside for further review. The types of risks include but are not limited to, a person's smoking status, and family history (such as history of heart disease). If this is not the case, individuals with an extremely high risk profile might be issued policies and when they pass away and the company will face large losses due to high insurance payouts. Such a situation is called ‘Adverse Selection’, where individuals who are most likely to be issued a payout are in fact given a policy and those who are not as likely are not, thus causing the company to suffer losses as a result.

Traditionally, the process of Underwriting (deciding whether or not to insure the life of an individual) has been done using Actuarial calculations. Actuaries group customers according to their estimated levels of risk determined from historical data. (Cummins J, 2013) However, these conventional techniques are time-consuming and it is not uncommon to take a month to issue a policy. They are expensive as a lot of manual processes need to be executed and a lot of data needs to be imported for the purpose of calculation.

Predictive Analysis has emerged as a useful technique to streamline the underwriting process to reduce the time of Policy issuance and to improve the accuracy of risk prediction. In life insurance, this approach is widely used in mortality rates modeling to help underwriters make decisions and improve the profitability of the business. In this paper, the authors use data from Prudential Life Insurance company and investigate the most appropriate data extraction method and the most appropriate algorithm to assess risk. 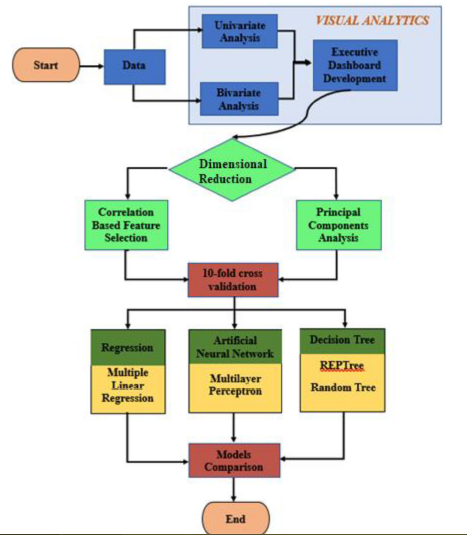 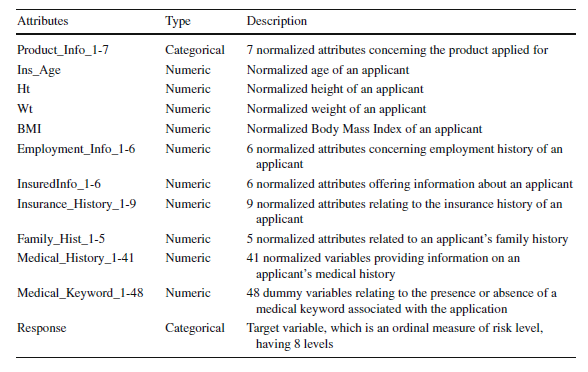 1.Correlation based Feature Selection (CFS): This is a feature selection method in which a subset of features from the original features is selected. In this method, the algorithm selects features from the dataset that are highly correlated with the output but are not correlated with each other. The user does not need to specify the number of features to be selected. The correlation values are calculated based on measures such a Pearson’s coefficient, minimum description length, symmetrical uncertainty, and relief.

4.Artificial Neural Network: In a neural network, the inputs are transformed into outputs via a series of layered units where each of these units transforms the input received via a function into an output that gets further transmitted to units down the line. The weights that are used to weigh the inputs are improved after each iteration via a method called backpropagation in which errors propagate backward in the network and are used to update the weights to make the computed output closer to the actual output.

Attributes, where more than 30% of Data was missing, were dropped from the analysis. The data were tested for Missing Completely at Random (MCAR), one form of the nature of missing values using the Little Test. The null hypothesis that the missing data was completely random had a p-value of 0 meaning, MCAR was rejected. Then, all the variables were plotted to check how many missing values that they had, and the results are shown in the figure below:

Assuming that missing data follows a MAR pattern, multiple imputations are used as a technique to fill in the values of missing data. The steps involved in Multiple Imputation are the following:

The Correlation-based Feature Selection (CFS) method was performed using the Waikato Environment for Knowledge Analysis. It was implemented using a Best-first search method on a CfsSubsetEval attribute evaluator. 33 variables were selected out of the total of 117 features. PCA was implemented via a RankerSearch Method using a Principal Components Attributes Evaluator. Out of the 117 features, those that had a standard deviation of more than 0.5 times the standard deviation of the first principal component were selected and this resulted in 20 features for further analysis. After dimensionality reduction, this reduced data set was exported and used for building prediction models using the four machine learning algorithms discussed before – REPTree, Multiple Linear Regression, Random Tree, and ANNs. The results are shown in the table below:

For CFS, the REPTree model had the lowest MAE and RMSE. For PCA, the Multiple Linear Regression Model had the lowest MAE as well as RMSE. So, for this dataset, it seems that overall, Multiple Linear Regression and REPTree Models are the two best ones in terms of the lowest error rates. In terms of dimensionality reduction, it seems that CFS is a better method than PCA for this data set as the MAE and RMSE values are lower for all ML methods except ANNs.

Predictive Analytics in the Life Insurance Industry is enabling faster customer service and lower costs by helping automate the process of Underwriting, thereby increasing satisfaction and loyalty. In this study, the authors analyzed data obtained from Prudential Life Insurance to predict risk scores via Supervised Machine Learning Algorithms. The data was first pre-processed to first replace the missing values. Attributes having more than 30% of missing data were eliminated from the analysis. Two methods of dimensionality reduction – CFS and PCA were used and the number of attributes used for further analysis was reduced to 33 and 20 via these two methods. The Machine Learning Algorithms that were implemented were – REPTree, Random Tree, Multiple Linear Regression, and Artificial Neural Networks. Model validation was performed via ten-fold cross-validation. The performance of the models was evaluated using MAE and RMSE measures. Using the PCA method, Multiple Linear Regression showed the best results with MAE and RMSE values of 1.64 and 2.06 respectively. With CFS, REPTree had the highest accuracy with MAE and RMSE values of 1.52 and 2.02 respectively. Further work can be directed towards dealing with all the variables rather than deleting the ones where more than 30% of the values are missing. Customer segmentation, i.e. grouping customers based on their profiles can help companies come up with a customized policy for each group. This can be done via unsupervised algorithms like clustering. Work can also be done to make the models more explainable especially if we are using PCA and ANNs to analyze data. We can also get indirect data about the prospective applicant like their driving behavior, education record, etc to see if these attributes contribute to better risk profiling than the already available data.

The project built multiple models and had utilized various methods to evaluate the result. They could potentially ensemble the prediction, such as averaging the result of the different models, to achieve a better accuracy result. Another method is model stacking, we can input the result of one model as input into another model for better results. However, they do have some major setbacks: sometimes, the result could be effect negatively (ie: increase the RMSE). In addition, if the improvement is not prominent, it would make the process much more complex thus cost time and effort. In a research setting, stacking and ensembling are definitely worth a try. In a real-life business case, it is more of a trade-off between accuracy and effort/cost.

In addition, the dimensionality reduction techniques seem to contradict each other. If we do select features based on their correlation, there is no need to do further PCA on the dataset. Even if we perform PCA, the resulting columns would have a similar number of columns compared to the original ones and it would lose interpretability of the features, which is crucial in real-life practices.