The paper presents an unsupervised Neural Machine Translation (NMT) method that uses monolingual corpora (single language texts) only. This contrasts with the usual supervised NMT approach which relies on parallel corpora (aligned text) from the source and target languages being available for training. This problem is important because parallel pairing for a majority of languages, e.g. for German-Russian, do not exist.

The paper uses the methodology proposed by [Artetxe, 2017] to do cross-lingual embedding aligning in an unsupervised manner and without parallel data. Without going into the details, the general approach of this paper is starting from a seed dictionary of numeral pairings (e.g. 1-1, 2-2, etc.), to iteratively learn the mapping between 2 language embeddings, while concurrently improving the dictionary with the learned mapping at each iteration. This is in contrast to earlier work which used dictionaries of a few thousand words.

There has been significant work in statistical deciphering techniques (decipherment is the discovery of the meaning of texts written in ancient or obscure languages or scripts) to develop a machine translation model from monolingual data (Ravi & Knight, 2011; Dou & Knight, 2012). These techniques treat the source language as ciphertext (encrypted or encoded information because it contains a form of the original plain text that is unreadable by a human or computer without the proper cipher for decoding) and model the generation process of the ciphertext as a two-stage process, which includes the generation of the original English sequence and the probabilistic replacement of the words in it. This approach takes advantage of the incorporation of syntactic knowledge of the languages. The use of word embeddings has also shown improvements in statistical decipherment.

There are also proposals that use techniques other than direct parallel corpora to do neural machine translation(NMT). Some use a third intermediate language that is well connected to the source and target languages independently. For example, if we want to translate German into Russian, we can use English as an intermediate language(German-English and then English-Russian) since there are plenty of resources to connect English and other languages. Johnson et al. (2017) show that a multilingual extension of a standard NMT architecture performs reasonably well for language pairs when no parallel data for the source and target data was used during training.

The most important contribution to the problem of training an NMT model with monolingual data was from [He, 2016], which trains two agents to translate in opposite directions (e.g. French → English and English → French) and teach each other through reinforcement learning. However, this approach still required a large parallel corpus for a warm start (about 1.2 million sentences), while this paper does not use parallel data. 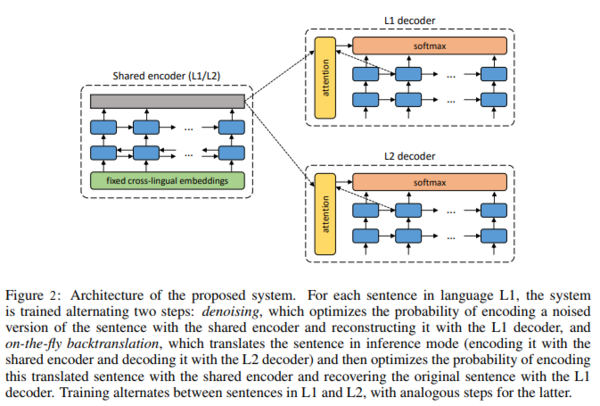 Denoising works by reconstructing a noisy version of a sentence back into the original sentence in the same language. In mathematical form, if [math]x[/math] is a sentence in language L1:

The proposed noise function is to perform [math]N/2[/math] random swaps of words that are contiguous, where [math]N[/math] is the number of words in the sentence. This noise model also helps reduce reliance of the model on the order of words in a sentence which may be different in the source and target languages. The system will also need to correctly learn the of a language to decode the sentence into the correct order. 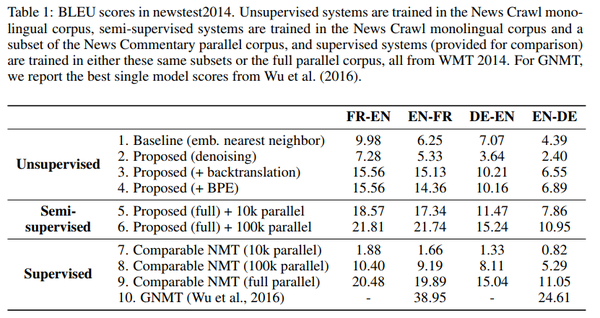 The paper adds each component piece-wise when doing an evaluation to test the impact each piece has on the final score. As shown in Table 1, Unsupervised results compared to the baseline of word-by-word results are strong, with improvement between 40% to 140%. Results also show that back-translation is essential. Denoising doesn't show a big improvement however it is required for back-translation, because otherwise, back-translation would translate nonsensical sentences. The addition of backtranslation, however, does show large improvement on all tested cases.

For the BPE experiment, results show it helps in some language pairs but detract in some other language pairs. This is because while BPE helped to translate some rare words, it increased the error rates in other words. It also did not perform well when translating named entities which occur infrequently. 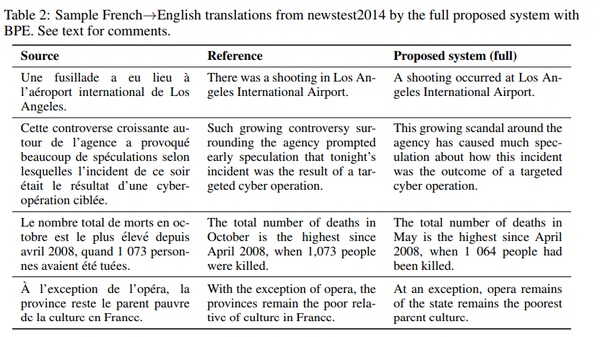