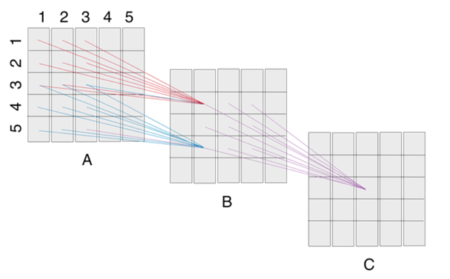 Receptive field of a unit is the region of input where the unit 'sees' and responds to. When dealing with high-dimensional inputs such as images, it is impractical to connect neurons to all neurons in the previous volume. Instead, we connect each neuron to only a local region of the input volume. The spatial extent of this connectivity is a hyper-parameter called the receptive field of the neuron (equivalently this is the filter size) [].

Authors claim that the ERF results in the experimental section have Gaussian shapes but they never prove this claim. For example, they could fit different 2D-functions, including 2D-Gaussian, to the kernels and show that 2D-Gaussian gives the best fit. Furthermore, the pictures given as proof of the claim that the ERF has a Gaussian distribution only show the ERF of the center pixel of the output [math] y_{0,0} [/math]. Intuitively, the ERF of an node near the boundary of the output layer may have a a significantly different shape. This was not addressed in the paper.

Another weakness is in the discussion section, where they make a connection to the biological networks. They jumped to disprove a well-observed phenomena in the brain. The fact that the neurons in the higher areas of the visual hierarchy gradually lose their retinotpic property has been shown in countless number of neuroscience studies. For example, grandmother cells do not care about the position of grandmother's face in the visual field. In general, the similarity between deep CNNs and biological visual systems is not as strong, hence we should take any generalization from CNNs to biological networks with a grain of salt.