Difference between revisions of "Understanding Image Motion with Group Representations"

Supervised learning of 3D motion is challenging since explicit motion labels are no trivial to obtain. The proposed learning method does not need label data. Instead, the method constraints learning by using the properties of motion space. The paper presents a general model of visual motion, and how the motion space properties of associativity and can be used to constrain the learning of a deep neural network. The results show evidence that the learned model captions motion in both 2D and 3D settings.

There are also works using CNN’s to learn optical flow using brightness constancy assumptions, and/or photometric local constraints. Works on stereo depth estimation using learning has also shown results. Regarding to image sequences, there are works on shuffling the order of images to learn representations of its contents, as well as learning representations equivariant to the egomotion of the camera.

The proposed method is based on the observation that 3D motions, equipped with composition forms a group. By learning the underlying mapping that captures the motion transformations, we are approximating latent motion of the scene.The method is designed to capture group associativity and invertibility.

These constraints are true to any type of transformation resulting from image motion. This puts little restriction on the learning problems and allows all features relevant to the motion structure to be captured.

Also with this method, it is possible multiple representations [math] \overline{M} [/math] can be learned from a single [math] M [/math], thus the learned representation is not necessary unique. In addition, the scenes are not expected to have rapid changing contents, scene cuts, or long-term occlusions.

The functions [math] \Phi [/math] and [math] \diamond [/math] are approximated by CNN and RNN, respectively. LSTM is used for RNN. The input to the network is a sequence of images [math] I_t = \{I_1,...,I_t\} [/math]. The CNN processes pairs of images are intermediate representations, and the LSTM operates over the sequence of CNN outputs to produce and embedding sequence [math] R_t = \{R_{1,2},...,R_{t-1,t}\} [/math]. Only the embedding at the final timstep is used for loss. The network is trained to minimize a hinge loss with respect to embeddings to pairs of sequences. The cost function is:

Each training sequence is composed into 6 subsequences: two forward, two backward, and two identity. To prevent the network from only looking at static differences, subsequence pairs are sampled such that they have the same start and end frames but different motions in between. Sequences of varying lengths are also used to generalize motion on different temporal scale. Training the network with only one input images per timestep is also tried, but consistently yielded work results than image pairs. 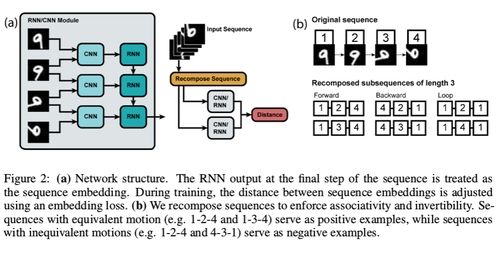 Overall, training with image pairs resulted in lower error than training with just single images. This is demonstrated in the below table. 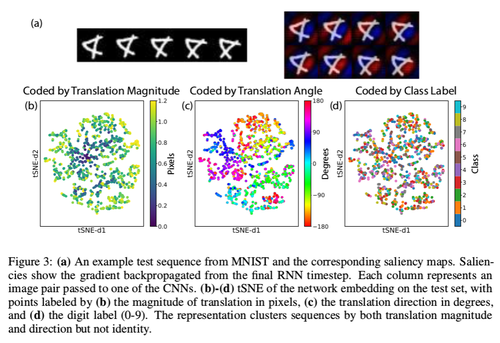 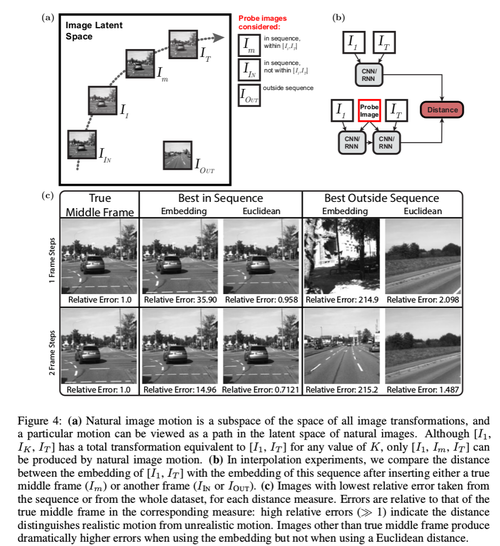 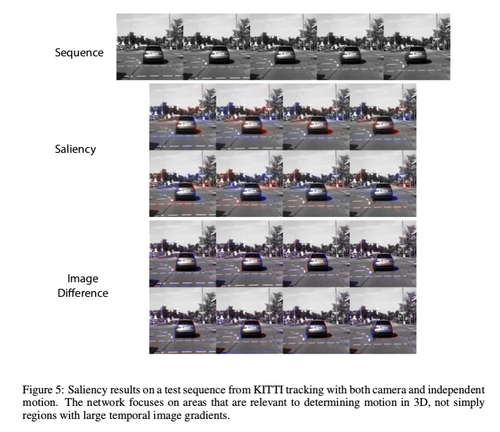 The author presented a new model of motion and method for learning motion representations. It is shown that enforcing group properties can learn motion representations that is able to generalize between scenes with disparate content. The results can be useful for navigation, prediction, and other behavioral tasks relying on motion. Due to the fact that this method does not require labelled data, it can be applied to useful for large variety of tasks.

Although this method does not require any labelled data, it is still learning by supervision through defined constraints. The idea of training using unlabelled data is interesting and it does have meaningful practical application. Unfortunately, the author did not provide convincing experimental results. Results from motion estimation problems are typically compared against ground truth data for their accuracy. The author performed experiments on transformed MNIST data and KITTI data. The MNIST data is transformed by the author, thus the ground truth is readily available. However the author only claimed the validity of the results through indirect means of using t-SNE and saliency map visualization. For the KITTI dataset, the author regressed the representations against ground truth for some mapping from the network output to some physical motion representation. Again, the results again compared only indirectly against ground truth. Such experimentation made the method hardly convincing and applicable to real world applications. In addition, the network does not output motion representations with physical meanings, make the proposed method useless for any real world applications.