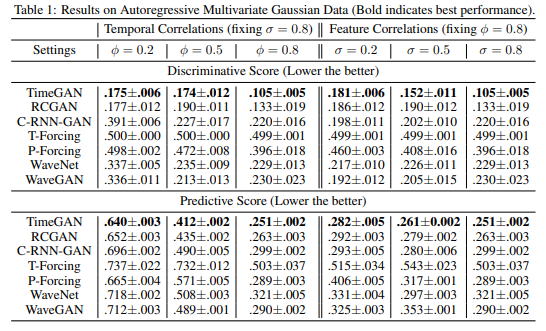 Next, the paper has experimented on different types of Time Series Data. Using time-series sequences of varying properties, the paper evaluates the performance of TimeGAN to testify for its ability to generalize over time-series data. The paper uses datasets like Sines, Stocks, Energy, and Events with different methods to see their performance. Figure 2 shows t-SNE/PCA visualization comparison for Sines and Stocks and it is clear from the figure that among all different models, TimeGAN shows the best overlap between generated and original data. 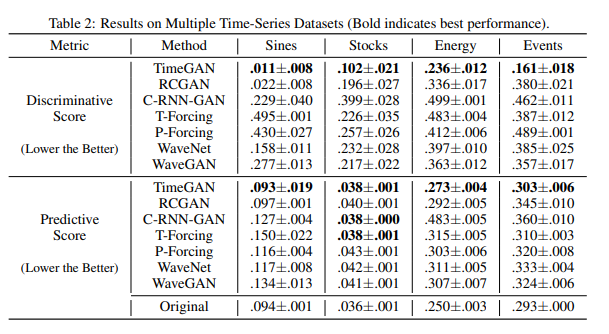 The method introduced in this paper is truly a novel one. The idea of enhancing the unsupervised components of a GAN with some supervised element has shown significant jumps in certain evaluations. I think the methods of evaluation used in this paper namely, t-SNE/PCA analysis (visualization), discriminative score and predictive score; are very appropriate for this sort of analysis where the focus is on multiple things (generative accuracy and conditional dependence) both quantitatively and qualitatively. Other related works [9] have also used the same evaluation setup.

TimeGAN benefits from merging supervised and unsupervised learning to create their generations while other methods in the literature benefit from learning their conditional input to create its generations. I believe after even considering the supervised an unsupervised learning, the way that the authors introduced temporal embeddings to assist network training is not designed well for anomaly detection (outlier detection) as it is only designed for time series representation learning as discussed in [10].