The autonomous vehicle trajectory approaches previously used motion models like Constant Velocity and Constant Acceleration. These models are linear and are only able to handle straight motions. There are curvilinear models such as Constant Turn Rate and Velocity and Constant Turn Rate and Acceleration which handle rotations and more complex motions. Together with these models, Kalman Filter is used to predict the vehicle trajectory. However, the performance of Kalman Filter in predicting multi-step problem is not that good. Recurrent Neural Network performs significantly better than it.

There are 3 main challenges to achieving fully autonomous driving on urban roads, which are scene awareness, inferring other drivers’ intentions, and predicting their future motions. Researchers are developing prediction algorithms that can simulate a driver’s intuition to improve safety when autonomous vehicles and human drivers drive together. To predict driver behavior on an urban road, there are 3 categories for the motion prediction model: (1) physics-based; (2) maneuver-based; and (3) interaction-aware. Physics-based models are simple and direct, which only consider the states of prediction vehicles kinematically. The advantage is that it has minimal computational burden among the three types. However, it is impossible to consider the interactions between vehicles. Maneuver-based models consider the driver’s intention and classified them. By predicting the driver maneuver, the future trajectory can be predicted. Identifying similar behaviors in driving is able to infer different drivers' intentions which are stated to improve the prediction accuracy. However, it still an assistant to improve physics-based models.

Recurrent Neural Network (RNN) is a type of approach proposed to infer driver intention in this paper. Interaction-aware models can reflect interactions between surrounding vehicles, and predict future motions of detected vehicles simultaneously as a scene. While the prediction algorithm is more complex in computation which is often used in offline simulations. As Schulz et al. indicate, interaction models are very difficult to create as "predicting complete trajectories at once is challenging, as one needs to account for multiple hypotheses and long-term interactions between multiple agents" [6]. 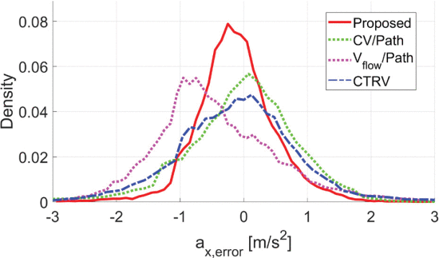 Understandably, a supervised learning problem should be evaluated on some test dataset. However, supervised learning techniques are inherently ill-suited for general planning problems. The test dataset was obtained from human driving data which is known to be extremely noisy as well as unpredictable when it comes to motion planning. It would be crucial to determine the successes of this paper based on the state-of-the-art reinforcement learning techniques.