High performance neural networks often have a very large number of training parameters. Frankle and Carbin [2] propose the Lottery Ticket Hypothesis that a trained neural network will contain many smaller subnetworks containing the most important logic. When training these subnetworks in isolation after the initialization, they can acheive similar accuracy compared to the original network. Ramanujan et al [10] further proposes that the subnetworks can achieve similar accuracy without having to be further trained. However, finding these lottery tickets inside a large neural network is computationally expensive (NP hard in general).

Empirical Network Pruning: The theory on neural network pruning has transitioned from pruning individual connections based on the loss function [5] to pruning connections based on its magnitude [3]. Papers began to focus on pruning entire neurons [4] or convolution channels [6that could be redundant. Recently, the focus has shifted to instead find a smaller subnetwork inside an overparameterized network with comparable predictive power and prune the rest.

Theoretical Study of Network Pruning: Some research has looked into pruning FCNs with ReLU activation. Their work used the idea that a single ReLU neuron can be approximated using a two-hidden-layer neural network with constant width [8][9]. Other methods of pruning currently being researched are a greedy optimization based pruning method [11] and sampling-based pruning algorithms based on sensitivity scores [1][7].

Pruning is a 3-step process that can be summarized as:

The figure [3] below demonstrates both pruning individual weights/synapses and pruning neurons. 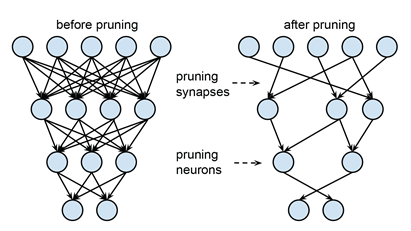 Magnitude based pruning refers to reducing the number of weights in a layer based on the weight’s absolute value. The intuition behind this is that the weights with values close to zero, do not contribute significantly to the predictive ability of the network. To perform this, a mask matrix M, which has the same size as the weight matrix, is used. M has all entries equal to 1, except elements corresponding to weights to be pruned where the entry is instead 0. These weights are selected based on their magnitude. In the pruned network, the mask is multiplied element-wise with the weight matrix before re-training.

The paper we are reviewing relies on proofs that are both technical and lengthy. The authors use 9 lemmas spanning order statistics, random matrix theory and probability theory in order to prove the main results. Furthermore, the authors provide 4 pruning techniques (with corresponding proofs). However these proofs are all quite similar. Consequently, we will not present the technical details of the proof, since we feel this would be too long and too complicated for a (relatively) short review. Instead, we hope to:

Clarifying the Objects of Study

In [18] the authors define the following standard objects and notation:

The authors in [18] also define the some more idiosyncratic objects:

Intuition Behind the Objects

In general the objects defined above are either defined to formally express a pruned network, or to provide some measure of efficacy for a given pruned network. In the former category are mask matrices, pruned weight matrices and prunings of the target network. The latter consists of [math]\epsilon[/math]-closeness and the compression ratio. 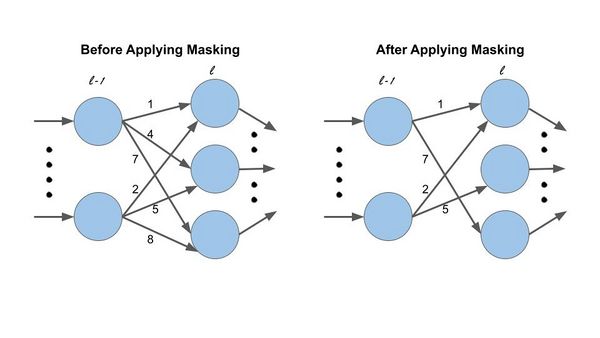 Hence we see that the activation input is different between the pruned and unpruned weight matrices. But crucially, the [math]i^{\text{th}}[/math] component [math]x_{i}[/math] of the weight matrix input [math]x[/math] has no influence of the [math]j^{\text{th}}[/math] component [math]z_{j}[/math] of the activation input [math]z[/math] if [math]\left[M_{l}\right]_{ji}=0[/math], and the influence of the [math]x_{i}[/math] on [math]z_{j}[/math] is unaltered when [math]\left[M_{l}\right]_{ji}=0[/math]. This is what we mean by saying [math]M_{l}[/math] switches — or prunes — connections in a weight matrix. Its effect is tantamount to severing a connection between the inputs of a weight matrix (or, outputs of the previous layer’s activation function) and the inputs of the layer’s activation function.

Since [math]W_{l}=M\circ W_{l}^{*}[/math], [math]W_{l}[/math] is naturally interpreted as the weight matrix of a network that has had its connections pruned by [math]M_{l}[/math]. Finally, [math]f(x)[/math] has the same same general architecture as [math]F(x)[/math] — its activation functions, number of layers and nodes. If every [math]M_{ji}=0[/math] for some [math]i\in d_{l-1}[/math], then it is clear the value of [math]x_{i}^{l}[/math] will make no contribution to the vector [math]z[/math]. However, strictly speaking the [math]i^{\text{th}}[/math]node of layer [math]l-1[/math] is still part of the network — it’s just vestigial. are the same as [math]F(x)[/math]. The only difference between [math]f(x)[/math] and [math]F(x)[/math] is that the former uses pruned weight vectors, while the latter uses the original, unpruned weight vectors. In this way it is clear that [math]f(x)[/math] just represents a subnetwork of [math]F(x)[/math] which has had its connections pruned as specified by the matrices [math]M_{l},\ l\in\{1,...,L\}[/math].

The discussion above makes it clear that [math]f(x),M_{l},W_{l}[/math] are defined as a means of formally representing a pruned subnetwork of some FCN. However, we ultimately wish to describe the efficacy of the pruned network. Of particular imporance are how much “smaller” the pruned subnetwork is compared to its corresponding FCN, and the discrepancies between the predictions of the pruned and FC network.

The Main Result: Magnitude Based Pruning

With this context, we state the main result of the paper:

We note that [math]\alpha[/math] effectively specifies [math]\gamma_{l}=D_{l}^{-\alpha}[/math], so although it is not directly stated in the theorem, the compression ratio is present.

Unpacking and Justifying the Assumptions:

As previously stated we will not provide a full characterization of the proof. Instead, we clarify why the authors made the three assumptions that appear in the theorem.

First, we comment on the Lipschitz continuity of [math]\sigma_{k}[/math]. For our purposes function [math]g:\mathbb{R}^{n}\rightarrow\mathbb{R}^{n}[/math] is Lipschitz continuous iff [math]||g(x)-g(y)||_{2}\leq K||x-y||_{2}[/math] for any [math]x,y\in\mathbb{R}^{n}[/math] (see [20] for more details on Lipschitz continuity). The intuition when [math]g:\mathbb{R}\rightarrow\mathbb{R}[/math] is that [math]g[/math] is Lipschitz just when its value never changes quicker than the function [math]h(x)=Kx[/math]. The reason the activation functions are Lipschitz continuous is just because the proof of the main theorem relies on random matrix theory and, in particular, the probability that the 2-norms of random matrices exceed certain bounds. By ensuring that [math]||\sigma(z_{l}^{*})-\sigma(z_{l})||_{2}\leq K_{l}||W_{l}^{*}x_{l}-W_{l}x_{l}||_{2}[/math] the authors are able to extend the results of bounding the difference between vectors under random matrices, to bounding the difference between vectors under non-linear transformations (see section 4 of [18]). So, the results of random matrix theory can be harnessed to prove the main results.

The second assumption is largely used to provide tighter bounds on the probabilities given in the relevant theorem. As such its role is mostly related to technical details (again see section 4 of [18]).

Finally, the third assumption is by far the most important assumption. As previously mentioned, the main proof relies on a few theorems imported from random matrix theory [18]. In particular, the main theorem heavily relies on [15, 17], of which the former only applies to independent, mean zero random matrices with finite fourth moments and the latter which applies to (sub-Gaussian) iid random matrices.

The first two assumptions are easy to justify. For the first assumption, we note that in practice most activation functions are Lipschitz continuous. For instance, the sigmoid, ReLU, tanh and softmax functions are all Lipschitz continuous with [math]K=1[/math] (see [19]). So this is clearly a reasonable assumption. The second assumption is even easier to justify. One can simply set all [math]d\geq\max\{d_{0},d_{l}\}[/math] when designing the architecture of the FCN [math]F(\cdot)[/math]. Hence the first two assumptions will almost always hold in practice.

Unlike the first two assumptions, the third assumption is not evidently the case. Assuming that [math]\{W_{l}^{*}\ |\ l\in\{1,...,L\}\}[/math] are i.i.d. random is a priori strong assumption with no particularly strong justification. Given this difficulty, the authors essentially argue that because (1) there is no way to effectively measure how close weights are to independence, (2) some literature — namely [14, 15]— suggests that weights in a trained network do not deviate strongly from their initial values. However, in our view it is clear that this constitutes only a partial, if not promising, justification for assumption (iii). Consequently the most important assumption for the main theorem is also the least secure.

Issues raised by Blalock et al argue that in general, the community surrounding neural network pruning research suffers from a lack of standardization. Definitions tend to be ambiguous and comparisons are difficult to make between performances of different pruning algorithms. Overall, this sector will see much more research and focus in the near future. This paper is a foundation for theoretical works regarding pruning both FCNs and CNNs. Importantly, since nearly all network architectures can be replaced by some combination of FCNs and CNNs, this paper has application in pruning many different architectures. Applying these results to past works by Frankle & Carbin in 2018 gives a method to determine an upper bound on the number of weights available for pruning in a given layer in order to maintain the desired error margin.

The paper’s analysis assumes that weights in the original network are independent. This assumption is not ideal, especially in CNNs. While the paper’s appendix discusses ways around it, no solution could be found. The authors suggest that an in-depth study of this assumption is warranted in the future. Another topic not explored fully is using gradients of the weights in the original network to determine more optimal pruning algorithms.