From statwiki
(Redirected from Self-Taught Learning)
Jump to: navigation, search 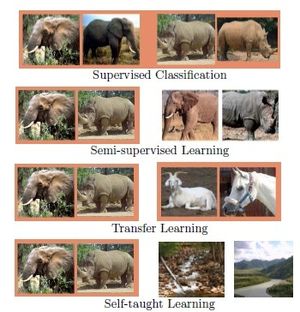 Self-taught learning is a new paradigm in machine learning introduced by Stanford researchers in 2007 <ref name="Raina">Raina et al, (2007). "Self-taught Learning: Transfer Learning from Unlabeled Data". Proceedings of the 24th International Conference on Machine Learning, Corvallis, OR.</ref>. The full paper can be found here. It builds on ideas from existing supervised, semi-supervised and transfer learning algorithms. The differences between these methods depend on the usage of labeled and unlabeled data (Figure 1):

The main advantage of this approach is that unlabeled similar data is often easier and cheaper to obtain than labeled data belonging to our classes. Additionally, the data from other classes often shares characteristics with data belonging to the desired classes that can be useful in supervised learning. For example, in the context of image classification, unlabeled images can be used to learn edges so that labeled images can be constructed as a linear combination of these base images. Classification of sound and text are also applications that self-taught learning can be applied to.

The self-taught learning algorithm can be summarized as follows:

There is much freedom as to how to accomplish each of the three steps. Existing techniques can be used, namely in the classification step. However, there is also a lot of room for new techniques to be developed in this area that are tailored specifically to the idea of self-taught learning.

With that said, a specific algorithm will be discussed for each step to give some idea of how it works.

There are numerous techniques that can potentially be used to construct a new representation of the data. A particular one, the sparse-coding algorithm by Olshausen and Field <ref name="OF1996"> Olshausen, B. A., & Field, D. J.. (1996) "Emergence of simple-cell receptive field properties by learning a sparse code for natural images". Nature, 381,607-609.</ref>, will be discussed here. This method aims to solve the optimization problem

The first term in the cost function has the purpose of creating [math]\,b_j[/math] and [math]a_j^{(i)}[/math] such that each unlabeled point can be approximately expressed as a linear combination of these bases and activations (weights). The [math]\,\beta||a^{(i)}||_1[/math] term acts as a penalty to ensure that the activation terms are sparse<ref>Tibshirani, R (1996). Regression shrinkage and selection via the lasso. J. R. Stat. Soc. B., 58, 267-28.</ref> <ref>Ng, A.Y. (2004). Feature selection, L1 vs. L2 regularization, and rotational invariance. ICML.</ref> Using terms other than this [math]L_1[/math] regularization leads to non-sparse activation terms which, in turn, reduce the learning performance.

Figure 2: This is an example of a patch of an image [math]x[/math] represented as a combination of three (of many) bases vectors. Diagram from <ref name="Raina"/>

Once the optimization problem is solved, the set of bases can be used on labeled data (recall that the bases were constructed using unlabeled data). That is, given the bases [math]b_1,\dots,b_s[/math], for each [math]x_{\ell}^{(i)}[/math], we need to find the corresponding weight [math]\hat{a}(x_{\ell}^{(i)})[/math]. This is achieved as follows:

This is also a convex problem with an efficient solution, yielding an approximate representation of our point in the constructed bases. Note that due to the second term, the activation vector is sparse. Figure 2 shows a sample decomposition of images into images that play the role of bases.

Once the data is in the new representation, standard supervised methods can be used to classify the data.

A Classifier Specific to Sparse-Coding

In the algorithm described above, once the data is represented in the new bases typical classifiers can be used.

However, it might be advantageous to create a classifier specific to sparse-coding with hopes of improving accuracy. Specifically, there is a natural kernel that can be used to measure similarity given that the data lies in a space constructed with sparse-coding.

Namely, there are two assumptions that can be made:

Therefore, a Fisher kernel can be used to measure similarity in the new representation<ref name="Jaakkola">Jaakkola, T., & Haussler, D. (1998). Exploiting generative models in discriminative classifiers. NIPS.</ref>. The algorithm is as follows:

A natural first comparison might be look at this method against using PCA on the unlabeled data to construct a new basis. PCA differs in two major ways: it looks for linear structure and it requires that new bases be orthogonal (thus limiting the number of dimensions in the new space to, at most, the number of dimensions in the original data). So, it is hard for PCA to form bases that represent the basic patterns that underlie the data; however, this is not a problem for sparse-coding.

In each of the experiments below there are three stages of processing:

Additionally, in some data sets, it is helpful to use the original features in addition to the new features.

In each case, both SVM and Gaussian Discriminant Analysis (GDA) were used and the best result was taken.