The Phrase-based Image Captioning Model is similar to most image captioning models except that it exploits attention and linguistic information. Several recent approaches trained the captioning model with policy gradients in order to directly optimize for the desired performance metrics. This work follows the same line. 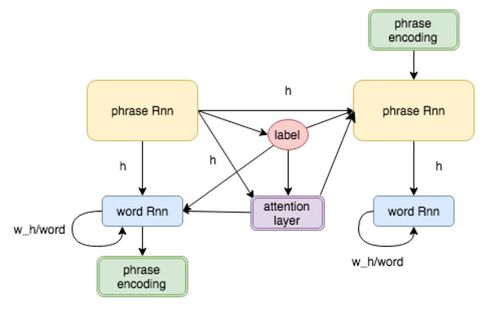 A convolutional neural network is used in order to extract a set of feature vectors $a = (a_1, \dots, a_n)$, with $a_j$ a feature in location j in the input image. These feature vectors are given to the attention layer. There are also two more inputs to the attention layer, current hidden state of the phrase-RNN and output of the label unit. The label unit predicts one out of four possible phrase labels, i.e., a noun (NP), preposition (PP), verb (VP), conjunction phrase (CP), and an additional <EOS> token to indicate the end of the sentence. This information could be useful for the attention layer. For example, when we have a NP the model may look at objects in the image, while for VP it may focus on more global information. Computations can be expressed with the following equations: $$ \text{hidden state of the phrase-RNN at time step t} \leftarrow h_t = f_{phrase}(h_{t-1}, l_{t-1}, c_{t-1}, e_{t-1})