In this work, a novel method for 3D object generation is presented. This framework, namely 3D Generative Adversarial Networks (3D GAN) is an extension of GANs for 2D image generation. Here, a probabilistic space is sampled for a latent vector representation which then passes through a set volumetric convolutional layers resulting in a novel generated 3D object. The benefits of this approach are three-fold

According to Karpathy et al. in their OpenAI blog post, there are 3 popular generative model approaches that have been widely adopted, namely Generative Adversarial Networks (GANs), Variational Autoencoders (VAEs) and Recurrent Neural Networks (RNNs) (Karpathy et al., 2016). All of these methods have their own competitive edges and the first 2 approaches are the main focus of research in this paper. In order to construct a more comprehensive picture of generative modelling, RNN approach or more specifically PixelRNN approach will be briefly explained below.

The fundamental concept of PixelRNN is to model each pixel within an image based on previous pixel and their RGB color values (Oord, Kalchbrenner, & Kavukcuoglu, 2016, p. 2). More specifically, PixelRNN “model the pixels as discrete values using a multinomial distribution implemented with a simple softmax layer.” (Oord, Kalchbrenner, & Kavukcuoglu, 2016, p. 2). Such concept can be easily explained mathematically as the following: essentially the goal of the model is to predict the probability of the next pixel [math]x_i[/math] given all previous pixels [math]x_1, …, x_{i - 1} [/math]. Furthermore, probability of each pixel [math] P(x_i) [/math] is also influenced by 3 color channels (red, blue & green or RGB). Thus, overall the probability of a pixel [math]x_i[/math] can be presented by the following equation:

In Oord, Kalchbrenner, & Kavukcuoglu‘s paper, they estimated [math] P(x_i) [/math] as “as a discrete distribution, with every conditional distribution being a multinomial that is modeled with a softmax layer.” (Oord, Kalchbrenner, & Kavukcuoglu, 2016, p. 3). However, a major limitation of this method is the computationally heavy process of sampling because of the sequence of conditional probabilities. Thus, more efficient approaches such as 3D-GANs and 3D-VAE-GANs are introduced in this paper. Reference:

In this paper, 3D Generative Adversarial Networks (3D-GANs) are presented as a simple extension of GANs for 2D imagery. Here, the model is composed of i) a generator (G) which maps a 200-dimensional latent vector $z$ to a 64 x 64 x 64 cube, representing the object G($z$) in voxel space, and ii) a discriminator (D) which outputs a confidence value D($x$) of whether a 3D object input $x$ is real or synthetic. Following Goodfellow et al. [2014], the classification loss used at the end of the discriminator is binary cross-entropy as

where $x$ is a real object in a 64 x 64 x 64 space, and $z$ is randomly sampled noise from a distribution $p(z)$. In this work coefficients of $z$ are randomly sampled from a probabilistic latent space (Uniform [0,1]).

3D-VAE-GANs as an extension of 3D-GANs introduces an additional image encoder (E), which takes as input a 2D image $y$ and outputs the latent representation vector $z$. Inspired by the work of Larsen et al. [2015] on VAE-GANs, the addition of the E component allows for a mapping between 2D objects and their 3D shapes to be learned simultaneously with the adversarial training of GANs that learn to generate synthetic but realistic 3D objects. This means that after training, a 2D image can be inputted into the 3D-VAE-GAN network resulting in a realistic rendering of the corresponding 3D object for that 2D image. One would expect that this network performs better than a singular VAE network that takes 2D images as input and outputs 3D shapes. Unfortunately the authors do not provide any comparsion between such setups.

As depicted in the figure on the right [from Larsen et al., 2015], the setup of VAE-GAN shows that VAE and GAN are combined by sharing the decoder of VAE with the generator of GAN.

As outlined in the supplementary material of this paper, the training of 3D-VAE-GAN is done in the steps below. Here, $y_i$ is a 2D image and $x_i$ is its corresponding 3D shape. In each training iteration $t$, a random sample $z_t$ is generated from $\mathcal{N}(0, I)$, and the discriminator (D), image encoder (E), and generator (G) are updated in turn.

where $E_{mean}(y_i)$ and $E_{var}(y_i)$ are the predicted mean and variance of the latent variable $z$, respectively.

The generator used in 3D-GAN follows the architecture of Radford et al.'s [2016] all-convolutional network, a neural network with no fully-connected and no pooling layers. As portrayed in Figure 1, this network comprises of 5 volumetric fully convolutional layers with kernels of size 4 x 4 x 4 and stride 2. Batch normalization and ReLU layers $(f(x) = \mathbb{1}(x \ge 0)(x))$ are present after every layer, and the final convolution layer is appended with a Sigmoid layer. The input is a 200-dimensional vector and the output is 64 x 64 x 64 matrix with values in [0,1].

Training GANs is tricky because in practice training a network to generate objects is more difficult than training a network to distinguish between real and fake samples. In other words, training the generator is harder than training the discriminator. Intuitively, it becomes difficult for the generator to extract signal for improvement from a discriminator that is way ahead, as all examples it generated would be correctly identified as synthetic with high confidence. This problem is compounded when we deal with 3D generated objects (compared to 2D) due to the higher dimensionality. There exists different strategies to overcome this challenge, some of which we saw in class:

The approach used in this paper is interesting in that it adaptively decides whether to train the network or not. Here, for each batch, D is only updated if its accuracy in the last batch is <= 80%. Additionally, the generator learning rate is set to 2.5 x 10e-3 whereas the discriminator learning rate is set to 10e-5. This further caps the speed of training for the discriminator relative to the generator. In fact, many such techniques are necessary when training GANs, due to the fact that the optimization problem they are designed to solve is inherently different from the intended goal of finding a Nash equilibrium in a non-convex game [Salimans et al.,2016]. Some recently proposed techniques include feature matching, minibatch discrimination, historical averaging, one-sided label smoothing, and virtual batch normalization [Salimans et al.,2016].

To assess the quality of 3D-GAN and 3D-VAE-GAN, the authors perform the following set of experiments 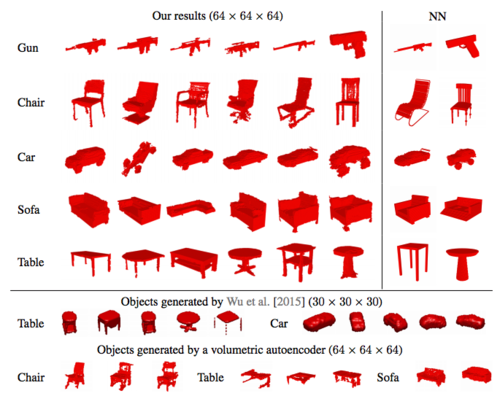 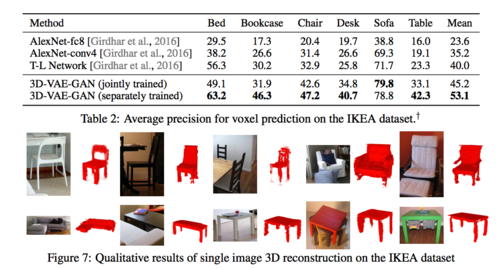 Figure 2 shows 3D objects generated by the 3D-GAN framework. To generate these objects, a 200-dimensional vector following a uniform distribution between [0,1] is passed as input to the generator, and the largest connected component in the output of the generator is taken as the generated 3D object. One 3D-GAN is trained for each object class.

Results in Figure 2 demonstrate that 3D-GANs are able to synthesize high-resolution 3D objects with detailed geometries, and subjective comparisons are highly in favor of 3D objects generated by 3D-GAN. In Figure 2, the nearest neighbours of each generated object is also depicted in the 2 right-most columns. From this, we see that generated objects via the 3D-GAN framework are novel and do not simply copy components from samples in the training set.

Another experiment conducted by the authors was to understand the latent representations of the generated objects as encoded in the discriminator. A typical way to evaluate representations learned without supervision is to use them as features for classification. Therefore, for each generated object, the authors concatenate the responses of the second, third, and fourth convolutional layers in the discriminator resulting in 1 vector representation for a given 3D object (training sample or 3D generated sample). A linear SVM was then used to perform classification using these object representations. Here, a single 3D-GAN was trained on seven major ShapeNet classes (chairs, sofas, tables, boats, airplanes, rifles, and cars), but was evaluated using the objects in both ModelNet 10 and ModelNet 40. These results are even more insightful given that the training and test sets are not identical and therefore show the out-of-category generalization power of the 3D-GAN.

Table 1 demonstrates the superior performance of 3D-GAN compared to competing unsupervised methods, and demonstrates performane on par with many supervised strategies. Only Multi-view CNNs, a method designed for classification (not generation of 3D objects) and augmented with ImageNet pretraining, is able to outperform 3D-GAN on discriminator representation classification.

Following previous work [Girdhar et al., 2016] the performance of 3D-VAE-GAN was evaluated on the IKEA dataset to demonstrate how it performs for single image 3D reconstruction. The results in Figure 7 and Table 2 show the performance of both a single 3D-VAE-GAN jointly trained on all 6 IKEA object categories, and six 3D-VAE-GANs independently trained on each category. To evalute the performance of the models across different image setup, a 3D object was generated for permutations, flips, and translational alignments (up to \%10) of an input 3D image. Then the average of generated 3D objects was compared to the 3D ground truth for the 2D image.

The results in this section show that 3D-VAE-GAN consistently outperform previous state-of-the-art method for voxel-level predictions.

In this section we explore the learned representations of the generator and discriminator in a trained 3D-GAN. Starting with a 200-dimensional vector as input, the generator neurons will fire to generate a 3D object, consequently leading to the firing of neurons in the discriminator which will produce a confidence value between [0,1]. To understand the latent space of vectors for object generation, we first vary the intensity of each dimension in the latent vector and observe the effect on the generated 3D objects. In Figure 5, each red region marks the voxels affected by changing values in a particular dimesnion of the latent vector. It can be seen that semantic meaning such as width and thickness of surfaces is encoded in each of these dimensions.

Next, we explore intra-class and inter-class object metamorphosis by interpolating between latent vector representation of a source and target 3D object. In Figure 6, we see a smooth transition exists for various types of chairs (w/ and w/o arm rests, and with varying backrest), as well as for a smooth transition between race car and speedboat.

Next, as is common in generative model evaluations, a simple arithmetic scheme is tested on latent vector representation of 3D objects. In Figure 8 shows that not only are generative networks able to encode semantic knowledge of chair and face images in its latent space, but these learned representations behave similarly as well. This can be seen because simple arithmetic on latent vector representations works in accord with intuition in Figure 8.

Finally, the authors explore the neurons in the discriminator. In order to understand firing patterns for specific neurons, the authors iterate through all training objects while keeping track of those samples that result in the highest firing intensity of a specific neuron. Here the neurons in the second-to-last convolutional layers were considered. From Figure 9, we conclude that neurons are selective: for a single neuron, the objects producing strongest activations are similar, and neurons learn semantics: the object parts that activate the neuron the most are consistent across objects.

Pre-trained models and sampling code for 3-D GAN can be found in the following git repository: https://github.com/zck119/3dgan-release. Implementations are done using Torch 7.

In this work, we have presented a novel approach to 3D object generation. We described 3D-GANs, showed their architechture, discussed loss functions, dove into the intricacies of the training process, and demonstrated their ability in generating realistic and novel high-resolution 3D objects. Furthermore, we reviewed the performance of 3D-GANs in producing feature vectors for object recognition and showed how the features learned by the discriminator outperforms all unsupervised methods, and is competitive with many supervised strategies. We extended 3D-GANs to 3D-VAE-GANs and learned a mapping from 2D images to 3D objects corresponding to the 2D image. Using 3D-VAE-GANs the authors were able to reconstruct 3D objects from a single image, with far greater accuracy than previous methods. Finally, the neurons in learned networks were analyzed and it was shown that the neurons learn disentagled features and fire selectively for different objects while learning the semantics of the objects they fire for.