From statwiki
Revision as of 01:25, 23 November 2017 by Jdeng (talk | contribs) (Created page with "= Introduction = Humans and animals learn much better when the examples are not randomly presented but organized in a meaningful order which illustrates gradually more co...")
(diff) ← Older revision | Latest revision (diff) | Newer revision → (diff)
Jump to: navigation, search

One reason for the slow adoption of curriculum learning is that it’s effectiveness is highly sensitive to the mode of progression through the tasks. One popular approach is to define a hand-chosen performance threshold for advancement to the next task, along with a fixed probability of returning to earlier tasks, to prevent forgetting (Sutskever and Zaremba, 2014). However, as well as introducing hard-to-tune parameters, this poses problems for curricula where appropriate thresholds may be unknown or variable across tasks.

The main contribution of the paper is that a stochastic policy, continuously adapted to optimize learning progress is proposed. Given a progress signal that can be evaluated for each training example, we use a multi-armed bandit algorithm to find a stochastic policy over the tasks that maximizes overall progress. The bandit is non-stationary because the behaviour of the network, and hence the optimal policy, evolves during training. Moreover variants of prediction gain, and also a novel class of progress signals which we refer to as complexity gain are considered in this paper.

A task is a distribution $D$ over sequences from $\mathcal{X}$ . A curriculum is an ensemble of tasks $D_1, \ldots D_N$ , a sample is an example drawn from one of the tasks of the curriculum, and a syllabus is a time-varying sequence of distributions over tasks. A neural network is considered as a probabilistic model $p_\theta$ over $\mathcal{X}$, whose parameters are denoted $\theta$.

The classic algorithm for adversarial bandits is Exp3, which minimize regret with respect to the single best arm evaluated over the whole history. However, in the case of training neural network, an arm is optimal for a portion of the history, then another arm, and so on; the best strategy is then piecewise stationary. The Fixed Share method addresses this issue by using an $\epsilon$-greedy strategy. It is known as the Exp3.S algorithm. 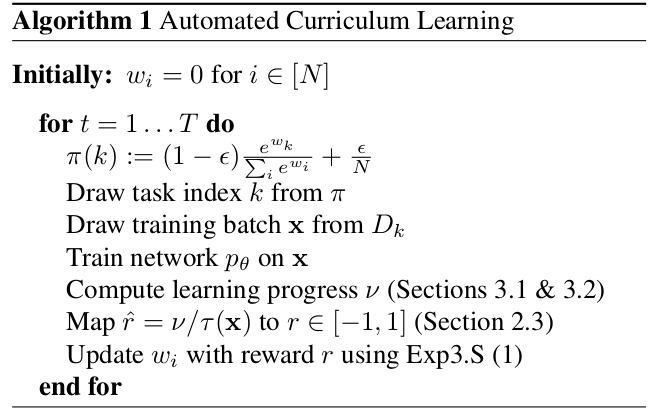