One reason for the slow adoption of curriculum learning is that its effectiveness is highly sensitive to the mode of progression through the tasks. One popular approach is to define a hand-chosen performance threshold for advancement to the next task, along with a fixed probability of returning to earlier tasks, to prevent forgetting (Sutskever and Zaremba, 2014). However, as well as introducing hard-to-tune parameters, this poses problems for curricula where appropriate thresholds may be unknown or variable across tasks.

The main contribution of the paper is that a stochastic policy, continuously adapted to optimize learning progress is proposed. Given a progress signal that can be evaluated for each training example, we use a multi-armed bandit algorithm to find a stochastic policy over the tasks that maximizes overall progress. The bandit is non-stationary because of the behaviour of the network, and hence the optimal policy evolves during training. Moreover, variants of prediction gain, and also a novel class of progress signals which we refer to as complexity gain are considered in this paper.

A task is a distribution $D$ over sequences from $\mathcal{X}$. A curriculum is an ensemble of tasks $D_1, \ldots D_N$, a sample is an example drawn from one of the tasks of the curriculum, and a syllabus is a time-varying sequence of distributions over tasks. A neural network is considered as a probabilistic model $p_\theta$ over $\mathcal{X}$, whose parameters are denoted $\theta$. In essence, for curriculum learning, there are two important settings: the multiple tasks setting and the target task setting. For the multiple tasks setting, the goal is to perform well on nearly all tasks in the ensemble. On the target task setting, the goal is to minimize the loss on the final task.

The classic algorithm for adversarial bandits is Exp3, which minimize regret with respect to the single best arm evaluated over the whole history. However, in the case of training a neural network, an arm is optimal for a portion of the history, then another arm, and so on; the best strategy is then piecewise stationary. This is generally the case in this paper, as the expected reward for each task changes as the model learns. The Fixed Share method addresses this issue by using an $\epsilon$-greedy strategy. It is known as the Exp3.S algorithm. 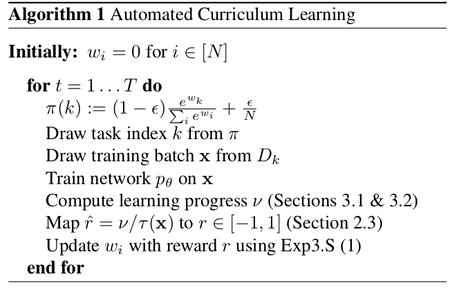 The learning progress is the measurement of the effect of a training sample on the target objective. It usually is computationally undesirable or even impossible to obtain. Therefore the authors consider a range of signals derived from two distinct indicators of learning progress: 1) loss-driven, in the sense that they equate progress with a decrease in some loss; or 2) complexity-driven, when they equate progress with an increase in model complexity.

Five loss-driven progress signals are used and they compare the predictions made by the model before and after training on some sample $\mathbf{x}$.

Gradient prediction gain (GPG) This measures the magnitude of the gradient vector, which has been used an indicator of salience in the active learning samples \[ v_{GPG}:= || \triangledown L(\mathbf{x},\theta)||^2_2 \]

The above signals are instantaneous in the sense that they only depend on x. Such signals are appealing because they are typically cheaper to evaluate, and are agnostic about the overall goal of the curriculum. The remaining three signals more directly measure the effect of training on the desired objective but require an additional sample $x'$.

The intuition for complexity gains is derived from the Minimum Description Length principle (Grunwald, 2007). It states that in order to achieve high generalization from a particular dataset, one should minimise the number of bits required to describe the model parameters plus the number of bits required for the model to describe the data. This is of significance only if the increase in model complexity strongly reduces the data cost. In the case of neural networks, MDL training is done via stochastic variational inference ( Hinton and Van Camp 1993; Graves, 2011; Kingma et al., 2015; Blundell et al., 2015)

In the stochastic variational inference framework, a variational posterior $P_\phi(\theta)$ over the network weights is maintained during training, with a single weight sample drawn for each training example. An adaptive prior $Q_\psi(\theta)$ are reused for every network weight. In this paper, both of $P$ and $Q$ are set as a diagonal Gaussian distribution, such the complexity cost can be computed analytically \[ KL(P_\phi|| Q_\psi) = \frac{(\mu_\phi-\mu_\psi)^2+\sigma^2_\phi-\sigma^2_\psi}{２\sigma^2_\psi}+\ln\Big( \frac{\sigma_\psi}{\sigma_\phi} \Big) \]

To test the proposed approach, the authors applied all the gains to three tasks suites: $n$-gram models, repeat copy, and the bAbI tasks.

Unidirectional LSTM network architecture was used for all experiments, and cross-entropy was used as loss function. The neural network was optimized by RMSProp with momentum of $0.9$ and a learning rate $10^{-5}$. The parameters for Exp3S algorithm were $\eta = 10^{-3}, \beta = 0, \epsilon = 0.05$. All experiments were repeated $10$ times with different random initializations of network weights. Two performance benchmarks are 1) a fixed uniform policy over all the tasks and 2) directly training on the target task (where applicable).

The first experiment is the character-level KneserNey $n$-gram models (Kneser and Ney, 1995) on the King James Bible data from the Canterbury corpus, with the maximum depth parameter $n$ ranging between $0$ to $10$. It should be noticed that the amount of linguistic structure increases monotonically with $n$.

Fig. 2 shows that most of the complexity-based gain signals (L2G, GL2G, GVCG) progress rapidly through the curriculum before focusing strongly on the $10$-gram task. The loss-driven progress (PG, GPG, SPG, TG) also tend to move towards higher $n$, although more slowly and with less certainty. The authors note that the curriculum is unnecessary for this particular experiment. The 10-gram source was best learned by directly training on it. The loss based methods also favoured high n-grams for training but took longer to do so. 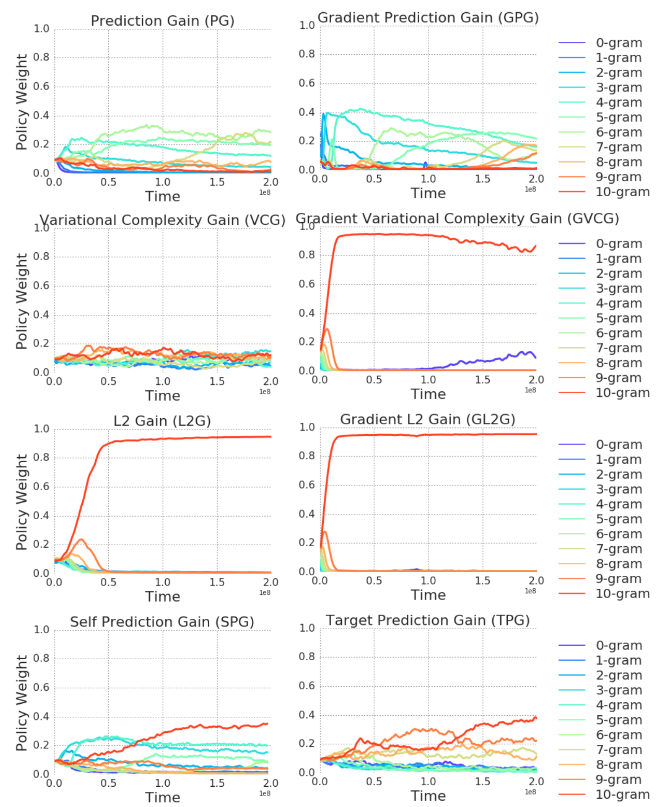 In the repeat copy task (Graves et al., 2014), the network is asked to repeat a random sequence a given number of times. Fig. 3 shows that GVCG solves the target task about twice as fast as uniform sampling for VI training, and that the PG, SPG and TPG gains are somewhat faster than uniform, especially in the early stages.

The bAbI dataset (Weston et al., 2015) includes $20$ synthetic question-answering problems designed to test the basic reasoning capabilities of machine learning models. BAbI was not specifically designed for curriculum learning, but some of the tasks follow a natural ordering, such as ‘Two Arg Relations’, ‘Three Arg Relations’. The authors hope that an efficient syllabus could be found for learning the whole set.

Fig. 4 shows that prediction gain (PG) clearly improved on uniform sampling in terms of both learning speed and number of tasks completed; for SPG the same benefits were visible, though less pronounced. The other gains were either roughly equal to or worse than uniform.

Fig 4. Completion curves for the bAbI curriculum, truncated at $3.5\times10^8$ steps. All curves are averages over $10$ runs

1. The experiments suggest that a stochastic syllabus can improve the significant gains when a suitable progress signal is used.

2. The uniform random task is a surprisingly strong benchmark. This is because learning is dominated by gradients from the tasks on which the network is making the fastest progress, thereby simulating a kind of implicit curriculum but with unnecessary samples.

3. The learning progress is best evaluated on a local, rather than global basis. In maximum likelihood training, prediction gain is the most consistent signal, while in variational inference training gradient variational complexity gain performed best.

In curriculum learning, a popular approach is to define a hand-chosen performance threshold for advancement to the next task, along with a fixed probability of returning to earlier tasks, to prevent forgetting. It is interesting to compare the performance of it and the proposed automated curriculum learning methods.

Here the assumption is that there is a pre-existing database with learning exemplars to sample from, but what if this isn't available? Forestier et al. tries to answer that problem.