Neural Machine Translation (NMT), which is based on deep neural networks and provides an end- to-end solution to machine translation, uses an RNN-based encoder-decoder architecture to model the entire translation process. Specifically, an NMT system first reads the source sentence using an encoder to build a "thought" vector, a sequence of numbers that represents the sentence meaning; a decoder, then, processes the "meaning" vector to emit a translation. (Figure 1)[1]

Problem: Choosing the word with highest score at each time step t is not necessarily going to give you the sentence with the highest probability(Figure 3). Beam search solves this problem (Figure 4). Beam search is a heuristic search algorithm such that at each time step t, it takes the top m proposal and continues decoding with each one of them. In the end, you will get a sentence with the highest probability not in the word level. The algorithm terminates if all sentences are completely generated, i.e., all sentences are ended with the <EOS> token.

2) Building another two modules for the value network, a semantic matching module and a context-coverage module. The semantic matching module estimates the similarity between the source and target sentences. The context-coverage module measures the coverage of context used in the encoder-decoder layer obseraving the fact that better translation is generated when using more context in the attention mechanism.

In conventional reinforcement learning, a value function describes how much cumulated reward could be collected from state s by following certain policy π. In NMT, consider $x$ and $y_{<t}$ as the state, $π_{Θ}$ as policy which can generate a word (action) given any state. The value function characterizes the expected translation performance (e.g. BLEU score) when using $π_{Θ}$ to translate $x$ with the previous t-1 words, $y_{<t}$. The value function is defined as:

Context-Coverage (CC) Module: It is often observed that more context covered in the attention model leads to better translation. CC is built to measure coverage of information in the network. Similarly as the process in SM modeule, the process is defined as:

The author compare their proposed NMT-VNN with two baseline models, the classic NMT with beam search (NMT-BS)[6] and the one referred as beam search optimization (NMT-BSO), which trains a predictor to evaluate the quality of any partial sequence, and then uses the predictor to select words instead of the probability. Note the difference between NMT-BSO and their NMT-VNN is NTM-BSO predicts the local improvement of BLEU for any single word, while NMT-VNN predicts the final BLEU score and use the predicted score to select words.

For NMT-VNN and NMT-BS, they first set experimental parameters to train an NMT model following [6]. The vocabulary for each language is the most common 30K in the parallel corpora and the words not in the vocabulary (i.e., unknown words) were replaced with a special token “UNK". Each word was embedded into a vector space of 620 dimensions, and recurrent unit has dimention of 1000. Sentences with length ≤ 50 were kept in the training set. Batch size was set as 80 with 20 batches pre-fetched and sorted by sentence lengths.

During testing, the hyperparameter $𝛼$ for NMT-VNN was set by cross validation and they found the optimal $𝛼$ for En→Fr, En→De and Zh→En are 0.85, 0.9 and 0.8 respectively. They used We used the BLEU score [9] as the evaluation metric, which is computed by the multi-bleu.perl[10]. Beam search size was set to be 12 for all the algorithms following the common practice [11].

From Table 1 shows that the NMT-VNN algorithm outperforms the baseline algorithms on all tasks, especially for harder level translations (Zh→En). 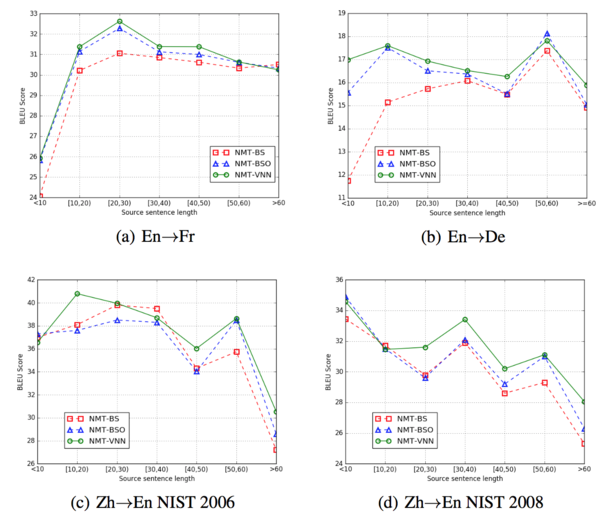