Difference between revisions of "Robust Imitation of Diverse Behaviors"

The authors first introduce a variational autoencoder (VAE) for supervised imitation, consisting of a bi-directional LSTM encoder mapping demonstration sequences to embedding vectors, and two decoders. The first decoder is a multi-layer perceptron (MLP) policy mapping a trajectory embedding and the current state to a continuous action vector. The second is a dynamics model mapping the embedding and previous state to the present state while modeling correlations among states with a WaveNet. A conditional GAN is used for the GAIL step. GAIL is what actually generates the policy, but it is conditioned/initialized based on the VAE latent state. 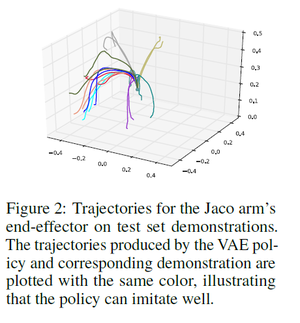