According to the Support Vector Machine, if we have a set of m samples: S = {(x1,y1), (x2,y2), …, (xm,ym)}, where xi 𝜖 Rn for all i and yi 𝜖 {-1,1}, and hyperplane wx + b = 0 separate the set exactly with the distance from the hyperplane to the nearest sample is maximum, then this hyperplane will be called an optimal hyperplane. This is also known as the maximum margin hyperplane. 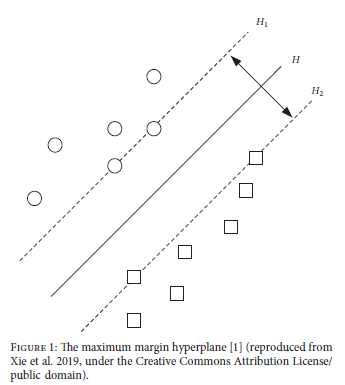 The SVM is much stronger than many other classification methods as we are able to classify in the higher dimensions with the use of Kernel methods. In the kernel methods, we map the sample from the original space to a higher dimension and then we construct a hyperplane that separates the samples in higher-dimensional space.

Using the kernel method leads us to a minimization problem for :

And finally, our final decision function is:

There are many indirect classification methods based on SVM: one-versus-one method, one-versus-all method directed acyclic graph method, error-correcting output codes method, binary decision tree method, and hierarchical multiclass SVM algorithm. The principle of the SVM multiclass classification method based on Decision Tree (DT) is to construct a decision tree recursively so that each layer can separate one or more classes from the rest of the classes. The “error accumulation” phenomenon during the construction process is the error occurring at a certain node will spread to the next layer of nodes, making the classification error of the next level further expand. Therefore, the higher the node where the error occurs the larger the scope of the error’s influence.

The key to reducing the error accumulation is separating the easily distinguishable classes first and reducing the error rate of the upper nodes as much as possible. The binary tree classification algorithm based on SVM uses the minimum distance method as the between-classes separability measure. The separation measure is defined in [1] as “the distance between the centre of two types of samples and the ratio of the variance sum of the two types of samples themselves. However this measure does not take “between classes variance” into consideration which could have a profound impact on the result.

The Design of IBDT-SVM Algorithm

2. Class Grouping Algorithm Based on the Principle of Class-Grouping by Majority

The algorithm is as follows:

Assume that there are M classes of input data, and class i contains ni samples, then n1+n2+…+ ni = n. The IBDT process is:

The Numerical Experiments and Results

Five multiclass datasets are chosen for 10-fold cross-validation to calculate the classification accuracy for each model. The models include OVO, OVA, BDT-SVM, VBDT-SVM algorithm, and the newly proposed IBDT-SVM algorithm. The datasets chosen have different sample sizes, categories and attributes to see how well the models perform on a wider range of data with different statistical properties. It is to be noted that the OVO algorithm performs considerably well for most datasets except for Breast Tissue where the lack of data could have affected predictions, whereas IBDT-SVM performs comparatively well for all datasets irrespective of different properties as shown in table 2 below. This implies that overall, the IBDT-SVM algorithm has greater stability and improved classification predictions in comparison with the other models. The numerical results can be summarized as shown in table 8 below where the average classification accuracy of all 10 experiments is calculated for each dataset.

Table 1: The information of the datasets in this study

The authors also discuss the future considerations to further improve the SVM algorithms such as constructing the decision tree based on SVM using the distance between each centre and the root node.